Photos by Danyelle Khmara
People protest a group holding a Trump rally in Reid Park on Aug. 8. Police put up a barricade to keep the warring factions separate.

Police lined a waist-high barricade during a protest at Reid Park, on Saturday Aug. 18. On the inside of the barricade was Patriot Movement AZ (PMAZ), a group whose members support Trump and the most far-right political candidates, including Senate candidates Joe Arpaio and Kelli Ward. Many in the group brandished guns on their hips. They flew banners and signs calling for deporting immigrants, re-electing Trump and defending semi-automatic rifles.

And on the outside of the barricade, an eclectic group of counter protestors, gathered to denounce the group largely viewed as being white supremacist. Winged stilt walkers danced to a marching band. Clowns theatrically laughed and cried, falling to the ground before the men with guns. Counter-protestors ranged from punks with tattooed faces to parents wearing sun hats and birkenstalks, their children in toe. 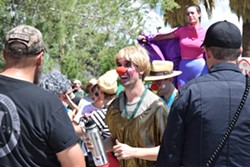 A faction of counter protestors wearing all black, with helmets and handkerchiefs covering their faces, stood at the front and held two large signs: “Rest in Power Heather Heyer” and “No one is illegal on stolen land.”

They wouldn’t take questions from the press but were handing out a flyer that explained the garb as being necessary to protect their identities against alt-right retaliation. The flyer also said they are there to keep things safe, not to instigate violence.

PMAZ rented the two ramadas that day. On Facebook, they called the event “Tucson March Against Far Left Violence.” A shade tent housed their pulpit, with speakers blaring out their cause. At the picnic tables, they had supplies to keep their own children busy, with a few sitting around looking bored. A man sold shirts bearing slogans with anti-immigrant sentiments. “I hope you tell both sides of the story,” he said to me, as I walked by, taking photos.


“I’m coming after every la raza member involved with the Mexican government,” said Edna San Miguel, a primary Congressional candidate running in Rep. Raul Grijalva’s district. “The Mexican government is the greatest enemy to our nation.” She yelled into the microphone, pointing at the crowd outside the barricade, telling them they’re indoctrinated with hate. 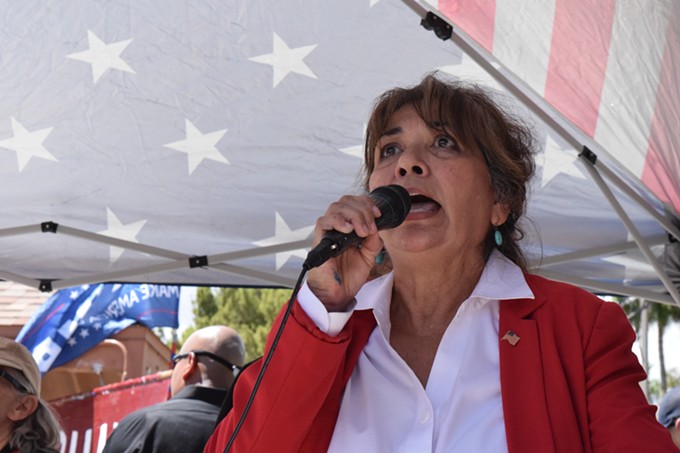 A man with what looked like a billy club in his pocket took the mic as well. He pointed into the crowd and said he was ready to blow the heads off any one of the protestors who knocked him down. Another woman took the mic and repeatedly yelled at the protestors to "get a job."


Flipping the script and saying the left is violent has become a common tactic of PMAZ and other far-right groups. While they are not totally wrong (Vox reported anti fascist protestors assailing police and journalists during an Aug. 12 protest in Charlottesville, Virginia), members of PMAZ have repeatedly made local news for hateful and intimidating behavior.


The national “Patriot movement" goes back farther than the local one, which seems to have formed in support of Donald Trump. According to the Southern Poverty Law Center, parts of group are composed of armed militias who believe in anti-government conspiracy theories with no basis in reality.


In March, two women affiliated with PMAZ received felony charges after going into a mosque, taking books out of a gated-off area and shouting anti-Muslim slurs at a man who approached them. One of the women had three of her children with her and encouraged them to join in the verbal attacks. This is just a portion of what happened during a Facebook live video, which has since been taken down. The Southern Poverty Law Center has a thorough (and disturbing) summary here.

PMAZ stands firmly against racism, bigotry, and anyone who harasses people based on sexual orientation. Those representing PMAZ are at all times law-abiding, too.


The actions of one bad apple makes all of us look bad. It is extremely disappointing and while we cannot tell anyone how to behave, we also need to have clear separation and call out bad behaviors. 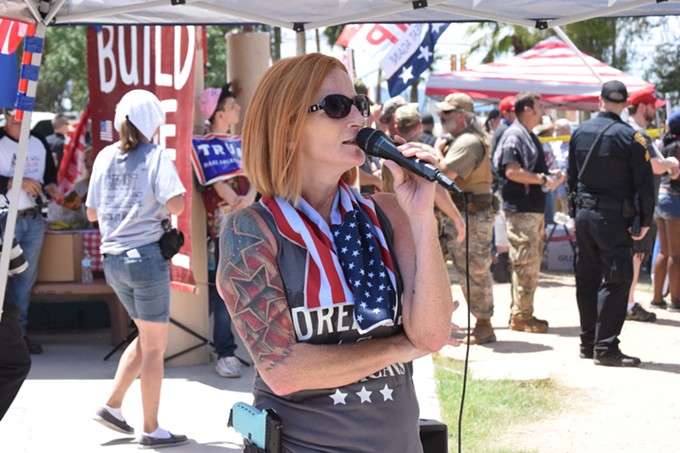 Patriot Movement AZ leader Lesa Antone
But this is not the only incident where PMAZ members have assailed people based on their skin color. The Arizona Republic reported on PMAZ members asking a Native American lawmaker if he was in the country legally.

Lawmakers said they were also questioned based on their appearance. Rep. Eric Descheenie, D-Chinle, said he was confronted by Trump supporters while helping defend a young student that he said was being harassed. They asked Descheenie, a Navajo lawmaker, if he was in the United States illegally.

“I’m indigenous to these lands,” Descheenie said. “My ancestors fought and died on these lands. I just told them, ‘Don’t ask me that question.’”

In a YouTube video from the incident, some of the groups members incessantly yelled at a group of people, including young children, “Get legal or get out of America.”


A few protestors did try to talk to the other side, asking questions about why they believe something so unfathomable to the other. 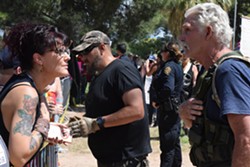 Tammie Duncan
Tammie Duncan, a Trump supporter, said she came down from her home in Las Vegas because a friend invited her to the event. She said she primarily supports Trump because of his stance on immigration, adding that she has two degrees but has trouble finding a job. She declined to say what field her degrees were in. She said she doesn’t think Trump is racist.

PMAZ did let some people take the stage who were not with their group.

Vana Lewis, a Tohono O'odham tribal member, took the microphone with a message of peace. She’s a member of both the Culture of Peace Alliance and their Nonviolent Legacy Project. In an interview after she addressed the crowd, she said a man of Mexican heritage who was with PMAZ had asked her to speak.


“I came with a message of peace, to neutralize the situation,” Lewis said “People have a built up aggression. Therefore, it’s going to come out in places like this where we don’t really need that to actually make stable change or hear each other out.”


She says even though it’s hard to find unity in such opposing views, we are all human, and if we remember that, negotiation is possible.


“Everybody needs a doctor. Everybody needs a home to sleep in,” she said. “So what do we do to make it all happen and come together? It’s hard to negotiate with something like this when we allow racism and we allow hate to come into our hearts. The bottom line is we’re all human and we’re all worthy of some human rights and basic necessities.” 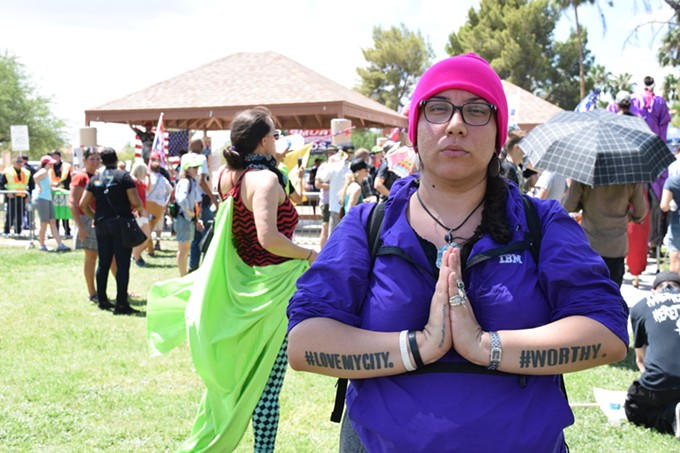