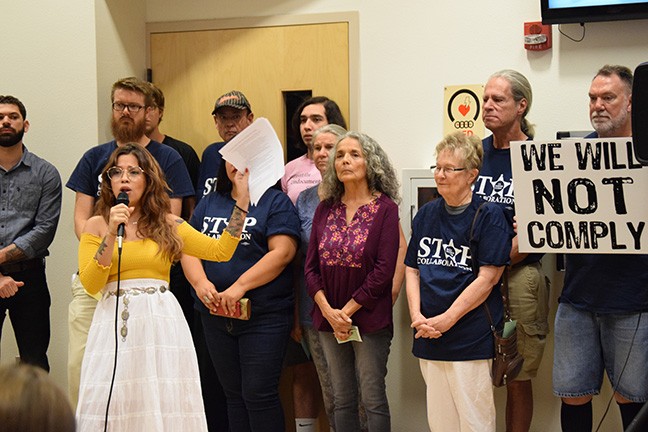 Danyelle Khmara
Zaira Livier, an activist with the People’s Defense Initiative and chairperson of the commission evaluating Stonegarden: “We will no longer accept policies that racially target migrant communities and families within our own town limits.”
Darío Andrade Mendoza faced a crowd gathered right outside the Pima County Board of Supervisors' Aug. 7 meeting. The 23-year-old's hands shook as he read the statement he prepared about his mother being sent to an Immigrations and Customs Enforcement detention center. A video of the commencing Supervisors meeting played on a screen behind him.

"In my short life, the most pain I've ever felt came from the collaboration from Border Patrol and local law enforcement," he told the crowd of press and supporters.

Local activists with Free the Children Coalition, consisting of people from at least a dozen activist groups and nonprofits, were there to demand the supervisors turn down a $1.2 million federal grant with the Operation Stonegarden Program, which supports collaboration between federal immigration enforcement agencies and local law enforcement. The group was also protesting ICE's presence in the Pima County Jail and other immigration and human-rights issues.

Andrade Mendoza, a DACA recipient and executive team member with Scholarship A-Z who's lived in Tucson for more than 15 years, says four days before Christmas Eve 2013, his mom was on her way to Safeway when she was pulled over for "too much smoke coming out of the car." Border Patrol arrived, and by the end of the night she was at Eloy Detention Center.

"To watch your mom be taken from your arms, see her get handcuffed and see the confusion and fear come back to her eyes—that broke me," he said. "That's a pain I don't wish anyone ever has to experience in their lives. I was 19 years old, and I had to fight my mom's deportation case."

While Andrade Mendoza's story is emblematic of the ways that local law enforcement acting as an arm of immigration enforcement can hurt people in the immigrant community whose only crime is being in the country illegally, it's not necessarily directly related to Stonegarden.

Pima County and local jurisdictions have been participating in the program and receiving the federal grants for more than 12 years. Until Trump became president and the efforts of ICE ramped up, the Stonegarden grant was a consent agenda item, approved without debate.

In that time, the county accepted about $16.5 million in federal grant funds and of that, $10.4 million went to overtime to deploy deputies into underserved rural areas that Pima County Sheriff Mark Napier says are heavily used for drug trafficking. About $6 million went to equipment.

The stipulations are: making sure the grant covers all overtime costs associated with Stonegarden activities, creating county oversight, ensuring there's a process for collecting appropriate data and information, developing a policy on how local law enforcement interact with federal immigration agents, and creating a committee to oversee the potential issue of racial profiling.

Napier said his office has complied with all five conditions, which was confirmed in a memorandum by County Administrator Chuck Huckelberry. Napier said they also created an anti-racial-profiling policy, and he's meeting with the American Civil Liberties Union to see where it can be improved. Per the last stipulation, the county created the Community Law Enforcement Partnership Commission to request data, review it and make recommendations to the Board. Each board member had the opportunity to appoint two members, but Supervisor Ally Miller didn't appoint anyone, and Supervisor Steve Christy only appointed one member. As well, Napier and the Tohono O'odham Nation Department of Public Safety Director Richard Saunders are on the commission.

But not everyone agrees with that assertion that the five stipulations have been met. Kristen Randall, vice-chairperson on the commission and a leader with Indivisible Southern Arizona, said she believes Napier did his part to meet the five conditions, but through no fault of his own, there are two yet to be completed: the collection of appropriate data from all participating jurisdictions and, although the commission has indeed formed, they haven't received all the data or had time to review what they have received.

The commission received data from jurisdictions including the police departments in Marana, Oro Valley, Sahuarita and Tucson. But the Tohono O'odham and South Tucson departments turned in incomplete data, all of which the commission only received during their last meeting before the Board of Supervisors met. Huckelberry said that because the commission had been formed, although they haven't been able to make any recommendations yet, the conditions have been fulfilled. And he recommended that the Board vote to accept the funds.

Randall asked they not accept the funds until both of those conditions had been fully met, citing a July 15 memo from Huckelberry. In regards to not receiving complete data, he wrote: "...obtaining useful information has been problematic and if this request for data continues to be as difficult as it has been to date I will recommend that the Board terminate the Stonegarden Grant."

Billy Peard, an attorney with the ACLU's Tucson office, says ending Stonegarden and removing ICE from the Pima County Jail is really about completely ending the collaboration between local law enforcement and federal immigration enforcement.

He says due to Stonegarden, a greater number of people end up in the county jail, and ICE agents being in the jail completes a circle of collaboration between federal and local agencies that leads to more undocumented people, with varying degrees of charges, being sent to ICE detainers.

ICE agents have been in the jail since early 2017, shortly after Napier, a Republican, took the place of Chris Naños, a Democrat who was appointed to job but lost reelection to Napier. The way it works is if Pima County is about to release someone, but that person has an ICE detainer, immigration enforcement agents are waiting there to take them to an ICE detention center.

"We've heard that many of the folks are dangerous that are subject to ICE detainers," Peard said. "That cannot be further from the truth. The local law, the local criminal justice systems are already in place. We don't need additional assistance from ICE in our jail to keep our local community safe. There's no role for ICE."

Peard argues that involving immigration enforcement officials in matters of local public safety means people are less likely to report dangerous crimes due to fear of deportation and/or being racially targeted.

Although many Latinos are not immigrants and many immigrants are not undocumented, they may fear for friends or family members who are undocumented. A drop in Latinos reporting crime has been well-documented since Trump took office. National Public Radio reported that major cities across California saw a drop in Latinos reporting spousal abuse. And the website FiveThirtyEight.com reported Latinos in large cities across the country were reporting fewer crimes, including Los Angeles, Houston, Dallas, Denver and Philadelphia.

Napier says it's not true the grant money is used in the deportation of undocumented immigrants with no serious criminal history. He said the grant is about interdicting transnational crime organizations.

"No one can dispute the fact that we're a major trafficking corridor for both human trafficking and drug trafficking," Napier said. "I would be remiss if I did not take federal resources to help me combat those issues."

Napier says that through the Stonegarden collaboration, he's a strategic partner, and Homeland Security Officials have to listen to him, adding that he told HHS Secretary Kirstjen Nielsen to tell the president, "Shut up about illegal immigration."

"I'm not interested in illegal immigration," he said. "I'm a law enforcement public safety professional. I'm interested in what has a detrimental effect to public safety in our county, and that is drugs and human trafficking, the transnational crime threat but also the terrible plight and the human rights violation that the porous border has. My deputies recover about 200 bodies a year in the deserts of this county. That's a human rights tragedy."

Zaira Livier, an activist with the People's Defense Initiative and chairperson of the commission evaluating Stonegarden, said the protestors also demand an end to criminalization of migrants and asylum seekers and that city and county officials push their way into Southwest Key, the Tucson facility holding migrant children.

Southwest Key has also been very opaque, including not releasing information on how many separated children have been reunited with their families since facility staff told a group of touring lawmakers in June that there were 73 children still waiting to be reunited with their families. News outlets also recently reported on sexual abuse allegations inside the facility

"Let's be explicitly clear, the acceptance of Operation Stonegarden funds by Pima County has been separating families in our community since 2004," she said. "We will no longer accept policies that racially target migrant communities and families within our own town limits."