Live Theatre Workshop tests whether love is just a side effect 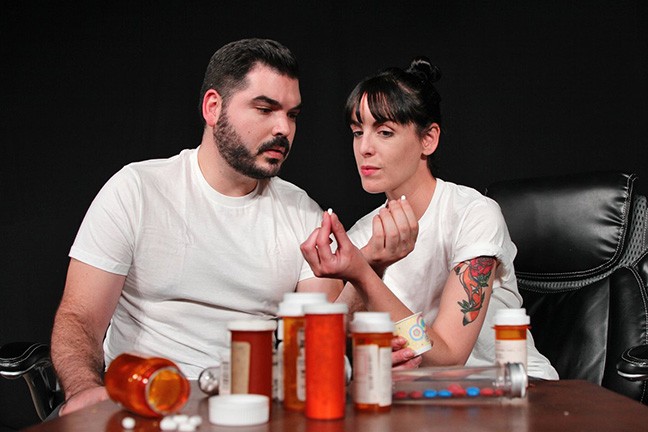 Courtesy
Emilee Foster (Connie) and Steve Wood (Tristan) muse over whether their love is real or just an experimental byproduct in The Effect.

Live Theatre Workshop, which labors diligently though the entire calendar year, has segued from a silly, lightweight piece that can barely be called a play, to a heavily-weighted piece that muses seriously about the nature of the human brain and the man-devised pharmaceuticals that can alter it. That serious-minded play, following on the heels of a very silly something called Red White and Tuna, is The Effect, by Lucy Prebble.

Prebble's play is an exploration of a complex but commonplace situation of modern life. We report feeling down and maybe a little sad; we don't feel like ourselves. We are handed antidepressants, in an effort to upgrade our mood and consequently, it is assumed, our quality of life. (There are, of course, those who are completely paralyzed by depression and anxiety and become suicidal. But this more extreme form of depression is not really addressed in Prebble's play.)

Who, then, are we? Who do we become when medicated? What dictates our states of mind, our feelings? Are we just a bunch of firing—or misfiring—neurons? Or is there a mind separate from the biological "gray matter"? Are the feelings that result when altered by pharmaceuticals really ours? What, after all, do we consider "real"? Chemical reactions in our brain are creating our emotional discomfort, right? Is all behavior chemically dictated then? If pills cause chemical reactions that result in a lighter, happier frame of mind, can we actually call the resulting frame of mind "ourselves"?

Pretty heady stuff. Within these heaps of questions, also including some regarding ethics, Prebble is most focused on the feeling of love; secondary is the issue of depression.

Prebble's play, for all its questions

about feelings, is a play of ideas, and plays about ideas can fall pretty flat. The plot can seem artificial. But here she devises a story that can support a discussion of dense ideas pretty well.

The issues at the core of Prebble's piece are played out by Tristan (Steve Wood) and Connie (Emilee Foster), two 30-somethings signed up to be paid guinea pigs testing the efficacy of a new drug. Tristan seems to be a happy-go-lucky guy who plans to use the money he gets from the study to go hiking. Connie is studying psychology, so she might be conducting a little experiment of her own, although that's not really clear. The head of the drug company, Dr. Toby Sealey (Jon Thuerbach), supervises the psychiatrist in charge of conducting the hands-on aspect of the study, Dr. Lorna James (Avis Judd). It turns out that these two have a history, which has unexpected consequences within the story.

There are strict rules governing the study, of course, including no cell phones and certainly no romantic co-mingling. But wouldn't you know? Tristan and Connie begin having rather extreme sensations and reactions: increased heart rate, intestinal distress, heightened vision, a bit of mania, even. Have these been triggered by the drug or by Tristan and Connie's attraction to each other? They play fast and loose with the rules and with each other while still the question looms: Are the two in love, or are they merely experiencing effects of the drug? And if matters weren't complicated enough, all this is unfolding with them unaware of whether they are actually taking the drug or a placebo.

At the same time Dr. Sealey and Dr. James have conflicting opinions about depression and drugs. He declares the defining moment of medicine in his lifetime is the development of psychopharmacology and that depression is a result of chemical imbalances that can be treated with the right drug. Dr. James counters that in the future what is known as chemical imbalances will seem as archaic as "the four humors." And, she charges, "You know us so-called 'depressed people' have a more accurate view of the world, a more realistic view of themselves and others."

Director Maryann Green has gathered a solid cast to lead us through this hypothesizing, and together they lay out Strebble's complex issues clearly. There are a few things we are asked to accept (both by the play and the production) that are rather clunky, but they don't gum up the works too much. The piece moves along well, although on opening night, it seemed not to have found its stride timing-wise, unable to give us a full sense of the peaks and valleys of the tale's movement. For example, it's was hard to know when the play deposited us at intermission or when the action had concluded at the end. This often happens with productions, and usually the players find the rhythm and the resulting impact as the run continues.

Strebble is almost clinical in her approach to creating drama, but its carefully wrought layout of things to ponder ultimately dampens our attempt to attach to it emotionally—to be affected by it. The LTW crew's efforts make sure we get the ideas at the heart of the piece; or, perhaps we should say the ideas at the center of the piece, because it's hard to find its heart—the part that allows the tale to get under our skin. Part of the issue is that the attraction between Tristan and Connie doesn't ring true. We really get no sense of—forgive me—chemistry between the actors. The characters may be in a sort of no-man's land concerning what they are feeling and whether or not it's artificially induced, but their dilemma puts us in a similar one.

The technical aspects of the production support it satisfactorily, although Richard Gremel's set seems too visually busy. Brian McElroy's sound design is quite effective.

We are just beginning to learn about that complex organ we call the brain, and as happens so often, our study raises more questions than it answers. We also know that throughout history, humans have regularly used substances to alter their sense of reality. And we don't have a clue about the long-term effects of taking antidepressants. Prebble and LTW bring us a thought-provoking story, and the issues it raises linger with us long after we leave the theater.