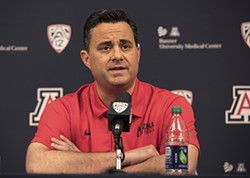 Simon Asher
Sean Miller and the Arizona Wildcats will play in the Maui Invitational this November, against teams like Iowa State, Gonzaga, Duke, Xavier and San Diego State.
It may be 110 and swelteringly hot outside in the bastions of Southern Arizona, but we're mere months away from the temporary solitude of watching a bunch of unpaid athletes playing basketball inside an undersized gym in the tropical paradise that is Maui.

The young men of the Arizona Wildcats will take center stage at this year's event in Hawaii, playing with fellow heavyweights Duke, Xavier, San Diego State and Gonzaga at this year's Maui Invitational.

The Wildcats' tropical getaway starts with a matchup against Iowa State in the 35th iterate of the tournament, with the game tipping off at 7:30 p.m. Arizona time on Monday, Nov. 19 in Lahaina.

From there, the Wildcats or Cyclones will face the winner of the Gonzaga-Illinois game, with the final pairing of either Auburn, Xavier, SDSU or Duke in the finals on Nov. 21.

The Wildcats are making their first appearance in the tournament since 2014, when they won their seventh Maui Invitational title.

Arizona Coach Sean Miller is thrilled to head back to the island, saying his team will learn a lot from the experience.

“Our program is honored to once again be a part of one of the storied events in college basketball.
Arizona Basketball and the Maui Jim Maui Invitational have a great history together that goes back
years. This season’s bracket is full of excellent programs and will prove to be one of the marquee events in our game yet again. Our players, staff and great fans are excited for another tremendous trip to Hawai’i.”

They are tied with the University of North Carolina for the most titles in the tournaments's history, which dates back to 1982.

Ticket packages to the November hardwood free-for-all are sold-out, but can still be found sparingly on the Invitational's website.
© 2023 Tucson Weekly