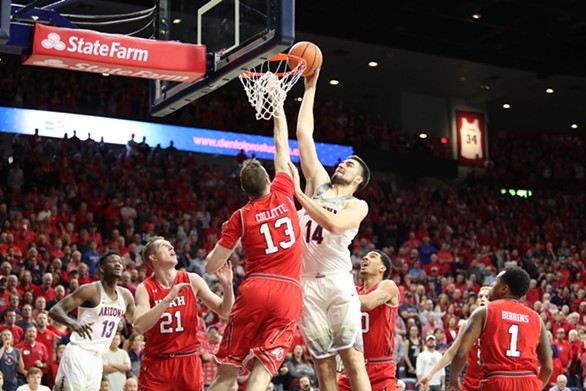 Arizona Athletics
Arizona senior forward Dusan Ristic was named to the Pac-12 All Conference team, averaging 12.1 points per game and 7 rebounds in 2017-18.

We're midway through the doldrums of summer in the heart of the Sonoran Desert, which means that college basketball is four months away.

The University of Arizona's quest to repeat as regular season conference champions begins with road games against the University of Colorado and Utah, followed by a Bay Area swing through Stanford and Cal the following week.

The 'Cats home opener will take place the week of January 16, when Oregon and Oregon State come to the Old Pueblo, followed by UCLA and USC the following week.

The biannual rivalry with the Arizona State Sun Devils takes place the week of Jan. 30—when Arizona will travel to Tempe's Wells Fargo Arena, followed by a home clash at McKale on the final weekend of the season, on the week of March 6.

All times and TV carriers will be announced at a later date for said games, with all 108 of the Pac-12 conference contests carried by either the Pac-12 Network, ESPN, Fox or CBS.

Former Arizona big man Dusan Ristic officially signed his name on the dotted line with one of his home country's most prominent clubs, Red Star Belgrade, on Monday.

The 7-foot center, who averaged 12.2 points and 6.9 rebounds per game as a senior, grew up in Nova Sad, some 58 miles from the Serbian capital city.

The lanky Serb said joining Red Star is a dream come true, returning to play the game he loves on his home soil.

“I’m more than excited to announce that I will start my professional basketball career at the European powerhouse Red Star Belgrade,” Ristic said on Twitter. “Just like the University of Arizona basketball team, Red Star has an extremely rich history, tradition, and amazing fans. I’m thrilled to continue my career with a high level team, and to keep representing the University of Arizona worldwide.”

Ristic previously played for Red Star in 2013-14, according to EuroHoops, appearing in two EuroLeague contests.

Fellow Arizona basketball alum Kadeem Allen was waived by the Boston Celtics Sunday, just over a year after the team drafted him in the NBA Draft's second round.

Allen averaged 1.1 points and 0.7 assists in 17 games with the Celtics a year ago, splitting time between the Celtics and their Development League affiliate, the Maine Red Claws.

Allen excelled during his two years playing under Arizona Coach Sean Miller, averaging 9.1 points, 3.6 rebounds and 3.3 assists in 68 games with the Wildcats.

Allen's contract was a two-way deal, meaning his salary would have been fully guaranteed for the 2018-19 season if he remained on the team's roster, according to Boston.com.

The move reportedly allows the Celtics to sign another two-way player to their roster, the report said.
© 2023 Tucson Weekly