A mom’s rebirth into the LGBTQ Community 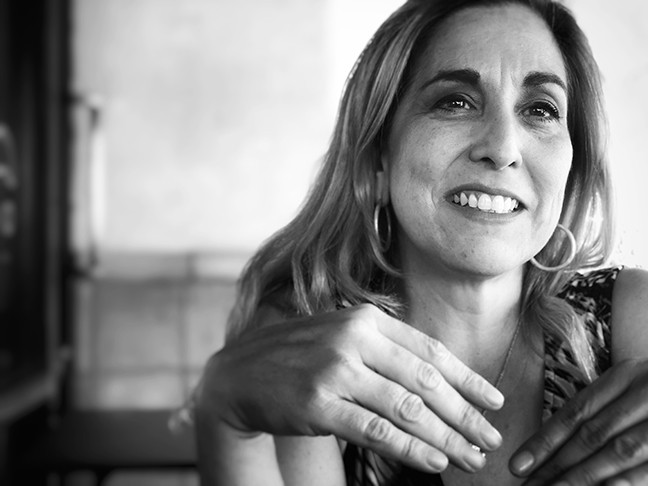 Noreen Olsen looks young to have had a 28-year-old son.

"I'll take that as a compliment," she says.

She sips coffee at a table outside a suburban Tucson Starbucks, to piped-in smooth jazz. She wears a flowing purple dress, gold hoop earrings and open-toed shoes topped with leather roses. Dusty sharp voice, thick brownish-blonde hair falling past her shoulders. It's hot out but she's not sweating. There's an air of wry self-assurance about her. Says it herself, "I get along with everyone."

At first blush the Brooklyn-born Noreen is PR savvy and says only what she wants to say. It's hardly a wonder she's good at the sell. Mostly houses now; real estate. Broadcast TV media sales in Tucson and Phoenix before that. If not otherwise known, I'd have never guessed she has taken on a community of emotional orphans. That is, helping to nurture the old and the young of Tucson's LGBTQ (lesbian, gay, bisexual, transgender or queer) community, to prevent tragedies like what happened to her son.

Her only offspring, Colby Olsen, died April last year, a few months after her father passed ("Last year was," she says, "horrific.")

In the early morning hours of April 11, Colby was headed north on Euclid, east of Grant Road. He lost control of his Kia, sped over the sidewalk, flipped and tumbled into a parked SUV in someone's front-yard. He wasn't wearing a seatbelt. His belted passenger was released from the nearby hospital with minor injuries.

Cops said drinking was involved in Colby's death. All of two people have brought that fact up to Noreen, saying, "Well, he was drinking." Mom winces at the thought. "My answer to that is I don't know what happened. The day he died he gave $40 for an Uber because some man was too drunk to drive. He used to always say he hated drunks. I'm not focusing on how he died. I want to celebrate how he lived. He impacted so many lives. In 10 minutes he was gone. That's not how you define someone's life. And anyone who knows me would know that if he was an asshole I would say so."

Three months after Colby's death Noreen began suffering chest pains, and thought it was a heart attack. "I thought, 'Here we go, this is it.' Someone said, call 911. I said, nah. I wanted the heart attack to go on. I wanted clarity." Her heart wasn't bad, her doctor said, just broken. He suggested anti-depressants and sleeping pills. Noreen declined. "I wanted to feel my son's death. Look, I'm a strong person. I wanted to feel every ounce of pain."

She recognized this particular strain of pain, a mother losing her son, and the life-altering darkness. She could succumb to it or do her best to let it expand her senses. She chose the latter and dove deeper into herself, intellectually, emotionally, physically.

"You don't recognize yourself. Even in the mirror. It's just so very primal. I never wailed in my life until my son died. I sounded like a wounded animal."

Tears well in her eyes and she steps from the table to dry her face in the restroom. She returns, apologizing. She continues, talking about the energy, and Buddha. A negotiation of emotions and feelings, pain to spirituality to intellectual logic, how it becomes energy. "A balancing act," Noreen says. "That energy is self-defining."

That energy flipped her internal script; her son's death lined up her future. She returned from the depths through charity and sharing with others: "I'm Jewish; I was into the Kabbalah long before Madonna," she laughs. She swings her hands down in the air over herself. "This is just a shell," she says. "The soul doesn't die. I feel him going through this with me."

In the days following Colby's death, Noreen hatched a plan for a foundation. It helped that there was an outpouring of love from some of Tucson's LGBTQ community, a few of whom had holed up at her house for weeks after his death, so she wouldn't be alone. "I couldn't sleep for days. And I heard all their life stories."

Her kinship with Colby's community is palpable. Surrounded by people who loved her son, she discovered his friends who suffered deep anguishes. She wanted to put herself in that community to feel their pain.

"I wanted to understand Colby's life. His love. I wanted to be in it," she says.

"If you still have parents kicking out kids for being gay and lesbian, what do you think parents are doing to transgender kids? The safety of transgender kids really scares me. And kids are realizing they're transgender younger too." She pauses. "We're going to have a huge problem if parents don't educate themselves."

She's beginning to talk to such parents now. "For some, it's like learning a new language. All people should engage in ideas that challenge."

Noreen soon launched the Colby Olsen Foundation, a 501c3. "OK, I'm a little naïve, a little Pollyanna, but it's amazing what happens when you say, 'I need your help.' I just started reaching out and calling."

Noreen did her research into the marginalized worlds by actively embracing the community that embraced her son. Facts came fast, like how 40 percent of all homeless youth are LGBTQ and likely to have been assaulted ("They get kicked out. They're dead vulnerable as LGBTQ. In 72 hours something happens.") How they're homeless because they're not accepted at school and home, bullied and even murdered. How LGBTQ seniors are discriminated against, have limited access to health care, live shorter lives and so on.

The foundation quickly became fulltime work, which Noreen balances with fulltime home sales. It now has 10 board members, and it's a diverse group, she says: "every letter of LGBTQ represented." Earlier this year they lost one board member when Stephanie Donoghue died. More death.

"There have been successes," Noreen says. "Private donors, for one. Working on corporate donors now."

It's most recent event, in June, was the foundation's fourth, a lip-sync contest, sponsored in part by Southwest Airlines. It filled up the courtyard at Tucson's sizable La Cocina bar and restaurant, drawing a cross-section of kids and adults, drag queens and parents, LGBTQ and greater Tucson community members.

Noreen is now ensconced in the LGTBQ community. "If you're a person by association, if your uncle, mom, son whatever is LGTBQ, you are too." There are many LGBTQ-friendly clubs in Tucson, including the long-running Tucson Pride, EON Youth, Tucson GLBT Chamber of Commerce and others. The Colby Olsen Foundation is, she says, "created from love, in my son's honor. But we're here to love each other, heal each other. It's not about me, it's a community foundation."

Colby was born in Tucson, attended Sabino High School, studied anthropology and sociology at UA. Mom married twice and describes Colby's biological father as a "free spirit." Colby's relationship with him she says was "good.""He was more of a mama's boy," Noreen says wrinkling her nose.

Looking back, "I wasn't sure if he was gay. I thought when he's ready he'll tell me." He came out to her when he was 19.

"Also, he felt bad about me never having grandkids."

Her face clouds over for a moment, then she's back, present, animated. Says, "because true love is a double-edged sword, there's a price you pay for that love. I'm a vessel of his, and some people look at me like I'm crazy."

She leans back, pulls her hair off her neck. "I'm still his mother," she says flatly. "It doesn't change."

Colby is often described as smart and funny, a man curious enough about the world to travel it. He'd been bartending at IBT's, a beloved Tucson gay bar. His memorial was so full, folks had to be turned away.

"Colby was a bright light full of hopes, dreams, fears, emotion and love for everyone he came in contact with," says Kevin DeCook, a foundation board member who met Colby working at IBT's. "We're all trying to carry on that light now."

These Trump times aren't so much different from the '50s when Sen. Clyde Hoey said all homosexuals were moral perverts who constituted government security risks, and President Eisenhower signed an executive order banning gays and lesbians from working for the U.S. government. Trump bud and serial predator ex-Chief Justice Roy Moore wooed a wide voter base by comparing homosexuality to bestiality. It's a deep-rooted mindset, pervasive and brutal. Could be the minority.

Hell, the '69 Stonewall rebellion was kickstarted by transgender women of color, Marsha P. Johnson and teen Sylvia Rivera. LGBTQ rights should've been assimilated into society years ago. Noreen, a white hetero woman—some might say Schwulenmutti—is, alongside other organizations, drawing attention to Tucson's LGBTQ community, as the Supreme Court continues to swing right. The work shouldn't go underappreciated. This is Humanism 101.

Standing in the backyard of her ranch-style home on Tucson's northeast side, Noreen reaches out and touches a dreamcatcher, one of many that hang from the fence, mesquite trees and the porch overhang. The Native American symbols of hope, healing and protection were placed here by many of Colby's friends, after his memorial. "I'm never taking these down," she says.

Sometimes people die for good things to happen. The sacrificial lambs. Noreen fingers a delicate copper-hued dreamcatcher that hangs around her neck, a gift. Her son's death revealed a larger truth to his mother.

"We all have to have a purpose in life," she says. "This is my purpose."

For more information, go to colbyolsenfoundation.org or the Colby Olsen Foundation Facebook page.