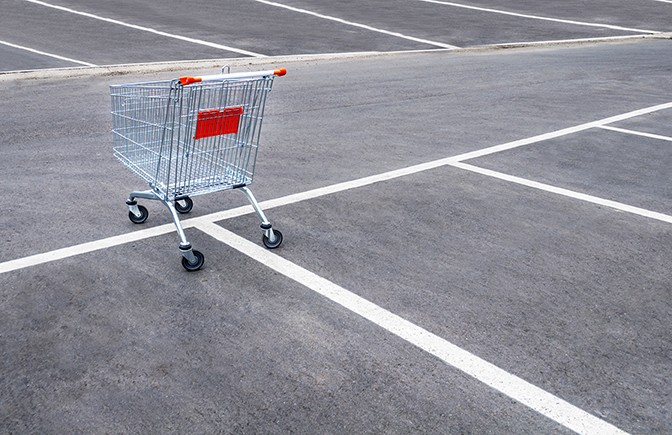 Following an unpleasant run-in with someone passionately objecting to her shopping-cart neglect, an Oro Valley woman at a WalMart told law enforcement she was being stalked by a "professional" in a black sedan hired to scare her, according to an Oro Valley Police Department report.

A police officer met the woman in person near the Walmart to hear her story. She'd just finished shopping in the store, she said, and was about to drive away, when "a male in a black car, [which] she believed had four doors and was a sedan, drove quickly into a parking spot where she was placing her cart after unloading." Then, "upon entering the parking spot, the car struck the shopping cart." (In other words, someone pulled into the space next to her and collided with the cart she'd left right next to her car instead of placing it in a nearby "cart corral" made for the purpose of returning it.)

Before she could get into her car, she said, the man had already exited his and grabbed the cart, telling the reportee that carts "should be placed in the correct spot, and not in a parking spot." At this point the woman had also apparently grabbed the cart again; when she tried to pull it away from him, "he pulled it harder," causing a small scratch on her left index finger. (Upon the officer's examination of her hand, which showed no injury, the woman assured him, "It is all better now.")

The reportee admitted she'd yelled at the man, "You're an asshole!" but said "he was also using profanity towards her."

Their shopping-cart tug-of war ended with the man gaining control of the cart and promptly pushing it to a cart corral. She said she'd been "too scared to look closely at the man's face," and she hadn't thought of getting his car's license-plate number, but she swore that when she looked up to see him walking back from putting her cart away, he'd changed his shirt from a from a plaid one to a blue one (or a black one—she wasn't sure). She also said she thought he was wearing an "arm band," but that it might've been a watch.

After the man returned the cart, she said, he "went about his business" and entered the Walmart.

She believed the incident wasn't just a random encounter but that "this individual was a professional ... hired by her daughter ... to scare her," since "she felt he was wearing a disguise" and she'd recently had a major conflict with her daughter (which she didn't describe).

She acknowledged she had no evidence that the event was connected to her daughter in any way "other than a feeling." When the officer explained that with so little information, the case would be closed, she said she understood.