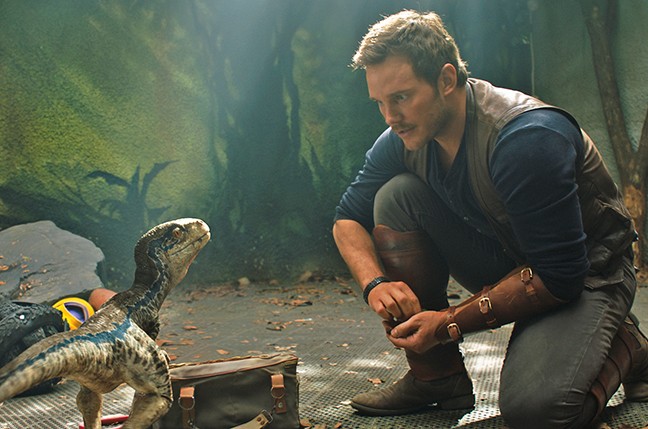 Courtesy
So that’s where Starlord ended up.

Jurassic World: Fallen Kingdom is a big dumb dino joke of a movie. It's nothing but a brainless, sloppy rehash of Steven Spielberg's original Jurassic Park sequel, The Lost World, with a lame militaristic angle thrown in. (Again!)

Yes, the dinosaurs look cool, and things get off to an awesome start with an underwater visit to the skeleton of the genetically engineered dinosaur, Indominus Rex, that died hard at the end of Jurassic World. The prologue is scary, looks great, is well directed, and seems to be setting the tone for a film that recalls the grim tone of Michael Crichton's original, excellent novel that spawned the film franchise.

Sadly, things degenerate badly after the title credits pop up, as the film becomes one half island adventure, one half dinosaurs rampaging on the mainland. The crazed fun that was the original Jurassic World is lost, replaced by conveyer belt, déjà vu, stale moviemaking.

When a volcanic eruption on the isle of dinosaurs threatens their genetically engineered lives, Congress holds hearings on whether to save them. These hearings involve the return of the one and only Jeff Goldblum as Dr. Ian Malcolm. Rather than having Goldblum around for his trademark psycho rambling and dark wit, his character just groans a couple of lines about how we shouldn't have made the dinosaurs because it goes against nature and they have really big teeth and might bite you. Then he goes away.

Owen (Chris Pratt) and Claire (Bryce Dallas Howard) return to the island to save Blue, the adorable velociraptor who wants you to pet him. Eventually, the action winds up in a large mansion in the states, where a nefarious businessman is keeping dinosaurs in the basement in order to auction them off in what amounts to a dinosaur fashion show for evil countries who want to weaponize them.

A rehash of a familiar plot is fine if done with skill and nuance (see Star Wars: The Force Awakens for a fine example). Fallen Kingdom goes the campy route, and it's dull, dull, dull. Everybody in this film appears to be going through the motions ("I hit my green screen mark! Where's craft services?").

How many times do we have to see a T-Rex inadvertently save the day? That was fine once, but the T-Rex is supposed to be scary, not our accidental hero. While I'm at it, knock it off with the good-natured velociraptor, too. Velociraptors should be ripping faces off, not playing fetch.

How many times do we have to see a billionaire old guy with an amber mosquito cane be presented in a sympathetic light, even though his genetic engineering blunder has put the world in terrible peril? Sweet and cuddly James Cromwell plays the former business partner of John Hammond (Richard Attenborough in the original trilogy), and he's just a nice guy whose goofs have sent some nice people through dinosaur digestive systems. In the original novel Hammond was a monster. Spielberg turned him into Santa Claus, and that trend continues with Cromwell.

Knock it off with the "dinosaurs as military weapons" crap. This was a bad, laughable idea when Spielberg considered it decades ago. A bad idea that tainted the original, somewhat fun Jurassic World, and now takes the forefront in this one.

Usually excellent director J.A. Bayona (The Impossible) is saddled with a dopey screenplay co-written by Colin Trevorrow, one that wants to be family friendly with just a hint of menace. Why not go the James Cameron's Aliens route with one of these sequels, get a hard R-rating, and give us a real dinosaur apocalypse? I don't want dinosaurs that can be controlled with clickers so we can all go "Awwww!" I want them to tear people's faces off! Characters should be shitting pants when they see a T-Rex, not breathing a sigh of relief because the T-Rex just took out another, meaner dinosaur before it ate them.

Jurassic World: Fallen Kingdom is the second part of a trilogy. Its ending hints at something cool for the next chapter. If it includes a T-Rex saving the world after joining the Marines, I'm done.