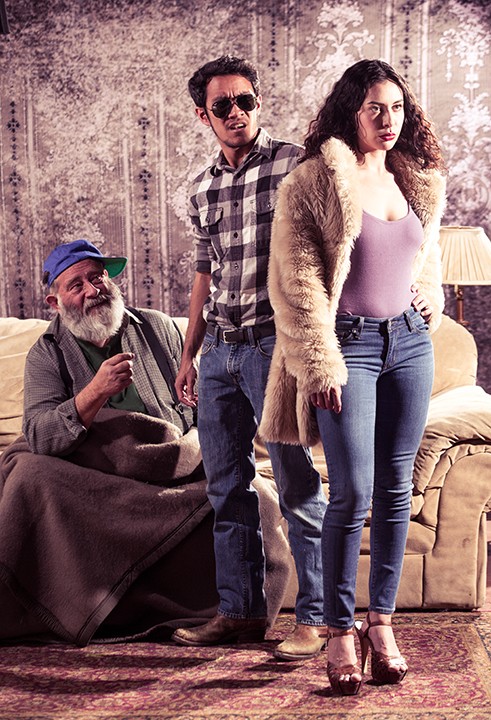 For the second time in a couple of months, Tucson's theater-goers have the opportunity to see Buried Child, Sam Shepard's 1979 Pulitzer Prize-winning play. This time it's the final production of the season for Winding Road Theater Ensemble. The play is a dark, dark drama/comedy that's a tangle of themes and symbols played out in a framework of realism resulting in, what? An indictment of family? An expose of an ugly, paralyzing sickness in America's heartland? The American dream itself?

One thing we all share is having been born into and somehow surviving a family. Whether it's traditional, broken, dysfunctional, adoptive, institutional or whatever, it is the unit that brings us into the world and instructs us in its ways. It is the bedrock of a society, and the health or disease of the family unit both reflects the state of a culture and, in reciprocity, influences the nature of a culture.

Portraits of families have long been a subject for playwrights, even those founding fathers of western drama, the Greeks.

In Shepard's take, he brings us a disturbing look at how it creates us and claims us and binds us in an uneasy but near unbreakable union, one from which we want to simultaneously escape and come home to. It also suggests a larger, more symbolic view of this particular family as a distillation of a soured America.

Here, we meet Dodge (Chad Davies), the patriarch and one-time farmer, now a sick, dying man covered with a ratty blanket on a ratty couch. His wife Halie (Roseanne Couston) calls from upstairs; they are not conversing so much as filling an emptiness. We meet son Tilden (Brian Taraz), who has entered holding an armload of fresh corn. He is shut down, uneasy from fear or trauma or—something. The corn raises suspicions in Dodge, who demands to know where Tilden got it. He claims that a whole field of corn was ripening out back, but Dodge says that can't be true; that the fields have been unproductive for decades, But Tilden is firm: the corn is there. Dodge warns Tilden to avoid trouble, and we learn that Tilden has returned to the farm because of some undisclosed trouble in New Mexico. Dodge reminds him firmly that he can't stay. We learn of another son, a soldier who was killed not on a battlefield but, claims Halie, at the hands of a Catholic wife. She tells Dodge there is to be a statue erected in town in his honor, one hand holding a basketball, the other a gun. We meet another son, Bradley (Gabriel Nagy), a hostile, threatening presence who lost a leg in a chainsaw accident and who comes when Dodge is sleeping on the couch and shaves his head. And from Tilden we hear of yet another son, an infant who died and was buried by Dodge somewhere on the land. The loss of the son, even the existence of the baby, has become part of the poisoned mythology of this strange family.

Into this anything-but-happy family scene come grandson Vince (Cole Potwardowski), Tilden's son, and his girlfriend Shelly (Brie Zepeda) who are driving west, hoping to visit Tilden in New Mexico. Dodge claims he doesn't recognize Vince; Tilden doesn't seem to, either. Shelly tries to be nice, but as the circumstances grow stranger, and even hostile, she looks for ways to escape.

Shepard's play is a complex, metaphorical and even poetic three acts. It deals with themes of incest and murder. It's anything but easy for a production team, or an audience, to chew on, no less digest. Winding Road takes a mighty stab at the piece, but a lack of clarity of vision about what the piece should deliver renders this production painfully obtuse.

To have any chance of understanding what might have been in Shepard's head when he conceived such a piece, it's important to understand when it was written and what was happening at that time in the U.S. It was produced in the late 1970s, a time of cultural revolution when the Vietnam war and Richard Nixon's lies exposed an America that had become perverse and diseased in the decades following its triumph in World War II. Young people were tuning in and dropping out in response to what they perceived was an ugly and hypocritical America.

But in this production, directed by Eva Zorilla Tessler, there is no real sense of time or place. The sparse and, frankly, ugly set gives us little clue. Shelly remarks when we first meet her that this reminded her of a scene from a Norman Rockwell painting, but there was none of that for us to see. Shepard's wild story needs to be anchored, and a visual context might help us understand more why this screwy mess is unfolding.

There needs to be an interpretive context as well, a strong, clear directorial vision that would help us to what might be at the bottom of Shepard's own vision. But this is inadequate as well.

Without being anchored, not only is the action confusing; the nature of the characters, what we learn of their history and what we witness of the play's story leaves us confused. Without a strong interpretive vision to guide characterizations, these are merely horrible, trashy people. We cannot empathize with these characters; we do not understand them, and are left not wanting to. We can only marvel at why Shepard would even consider placing these folks on stage, and why a company would ask their patrons to watch them act out their ugly, confusing lives. It's a freak show that leaves us feeling dirty and angry that we have been asked to subject ourselves to the experience.

There is much to appreciate in Shepard's piece, although the play itself is sometimes irrational and unclear and characters' behavior doesn't seem to make sense. And there are some admirable performances, especially from Davies. But for a production to bring us a real sense of what Shepard is getting at, it needs to show an understanding of and a sympathy for its themes and the ability to communicate them to us. Sadly, that is lacking.