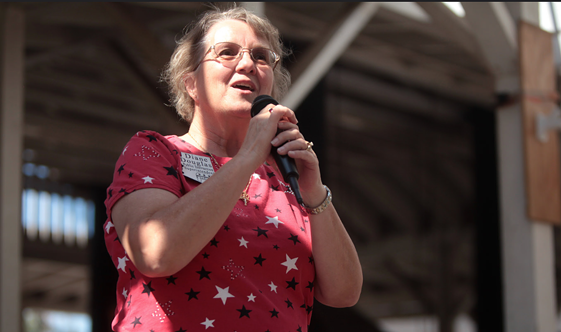 Courtesy of flickr.com
Diane Douglas, Superintendent of Public Instruction, had a 20 minute interview with reporter Derek Staahl Monday about the potential teacher walkout. The interview had a number of noteworthy moments, but the jaw dropper was when Douglas went beyond speaking out against the walkout and said public servants should not unionize.

Douglas said during the interview that she doesn't like the idea of a walkout, insisting she's only thinking of the children.


"Stay on the job. Stay in your positions. Show up for work on Thursday. Continue your negotiations with the governor and the legislature. . . . I think there are solutions to this problem, but hurting our families and our children are not one of them."

Douglas wants to call it a strike, not a walkout, because that allows her to add, "In Arizona it is not legal for teachers to strike." Sounding like a third grade teacher addressing her unruly class, she said there might be consequences if the children — I mean, the teachers — don't behave. If they went out on strike, she wouldn't punish them herself, but the principal — scratch that, the State Board of Education — might take action, and you children — I mean, you teachers — wouldn't like that, would you?


"One of the ramifications could be decertification. . . . If they walk out, and I’m not advocating for one way or another, but if parents or citizens file a complaint at the department, we have an investigations unit, and I’ve ensured the board this morning, we will investigate anything that comes. . . . It may not be decertifying them. It may be a letter of censure within their file that goes on their record and is reported to the national database, and if they choose to leave and go teach somewhere else, it can be something that follows them. I would encourage cooler heads to prevail."

Then came Douglas' statement against public servants unionizing. I have a feeling she went a bit farther than she meant to here — I think she meant to say she was against strikes by government workers, not unions — but I'm fairly certain those were her true feelings coming out of her mouth, and it'll be pretty hard to call them back in again.


One thing I may have agreed with, with FDR, if he were alive today is, we share a similar view on public servants, that they shouldn’t unionize because they serve the taxpayers, they serve the citizens. We are their employers, and I don’t believe it’s right for them to strike against us.

At first I was surprised at Douglas' erudition. How did she know this obscure fact about Franklin Roosevelt which I hadn't heard before? However, a quick google search cleared things up. FDR's statement that he opposed collective bargaining and strikes by government employees is all over right wing websites. Scott Walker, the very conservative governor of Wisconsin, used it when he signed a bill cutting back on collective bargaining rights for teachers along with a number of other public employees.

Douglas didn't demonstrate the depth of her historical knowledge when she brought up FDR. She was simply trying to repeat one of those conservative talking points where a specific statement made by a progressive icon — FDR, JFK, MLK — is used against progressives. But Douglas got it wrong. It's true, FDR made a clear statement against collective bargaining and strikes by government employees, but he thought government workers had a right to form unions.

FDR's statement comes from a letter he wrote in 1937. He was invited to speak at the National Federation of Federal Employees convention. The NFFE is a union which has represented civil service federal employees since 1917. In the letter, FDR said he agreed with a resolution by the union against strikes by public employees. At the same time, he made it clear that the workers have a right to union representation.


"The desire of Government employees for fair and adequate pay, reasonable hours of work, safe and suitable working conditions, development of opportunities for advancement, facilities for fair and impartial consideration and review of grievances, and other objectives of a proper employee relations policy, is basically no different from that of employees in private industry. Organization on their part to present their views on such matters is both natural and logical."

There was no daylight between FDR and the NFFE. Unionization by government employees is fine, the president said. It is "both natural and logical." And he agreed with the union representing government workers that they should not strike.

Douglas owns her statement against government employee unions. It's all hers. President Roosevelt has nothing to do with it.

A final note: Douglas threw in the aside about FDR, "If he were alive today . . ." The fact is, he's not alive today. His statement is 81 years old, made at a time when the constitutionality of unions was being questioned, let alone how far they could go in support of their workers. FDR made a number of statements and took a number of actions which are at odds with stands taken by today's progressives. His position against strikes and collective bargaining by government workers is just one example. If Douglas is trying to shame the AEA, #RedforEd and their supporters into agreeing with her by leaning on an old FDR quote, sorry, it ain't gonna work.