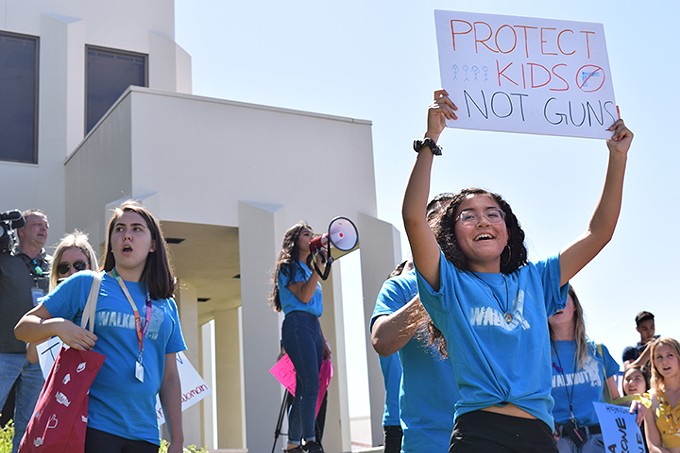 The national student-led movement to end gun violence is no longer only about school shootings. Student activists, more of whom turn 18 by the day, are calling for action by elected officials to address the role of firearms in issues like police brutality and violence against women and minorities.

Deja Foxx, a University High senior who just registered to vote, stood on the steps of Rep. Martha McSally's Tucson office with a megaphone. She told the crowd of her peers that this movement is about them. She said it's for people of color, members of the LGBTQ+ community, those who have suffered from mental illness and any "community member who just generally gives a fuck."

On the 19th anniversary of the Columbine massacre, Tucson students joined others nationwide in the National School Walkout, demanding gun reform and an end to gun violence. More than 150 students and allies left University High on Friday, April 20, and marched a mile to McSally's office.

With the teens were members from Moms Demand Action and Gun Violence Prevention Arizona, as well as state representative Randy Friese and Billy Kovacs, a Democratic candidate for McSally's seat.

Other Tucson schools marched in the National School Walkout protest. Students from both Tucson High Magnet School and City High marched to the Evo A. DeConcini U.S. Courthouse.

On the steps of McSally's office, 18-year-old Jahaziel Felix had a message for the lawmaker.

"We're tired of your neglective stance on gun control, and we are fed up with the amount of donations you take from the NRA," he said. "We want comprehensive gun reform, and we want a campus with safety and security.... In the 2018 election midterms, you'll be hearing from us on the ballot."

Sophia Greenhill, a 16-year-old University High student, just went to Washington D.C. with the Jewish Latino Teen Coalition. The teens met with lawmakers to talk about firearm legislation, including their opposition to a bill that would expand concealed-carry rights and their support of a bill that keeps firearms away from perpetrators of domestic violence.

They met with representatives from the offices of Sens. Jeff Flake and John McCain. Greenhill said the lawmakers were respectful although there were conflicting views. But she said McSally didn't respond to any of the group's numerous emails.

In a prepared statement, McSally's office said the congresswoman has worked hard to "bolster school safety, to improve our background check system, and to increase access to mental health."

In March, McSally cosponsored the STOP School Violence Act. With $175 million in funding for the next decade, the legislation provides support for training, technology and threat assessment to prepare for and prevent a school shooter.

But critics, including Gabby Giffords, the congresswoman who was shot in the head in 2011 while representing McSally's district, said some measures in this NRA-backed would have made it easier for a person with mental illness to get a firearm.

John Feinblatt, the president of Everytown for Gun Safety, said the bill was "masquerading as a background check bill but, if passed, it would actually weaken our country's gun laws and make it easier for people with dangerous mental illness to get ahold of guns."

Some of the mental health provisions from this bill were signed into law with other legislation aimed at mental health.

Roxanna Green was also on the lawmaker's steps. The mother of Christina-Taylor Green, the 9-year-old killed during the Tucson mass shooting in 2011, said she's proud of the students leading the current movement against gun violence, some of whom were friends with her daughter.

Christina-Taylor's death spurred Green into gun-reform activism, but she says the movement isn't about taking people's guns. In fact, Green is a gun owner since her family has a tradition of hunting for food. She said because of her activism, she used to getting called "liberal," but actually she's a moderate Democrat and her husband is a Republican.

"We believe in the Second Amendment," she said. "We just think we can make these small common-sense regulations."

Measures she would like to see are universal background checks, domestic abusers barred from owning a firearm, gun locks and for gun trafficking to be a federal crime.

Green's gun-reform activism is also driven by the desire to keep her son safe, who was only 11 years old when his sister was killed.

"We're not going to let fear win," Green said. "I will continue this until the day I die. But I hope it doesn't take that long."