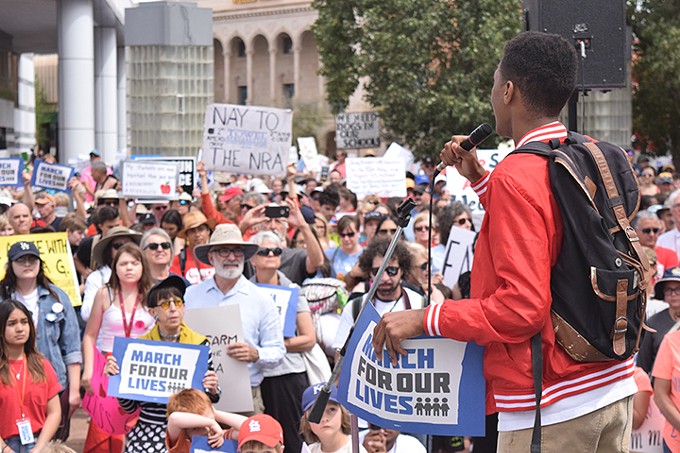 Danyelle Khmara
Student speakers talk about the effects of gun violence on their lives as March for Our Lives participants gather on Jacome Plaza, on March 24.

"I think this plan is thorough and comprehensive," Ducey said. "We needed to ask ourselves what we can do in law and practice to make sure these events don't happen."

While most of the calls for action come in the form of increased spending, such as an estimated additional $6 million in funding for mental health resources, the most detailed and wide-reaching aspect is the implementation of a Severe Threat Order of Protection (STOP) order.

A STOP order would allow police, family members, school administrators or mental health professionals to petition the court to prevent an individual from purchasing a weapon. The individual in question would have to pose a "significant threat" to themselves or others.

Anyone requesting a STOP order would need "clear and convincing evidence" that the suspect has a higher than 50 percent likelihood of a severe threat. Ducey's report did not indicate how this would be determined numerically.

In addition, if the subject of a STOP order currently possesses weapons, they must surrender their weapons within 24 hours of the issuance of the order, or law enforcement has the authority to confiscate them. However, Ducey stated this does not violate a citizen's rights under the Second Amendment because it ensures due process prior to an order going into effect.

Like all contentious issues, Ducey's plan has received both support and opposition from all sides:

"The Pima County Sheriff's Department is proud to support Governor Doug Ducey in Safe Arizona Schools, an action plan to enhance the safety of Arizona schools and communities." said Pima County Sheriff Mark D. Napier, who Ducey conferred with when creating this plan.

In addition to law enforcement, many educators themselves supported the plan. The Arizona PTA called the plan an "an excellent start to creating safer schools."

The Giffords organization, the political action committee established by former congresswoman Gabrielle Giffords and her husband, Mark Kelly, in the wake of the Sandy Hook shootings, released a statement saying, among other things, "The Governor's proposal currently provides a number of smaller fixes that will help improve Arizona's current systems, but lacks substantive policies that would help keep guns out of dangerous hands."

In response to his plan not including a ban on bump stocks, Ducey explained that "we wanted to focus on something best done on the state level, and bump stocks are best dealt with on the federal level," citing the Trump administration's recent moves to regulate them.

Arizona Sen. Steve Farley, who is among the Democrats who hope to challenge Ducey in November, welcomed the plans but felt they were not wide-reaching enough.

"I look forward to debate on the floor as we seek to improve his suggestions and create a bipartisan solution to start making our students and citizens safer from gun violence," Farley said. "These good ideas can only be truly effective if we close the gun show and private sale loopholes."

The ACLU of Arizona stated that "there is alarmingly little information and detail about the addition of [school resource officers] to our schools... Ducey states that Arizona students have the right to feel safe in their classrooms, but placing police in our schools won't achieve that."

In addition, the Phoenix branch of March for Our Lives posted "This is everything BUT 'aggressive' ... We commend [Gov. Ducey] for acknowledging mental health, but funding is not even close to enough."

View the complete details of Ducey's plan at azgovernor.gov.