Democrats Worried About Their Candidates; Happy To See Prop 200 Headed For Defeat 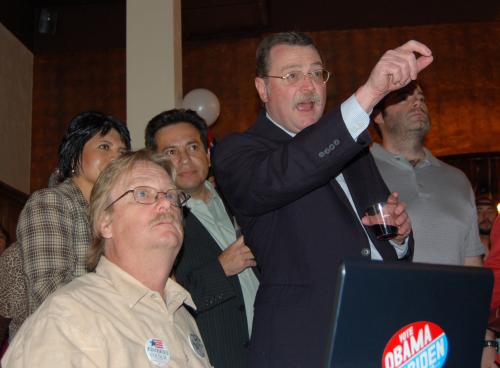 Democrats were cheering the big defeat of Prop 200, but that was one of the few brights spots as the first election results were released moments ago at Hotel Congress.

Pima County Chairman Jeff Rogers said that he expected that the close races would take days to resolve, as early ballots dropped off at the polls would probably be counted through Thursday or Friday.

He blamed the Democrats' poor showing on money spent by Republicans on negative campaigning.

"They spent so much," Rogers said. "I thought it might get close."

Rogers cheered the defeat of Prop 200, saying that Democrats could afford to lose a seat or two, but couldn't afford to have the city's budget permanently crippled by an unfunded mandate. The Public Safety First initiative was losing by a 2-1 margin.

That thought was echoed by Brandon Patrick, the chairman of Don't Handcuff Tucson, a political committee that opposed Prop 200.

"We were pleasantly surprised by the results," Patrick said. "We were confident we were going to take down Prop 200, but I'm not sure that any of us predicted the results would be that favorable. It feels great to have defeated the biggest unfunded mandate in Tucson history."

Democrat Richard Fimbres had a comfortable lead over Republican Shaun McClusky in the race to replace the retiring Steve Leal.