From Washington to Arizona, undocumented youth wonder what’s next as Congress again drops the ball on immigration reform 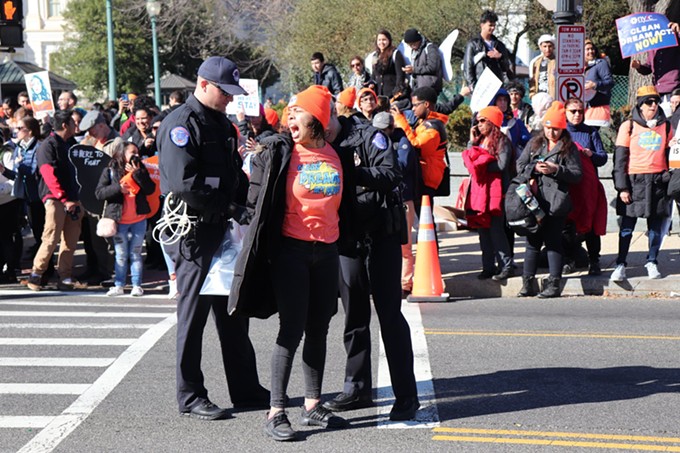 Marissa Ryan
DACA recipients and allies get arrested while chaining themselves together, blocking traffic by the Capitol in D.C., protesting the March 25 DACA deadline, with no legislative fix in sight.

On March 5, several dozen people chained themselves together in the street, blocking traffic near the U. S. Capitol, in Washington D.C.

Supporters watched on while chanting "We see you. We love you," as Capitol police pulled the throng apart, one by one. The protesters didn't resist as police patted them down, emptied their pockets and zip-tied their hands behind their backs. Some were silent, stoic, while others chanted to the onlooking crowd: "No justice, no peace."

Police arrested 68 people, according to CNN, at Independence and New Jersey avenues. They were loaded into opaque-windowed vans and carted away, charged with "crowding, obstructing or incommoding." A couple blocks away, 19 others were arrested in front of House Speaker Paul Ryan's office.

The deadline Trump created when he ended DACA last September came and went with little acknowledgement from Congress. In D.C. and around the country, recipients of Deferred Action for Childhood Arrivals and their allies marched, protested, chanted and were arrested.

In Tucson, they danced.

Scholarship A-Z, an advocacy group for the rights of young immigrants, held a dance in solidarity—for DACA recipients and the entire undocumented community, whose trauma and level of fear has only ramped up under the Trump administration.

"The whole purpose of March 5, of the dance, was to create community," says Darío Andrade Mendoza, a DACA recipient and Scholarship A-Z member. "We didn't let ourselves down, and we're not going to get caught up in the failure of others.... We're going to create community and dance a little."

Andrade Mendoza was part of a group of DACA recipients who spent several weeks in D.C. last year, waiting in the halls of the Capitol building to tell their stories to those with the direct power to make a difference.

"Congress failed us," he says.

The main legislation DACA proponents were advocating for was the Dream Act 2017. The bipartisan bill would have allowed a path to citizenship for close to 2 million Dreamers, without being attached to heightened border enforcement.

Andrade Mendoza says he knew back in January, when the Democrats gave up their leverage—closing the government by withholding votes on a spending bill, supposedly, until a DACA fix was addressed—that nothing would happen before the March 5 deadline.

But Andrade Mendoza and hundreds of thousands like him still have the ability to renew DACA, which gives recipients the legality to work and live in the U.S., because of two federal court rulings that the Trump administration can't end DACA without going through legal proceedings. Legal experts say this process could take a few months or a year.

Regardless, ACLU attorney Billy Peard says it's unlikely Congress will find a legislative fix until after the midterms elections. And depending on whether Democrats take back the House, what that fix will look like is anybody's guess. If Trump has his way, a path to citizenship for a segment of Dreamers will come at the cost of massive cuts to legal immigration, an expanded border wall and heightened border security.

Peard says if the two cases, one out of California and the other New York, make it to the Supreme Court, they're likely to rule in favor of the administration, given the conservative makeup of the court. Peard says the question is not whether the president has the authority to end DACA.

"The question is how he does it," he says. "He needs to go back to square one and reinitiate the proper procedures to go about revoking it an orderly fashion."

Unsurprisingly, the path Trump chose caused traumatic uncertainty in the lives of 800,000 Dreamers, chaos in Congress and a government shutdown.

In the meantime, Scholarship A-Z is working to help DACA recipients who can't afford the renewal cost of almost $500. They are also working to change stereotypes surrounding immigrant communities, Andrade Mendoza says.

"Although we are folks who have suffered, we're also people who are much more than our tragedy," he says. "We're going to keep advocating and sharing our stories and being the warriors that everyone who's undocumented really is."