Trouble Bruin: Arizona Smacked Down by UCLA, 82-74, at McKale Center 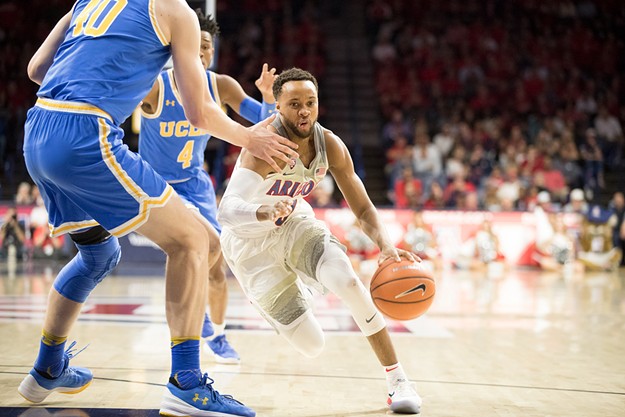 Monica Milberg | Arizona Athletics
Senior Parker Jackson-Cartwright had 10 points and four assists in Arizona's 82-74 loss to the Bruins of UCLA on Thursday.

Jaylen Hands sealed Arizona’s fate late in the first half of Thursday’s tilt between the mighty Bruins and the 13th-ranked Wildcats.

Hands, who entered Thursday’s game averaging 11.1 points per game for the Bruins, went on an unbelievable one-man scoring barrage in the half’s final minute.

The San Diego native nailed consecutive three-pointers, buoying what was a two-point UCLA, before hitting his magnum opus in the waning seconds of the half.

The shot, which figuratively ripped the Wildcats’ hearts out in front of 14,644 fanatics, was a step-back, off-balance heave from 25-feet away.

An outstretched Parker Jackson-Cartwright tried, in vain, to stop Hands’ shot—stretching his 5-foot-11-inch frame to distract the lanky freshman.

Things would only get worse for the Wildcats in the latter half, surrendering 14 field goals and five threes to the visiting Bruins, sealing an eight-point loss—the first suffered by Arizona inside the hallowed McKale Center this season.

“And you know that cushion at the break, 44-34, you know, to me, we struggled,” Miller said. “We didn't have our confidence from that point on. We're really playing catch up. But UCLA's offense was too good for our defense.”

Miller’s comments on the team’s worrisome defensive play stand out, given his team’s year-long struggle on that side of the ball.

The Wildcats, entering Friday, ranked 111th in defensive efficiency by KenPom.com—ninth-best among Pac-12 squads. Only UCLA (120), Cal (189) and Washington State (244) are worse in that metric.

Miller struggled to sum up an exact reason for his team’s defensive woes, saying he’s tried everything he can, both in practice and in games.

The Wildcats gave up 80-plus points for the eighth time this season, going 4-4 in those contests. They’ve now lost back-to-back home games against the Bruins, having lost last year’s clash 77-72 in Tucson.

Senior forward Dusan Ristic, who scored 11 points on Thursday, struggled to pinpoint the exact culprit for the team’s defensive struggles.

“You can't just blame one person. The whole team; it's a completely collective defense,” Ristic said. “We have to just play more aggressive as a team.”

Miller sarcastically expressed disbelief that this year’s team is tied for first place, at 9-3 in conference play, with USC—who they’ll face at 8:15 p.m. on Saturday.

“It doesn't feel that way because we're really going down a different path with our effort and our defense,” Miller said. “And you could sense that tonight. You know, that was probably the easiest victory in McHale, go back about seven, eight years, you know.”

The senior from Nova Sad, Serbia—when asked where the team goes from here—had a very prophetic answer.

“Even today ... we didn't enjoy the game. We were worried about to trying not to lose instead of just trying to win, and that's the difference maker, I think,” Ristic said. “Everybody needs to understand that this is just a game, and you have to have fun playing it.”