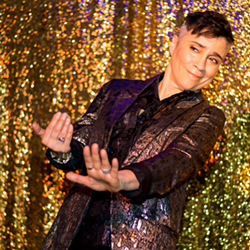 “I grew up thinking I'm an artist because I didn't know any other way,” says actor, stand-up comedian and writer Marga Gomez. “My parents were both creative. All their friends were performing artists, so I was very comfortable in this world.”

Her mid-century upbringing, although periodically rocky, surrounded Gomez with humor and filled her with drive. Her mother was a professional dancer; her father was a comedian and songwriter, and a producer of popular, Follies-scale variety shows for New York’s large community of Spanish-speaking immigrants. The hustle to stay on top of the entertainment business defined her family.

Between them, her parents have inspired half Gomez’ output of a dozen popular solo stage shows. The latest is Latin Standards, her tale of the father-daughter entertainer dynamic. Its title refers to the genre of her father’s music; “The comedy is a survival tool,” Gomez says. The New York Times named the show a Critic’s pick when it opened last year at The Public Theatre (Hamilton).

Borderlands Theatre presents Gomez performing Latin Standards February 14 through 18 at the Steinfeld Warehouse, 101 West 6th Street. The run opens with a Valentine’s day fiesta, including live music and food. Details and reservations are available at tinyurl.com/LatinStandards.
“I started writing solo shows because my parents were important but forgotten,” Gomez says. “I wanted the Latino community to know about these people and their times.

“At the end of the show, the great thing that people tell me is, even though I'm a Latina, I'm a lesbian, I'm from New York and I'm neurotic, people can totally relate to the father-daughter story, and they see their own father.”

Also on Valentine’s day, comedy siren Lisa Landry headlines a show at Laff’s where every woman will get a rose. Visit laffstucson.org for details.