Hostiles is a brutal and spellbinding Western 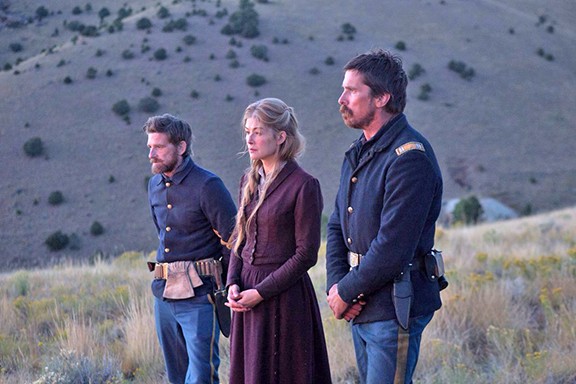 Courtesy
Once upon a time in the west.

Christian Bale turns in another spellbinder as Capt. Joseph J. Blocker. Joe, a quiet, tired, jaded soldier, is spending the closing days of his military career in 1892 capturing and imprisoning Native Americans. He has fought many battles, seen many atrocities and committed many of his own.

When aging and terminally ill Cheyenne Chief Yellow Hawk (Wes Studi) is granted freedom by the President of the United States, somebody who knows his dialect must be chosen to escort him and his family back to Montana. Joe is the best candidate for the job, but it's a job he doesn't want.

Joe fought against Yellow Hawk and witnessed him murdering his friend many years ago. The idea of leading a man he sees as the worst of murderers to a graceful death in Montana doesn't appeal to him, and in as tense a scene as any filmed last year, he says so to his Colonel (Stephen Lang) and a stuffy bureaucrat (Bill Camp, who occupies one of the few characters in the film that qualifies as cartoonish). It's in this scene that Bale establishes that Joe is going to rank among his best performances. And the movie has barely begun.

Actually, Cooper establishes the unrelenting darkness of this project before the title credit. Rosalie (Rosamund Pike) is seen teaching her young children what adverbs are as her husband tends to their farm. In an instant, Rosalie's family life is decimated by an attack by Comanche bandits, who kill her husband and all of her children.

Joe, having no real career choice but to lead Yellow Hawk to his homeland (his Colonel threatens his pension), has reluctantly set out on the journey with the dying elder, his family (which includes the terrific Adam Beach and Q'orianka Kilcher) and a handful of soldiers. He stumbles upon a destroyed Rosalie and her dead family at their burned-out homestead. He takes her into their traveling party, a gesture that starts to awaken a possibly decent human being within himself.

Cooper, who also wrote the screenplay, avoids sermonizing, and opts for a film that takes its sweet time delivering its message. The movie is far from predictable, and nobody in the cast is safe. That cast includes soldiers played by Timothee Chalamet (Call Me By Your Name and Lady Bird), Jesse Plemons (Breaking Bad) and impressive, relative unknown Jonathan Majors. Rory Cochrane (Dazed and Confused) is a true standout as a longtime fellow soldier of Joe's battling "the melancholia."

Adding to what really amounts to one of 2017's greatest, and most underrated, acting ensembles would be Ben Foster, who shows up late in the film as Charles, an imprisoned soldier handed off to Joe mid-journey. It's Joe's job to lead the murderous Charles to the gallows and, in an undeniable way, Charles represents the horrors of Joe's past ways. It's no surprise that this results in more than one tensely acted scene between Foster and Bale.

Pike, who hasn't been around much since her bravura performance in Gone Girl, provides devastating grace and beauty as the mother who loses everything. She makes Rosalie a true symbol of human resilience during harrowing times. Studi is pure brilliance as Yellow Hawk, saying everything with his majestic, chiseled face. He has a moment with Bale near film's end that is heartbreaking and beautiful.

How Max Richter's haunting soundtrack failed to garner an Oscar nomination is beyond me. Also delivering top notch work would be cinematographer Masanobu Takayanagi, who has lensed one of 2017's better looking films.

Bale deserved an Oscar nomination for his work in this film. Joe is the sort of complicated, wounded character Bale excels at, and Bale's partnership with Cooper (this is their second film together after Out of the Furnace) continues to be one of cinema's more compelling ones.

While Hostiles is far from a fun time at the movies, it's an essential one for those who like their history served with a fair share of truth and tragedy.