TMA delivers an imaginative show of clothing in art 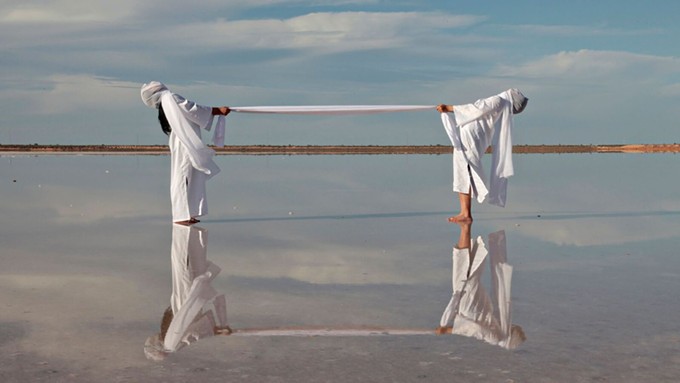 Courtesy of the artist and Ayyam Gallery, Beirut, Lebanon, and Dubai, UAE
“Wasl (Union),” by Sama Alshaibi, from the project “Silsila,” 2017, video, 9:27 minutes.

All of them are readily identified by their clothing: the white gown, the 10-gallon hat, the habit, the uniform. As Dr. Julie Sasse, curator of the fascinating show Dress Matters: Clothing as Metaphor at the Tucson Museum of Art, argues, "clothing is a powerful signifier of who we are."

Sasse gathered 51 artworks that examine every possible meaning and use of clothing. The artists consider everything from military and religious uniforms to sexualized garments that announce gender or blur it. They ponder ghostly christening gowns that evoke the dead and put torturous pins in a pioneer woman's bonnet.

And they've used a wide range of media, including traditional oil paint and video, found garments and handmade paper dresses. A silkscreen by Andy Warhol transforms Ingrid Bergman into a veiled nun with just a few deft strokes. Robyn Stoutenburg McDaniels's hazy photos of unlikely brides are pinned inside a faux wedding album in metal.

Jay Dusard's cowpokes slouch across giant black-and-white inkjet prints. And Fausto Fernandez's troupe of fearsome soldiers, stretching almost life-sized across a wall, are collaged and painted, their images drawn from century-old photos of the General Pershing invasion of Mexico.

Most of the works are contemporary, but at least one dates back to the 18th century. This old work, a delightful court painting, c. 1790, by German artist Johann Georg Edlinger, presages many of the show's themes. It meticulously records the elaborate costumes of ladies of a royal court. Their embroidered dresses of silk and lace, tightly cinched at the waist, would have required hundreds of hours of eye-straining labor by seamstresses of decidedly lower rank. Then as now among the ruling class, the noblewomen's garments signal not only their high status and power, but their wealth.

Going forward a couple of centuries, American artist Willie Birch addresses class differences more directly. Birch's painted papier-mâché piece "The Worker and the Boss," 1992, mirrors the divide. It consists of two men's work garments hanging separately on the wall. The boss's get-up is a suit jacket, the worker's a rough khaki shirt; the suit is labeled "overpaid" and the worker's "overworked."

But the work is playful too, with a folkloric bent: The two tops sport 3D pictures and words that act as an imagined dialogue between the two men.

"I feel sick," the worker's shirt says. The disbelieving boss's suit tosses back with "Sick? Drunk!!!"

Quite a few of the artists also tackle another issue silently raised by the old German painting. The court ladies' dangerously cinched waists, bound by corsets, led to fainting spells, but they were de rigueur advertisements of the female wearers' sexuality and beauty.

Maureen Connor does a wonderful update on the persistent idea that women must be rail-thin. Her 1990 "Thinner Than You," a steel-and-nylon sculptural rendition of a sexy black slip, is cut so painfully narrow that it would stop a woman who wears it from breathing at all.

Laura Schiff Bean's "Unfinished Conversations," 2017, a gorgeously painted mixed-media acrylic, pictures a glistening white prom dress. But there's no woman inside: The dress stands alone, bereft of its living dancer. What's more, in between its folds are the painted wounds accumulated during the course of a woman's life. The dress becomes a metaphor for life's passage, from giddy youth to somber old age.

Empty clothes can also conjure up the dead. Adam Fuss's "My Ghost," 1999, is a haunting black-and-white photogram of a Victorian-era baptismal gown, a memento mori for any and all humans who've come before us.

Angela Ellsworth ponders the suffering and grit of her Mormon forebears in "Seer Bonnet XIX (Flora Ann)," 2011. Her pioneer bonnet nominally resembles those that Mormon wives (plural) once wore, but Ellsworth has crafted it in steel and lined it with thousands of sharp pins that prick the skin.

Two empty-dress works pay homage to women who were literary pioneers. A white dress at the center of an installation by UA professor Barbara Penn evokes poet Emily Dickinson, a writer who fiercely engaged life while staying at home, dressed in white. Susan Jamison made a spectral "Drowning Dress" that mourns Virginia Woolf's suicide by drowning.

Even the Virgin Mary appears—or rather doesn't appear—in "Hail Holy Queen," another empty-dress painting, this one by Tucson's Simon Donovan. The background mimics religious paintings of old: Donovan used shiny gold to paint the words to the "Salve Regina," an old Latin hymn to Mary, on a field of celestial blue. But by portraying Mary headless and armless, like a broken statue, he highlights her loss of power in the modern world.

Christian Boltanski has piled up stacks of modern-day T-shirts below a photo shrine of Holocaust victims, their long-ago blurry faces lit by lights that obscure them. The work was originally created in 1989, but the use of the contemporary shirts adds a poignant new meaning. The homage to those who perished under Hitler now also seems to embrace today's international refugees, the Africans who drown in the Mediterranean and the Central Americans who die in America's southwest deserts.

Sama Alshaibi, a UA photography professor born to a Palestinian mother and an Iraqi father, exhibits a nine-minute video that alludes to some of the most contested clothing in the world today: the veils, robes and burkinis worn by some Muslim women.

The clothes are a highly charged political issue in France, where armed police forced Muslim women in modest bathing suits to strip on a Riviera beach in 2016, and in the U.S., where women have been taunted for wearing the hijab.

In her wide-ranging video, "Wasl (Union)," Alshaibi doesn't address the clothing conflicts directly. Traveling from the Middle East to North Africa, to the Maldives and Hawaii, Alshaibi not only looks at the place of women, she documents the ecological disasters of drought and rising sea levels—and the climate refugees who will flee them.

Alshabi's video has many shots of women, both in not-traditional and traditional Muslim dress. In these ravishing color images, women in flowing white garments and veils step boldly into the vivid blue waters of the world's seas.