Dreamers continue to fight for their rights 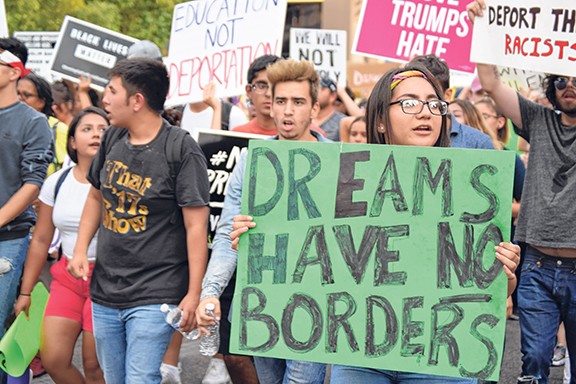 The fate of Dreamers is uncertain, prone to the whims of a president whose policy demands change faster than his staff. And despite the stress and trauma that accompanies not knowing if their daily lives will be turned upside down, Dreamers continue to rally, knock on lawmakers' doors and tell their stories.

Lucero, a member of Scholarship A-Z, an organization that secures access to higher education and equal rights for young immigrants, spent two-and-a-half weeks in the halls of Congress, telling politicians his story.

The morning after Thanksgiving, Lucero and about 20 other people loaded into two vans at 3 a.m. and drove 48 hours to Washington D.C. Many of them were Dreamers—the swath of American-grown youth brought into the U.S. as children without the legal status.

The group used the "bird-dog" approach—waiting for Congress members to come out of voting, to express the importance of DACA. Often times, Republicans were the ones who stopped to listen to Lucero's story while both Democratic and Republican members of Congress ignored him by getting on their phones.

"It's really heartbreaking to open your heart to someone and have them shut you down," Lucero said.

He's been in the U.S. since he was 2, and he just turned 19. He was never able to get DACA because of a technicality. Among other things, in order to qualify, Dreamers had to prove they'd been in the U.S. continuously since June 15, 2007. Although Lucero was, he lacked the documentation to prove it.

He remains confident some Dreamer legislation will pass but doubts it will be a "clean Dream Act," meaning free of other immigration enforcement measures. Many Democrats and even the errant Republican have expressed the need for a clean Dream Act.

Trump has been all over the place on immigration policy and whether Dreamer legislation needs to be tied to enhanced border security. Less than two weeks after tweeting "...there can be no DACA without the desperately needed WALL at the Southern Border..." he seemed to agree with Sen. Dianne Feinstein that Congress should handle a DACA fix first then move on to immigration reform, in a televised bipartisan meeting on immigration.

In the kerfuffle of Trump's latest policy pledges, he's both demanded $18 billion for a wall (apparently Mexico is not paying for that after all but the American taxpayer) and said he'll sign any immigration agreement Congress gives him.

Last month, Arizona Sen. Jeff Flake justified his yes vote on the tax bill by tweeting he had secured a commitment from the administration and senate leadership to "enact fair and permanent protections for DACA recipients."

He's said a clean Dream Act is not possible—to get 60 votes in the Senate, there has to be "some border security elements" attached to relief for Dreamers, but there's debate on what type of security elements.

"Those of us who live in a border state understand that you can't have a 2,000-mile wall across the southern border," Flake said in a recording he shared with press on Jan. 10. "There are mountains and rivers that prevent it in some places; in some places you just don't need it."

And in some places, a wall is downright disastrous. Habitats get fragmented, and during monsoon season the wall becomes a damn, intensifying flooding, says Dan Millis, spokesperson for the Sierra Club Grand Canyon Chapter Borderlands Program.

This was demonstrated in the summer of 2008 when a 15-foot-high, 5.2-mile border fence blocked the natural flow of floodwater during a storm. News reports showed debris piled up against the fence as water rose two to seven feet high, flooding the border towns of Lukeville, Arizona, and Sonoyta, Sonora. The rushing water eventually toppled the multi-million-dollar fence.

"Pretty much nothing gets through except for people," Millis said about border walls. "Spending money so we can cause problems to spend more money is absolutely ridiculous."

Antony Sedgwick owns Carmencita Ranch on the Arizona-Mexico border. The current rendition of a wall runs through his property along with fencing through his slice of the Santa Cruz River.

And when the wall went in, Sedgwick said Homeland Security didn't ask permission, they just did it. And sometimes flash floods washed them down—trial and error with taxpayer money, he said. And even after the wall was put up, his ranch hands still saw people crossing, families mostly, though that's rare these days.

The wall had its benefits. It kept bulls being raised on neighboring farms in Mexico from crossing onto his property. They used to contaminate his herd, and he says, since the wall, the grass really is greener on his side.

"Now we have this billion-dollar fence that helps keep their cows out," he said. "Other than that, the border policies have hurt our economy and restricted our freedom."

After the Trump administration announced it wanted $18 billion from Congress for a renewed and expanded border wall, U.S. Rep. Raúl Grijalva (R-AZ03) said in a prepared statement that Trump's "fixation on a 'big, beautiful wall'... is a complete detachment from reality."

"The U.S.-Mexico border region already boasts more than 650-plus miles of physical barriers, thousands of Border Patrol agents and billions in 'border security measures,'" he wrote. "The vast majority of the 12 million people who call the borderlands home are vehemently opposed to building even more barriers, especially when a historically low number of individuals are attempting to cross them."

So much about the Dreamer narrative is, in itself, racist, Lucero says. "We have to prove ourselves in order to seem valid."

In order to be eligible for DACA, recipients had to have a near-spotless criminal background, as well as show their continued residence through employment or education. And much of the Dreamer legislation being talked about stipulates eligible Dreamers be students, gainfully employed or in the military—no allowances to this group of youth to take a break, to explore or to make mistakes.

Dreamers are not allowed to be mediocre, said Zaira Livier, an immigrant-rights activist and member of Lucha Unida de Padres y Estudiantes.

DACA recipients "have to be valedictorians for us to accept them," she said.

And valedictorians or no, it's devastating for people, not knowing what their future holds—their jobs, their homes, their families, she said.

"The fact that their entire livelihood rests in the hands of people they don't even know, and they have no control," she said. "But they continue to be DACAmented and unafraid."

And as the DACA deadline approaches, people of power are attempting to make strides at a fix. Flake continues to work with a bipartisan group of lawmakers to find a legislative compromise, even after Trump's now-infamous comments about letting too many people in from "shithole" countries. Last week, he suffered a setback, however, as Republican leadership backed away from the bipartisan agreement Flake had been working on after Trump panned it.

The plot thickened further last week when a federal judge temporarily blocked the Trump's decision to end DACA, allowing recipients to renew their protected status. A September poll done by ABC found that 86 percent of Americans support residency for Dreamers. And a Politico poll found 58 percent of voters think Dreamers should have a path to citizenship, mirroring others with similar findings.

And that may be part of what gives local Dreamer Jesus Lucero hope.

"We are the embodiment of the American dream," he said. "Us migrants aren't here to take away from the economy. We're here to add to it."