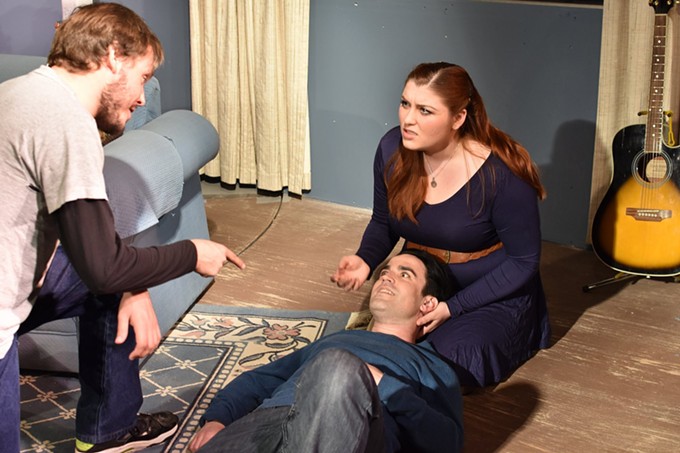 Right out of the new year's gate, a couple of theaters have gotten down to business.

At Live Theatre Workshop, the joint was jumping opening night for John Guare's House of Blue Leaves. A modern piece in which Guare glances a penetrating eye toward the mid-century mayhem of an unpopular war, the obsession with celebrity, overmedication with lovely new drugs that squelch emotions, war-ruined young men who want fame by destruction and the first "modern" pope, Pope Paul VI, coming to the U.N. to urge peace.

Guare's piece is funny and darkly disturbing, and it poses numerous challenges to pull its many pieces together. Fortunately, director Roberto Guajardo has been both thoughtful and a bit wild in his efforts to corral a big cast and big ideas.

Artie Shaughnessy (Keith Wick) is a middle-aged (I mistakenly typed muddle-aged, but that's pretty right-on too) zookeeper who writes songs so good he knows he is destined for fame and fortune. He is married to Bananas (Avis Judd), who is pretty much what the name implies. He has hooked up with his downstairs neighbor, who occupies just a few notches above bimbo designation, Bunny (Shanna Brock, without a single false note), who urges him to follow his dream to Hollywood; she is convinced he will succeed, especially if his sheet music is blessed by His Holiness. But what is Artie to do with Bananas? Ronnie (Taylor Rascher), who drops in unannounced, is the AWOL son with a home-made bomb; he clearly takes after his mother in the wacko department, but in a much scarier way.

Into this already crowded pre-apocalyptic day, comes Corinna (Janet Roby), current girlfriend of famous film director, and Artie's friend, Billy Einhorn (Bob Kovitz), who has sent her instead of himself in response to Artie's plea for his career-building help. And then through the window come three nuns seeking sight of the Pope, but who have been locked out of the building and are captive, freezing, on the roof. Then, throw in an MP and someone with a straitjacket and you get possibilities of great story-telling both substantive and laugh-inducing. Popes, freezing weather in October and bomb detonations—what hath Guare wrought?

In shows like this there is much room for interpreting characters and tone, and Guajardo and his cast have found a powerful combination of sensibilities. One choice I didn't think worked so well is the character of Bananas, whose manner here reads more like mental retardation than a tightly tamped down but disquieting presence, struggling against the sedating pills. She's seems more an inconvenience than a serious threat to Artie's pursuit of his dreams. Judd does well what she and Guajardo have agreed on, but I think it would be more powerful if she played against "crazy."

Guare really outdoes himself with his closing scenes in which Artie, in the middle of all the madness, is called into the zoo for much needed assistance. All of the pregnant animals have decided to give birth simultaneously. It's a powerful intrusion of the natural world in both its chaos and order and an echo of the laboring we have witnessed as these characters struggle to negotiate a mad, dangerous world.

This production is rich and funny and disquieting. There are a few details that are missed, like some of the costumes not looking like mid-'60s fashion, and a rather clunky theatrical effect toward the end. But the fun and the heft situates the show powerfully as one not to be missed.

Across town, A Delicate Ship is being floated by Something Something Theatre, a still young theater, and one still searching for consistent quality in their productions.

The dense but brief play is by Anna Ziegler, who wrote Something's 2017 production of Ali and Dove. Ziegler has been hailed as a strong contributor to contemporary dramatic work, and we can see from this show why that is. The script is concocted in a poetic, sometimes lyrical way, although it has at its center a rather mundane story of two guys after the same girl. However, the show spews not only the unsavory behavior of the jealous, but a fountain of almost poetic musings about philosophy, memory, time, love and loss.

It's Christmas Eve and Sarah (Shira Elena Maas) and boyfriend Sam (Stephen Dunham) are enjoying companionship in a sweet sort of way, when there's a knock at the door. The visitor is unexpected and, it is soon revealed, unwelcome. It's Sarah's childhood friend, Nate (Nick Watts). Now in their 30s, trying to make their way in the world, the two obviously have quite a history, which Sarah has never told Sam about. That's chiefly because she considers it history. But Nate doesn't seem to share her view. He is overbearing, cryptic, abrasive and we aren't sure what his intentions are, and he seems unsure himself. However, it becomes obvious that he does want something, but his supercharged presence doesn't ask for it in a non-threatening way and his abrasiveness certainly doesn't contribute to his chance of getting whatever it might be.

The evening stalls, although Nate insists that they be gay and festive, and the others play along. For a while.

At times the characters address us directly, a fairly common convention, although it's not a well-executed here. It often comes in odd moments, even sometimes when one is in the arms of another, one musing in our direction, the other in the play's moment. It's hard to make this sort of device happen smoothly, especially when those soliloquies are often poetic in their content and delivery. A kind of precision is required, and more from the actors might have helped both them and us.

There are a few other things that prevent this play from really sinking into the heart. Director Joan O'Dwyer has a cast of differing levels of skill and it is perhaps this that contributes to a ponderous, overly earnest pace. That, in turn, dampens or kills the lightness and comedy that is intended. And it is certainly intended and needed.

Ziegler's play is a big package, and this team isn't quite able to unpack it completely. Sometimes the scenes seem smeared instead of crisply building one upon the other. Although the theater's efforts are to be appreciated, their production of this play doesn't quite deliver the depths and discovery of all the playwright intended.