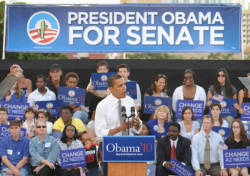 The Onion reports that Barack Obama is planning to run for McCain's Senate seat. An excerpt:

PHOENIX—Saying that it is time for change to come to Arizona, President Barack Obama on Tuesday formally announced that he will run for Senate against John McCain in the 2010 election.

Obama asks Arizona voters to send another message to Washington and John McCain.

Addressing a capacity crowd of nearly 72,000 at University of Phoenix Stadium, Obama stood before a giant banner emblazoned with his new "President Obama for Senate" logo—a basic facsimile of his 2008 campaign emblem with a cactus inscribed in the center—and called on voters to "turn the page and write the next chapter in the great Arizona story."

"I am, and always have been, motivated by a single, powerful idea: that I might one day play a small part in building a better Arizona," Obama said. "So I ask you today to join me in this quest. Our children, and our children's children, deserve it. Together, we can meet the challenges we face. Together, we can send a message to Washington, and together, we can beat John McCain."