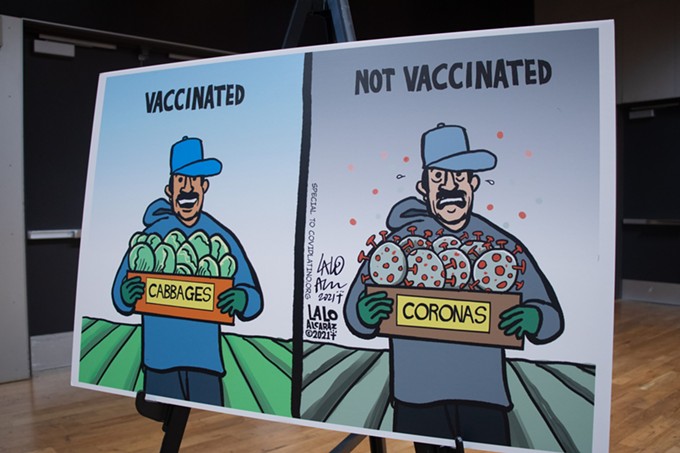 TEMPE – It all started over a bowl of “medicinal menudo,” a term political cartoonist Lalo Alcaraz coined as part of a running joke.

Several years ago, during a convention at Harvard University, social scientist Gilberto Lopez took Alcaraz to a spot that served the Mexican beef tripe soup. Thankful for the meal – and the dish’s reputed abilities to alleviate hangovers – Alcaraz told Lopez, “I owe you my life.”

The menudo forged a bond between Lopez and Alcaraz, who has consulted on popular TV shows and films and was a Pulitzer Prize finalist in 2020 and 2021. During the pandemic, Lopez invited Alcaraz to collaborate on a Hispanic-focused education campaign about COVID-19 prevention and vaccinations.

Lopez, an assistant professor at Arizona State University’s School of Transborder Studies, launched the COVID Latino project with the goal of using art and social media to disseminate information – and counter misinformation – about COVID-19 throughout the Southwest.

The effort brings together experts from Arizona and California’s Central Valley, home to many Hispanic farmworkers, and provides culturally relevant campaigns by way of the internet and social media.

The project so far has included animated public service announcements in Spanish and neighborhood murals to better connect with the hard-hit Latino population.

Lopez said the project stemmed from his frustration over the type of information being circulated in rural, Hispanic communities – “very technical, very jargony information.” Through the collaboration with artists, Lopez said, the resulting pieces are easier to share online and will help make the topic more digestible.

Claytoonz: Sticky By The Sea

WASHINGTON — Congressional Republicans on Thursday objected to a move by the Justice Department to investigate violent threats made against local school board members and teachers, arguing that the federal agency is “policing the speech of citizens and concerned parents.”

“Violence and true threats of violence should have no place in our civic discourse, but parents should absolutely be involved in public debates over what and how our public schools teach their children, even if those discussions get heated,” according to a letter led by Iowa Sen. Chuck Grassley, the top Republican on the U.S. Senate Judiciary Committee.

Attorney General Merrick Garland earlier this week directed the FBI to meet with local governments and law enforcement officials to probe increasingly frequent clashes at school board meetings over mask mandates and discussions of race in public schools. His action followed a Sept. 29 plea for help from the National School Boards Association to President Joe Biden, in which school meetings in Georgia, Florida, Michigan, Ohio, New Jersey, Virginia, Wisconsin, Tennessee and Nevada were cited.

“As these acts of malice, violence, and threats against public school officials have increased, the classification of these heinous actions could be the equivalent to a form of domestic terrorism and hate crimes,” the association said.

“As the threats grow and news of extremist hate organizations showing up at school board meetings is being reported, this is a critical time for a proactive approach to deal with this difficult issue,” the letter added.

But the GOP senators said that it was “entirely inappropriate” for the association to ask for a review of whether crimes are being committed under various statutes, including the PATRIOT Act, which is aimed at deterring terrorism.

“We urge you to make very clear to the American public that the Department of Justice will not interfere with the rights of parents to come before school boards and speak with educators about their concerns, whether regarding coronavirus-related measures, the teaching of critical race theory in schools, sexually explicit books in schools, or any other topic,” they wrote. The Pima County Board of Supervisors voted 3-2 on Tuesday against mask requirements for K-12 schools in Pima County.

Supervisor Matt Heinz presented the proposal for masks in schools in response to research from the Centers for Disease Control and Pima County.

Pima County recently co-authored a study with the CDC that found K-12 schools without mask requirements in Pima and Maricopa counties were 3.5 times more likely to have a COVID outbreak than schools with mask mandates.

“In light of the information that literally came from this county and Maricopa County in Arizona and the CDC,” Heinz said, “I think it makes a lot of sense for us to take a look at this again.”

Heinz reiterated his view that masks protect students and teachers from COVID and that data supported his opinion.

Dr. Francisco Garcia, Pima County's chief medical officer, was asked to discuss the potential mandate with all 12 school district superintendents in Pima County. He presented their feedback during the board's regular meeting.

WASHINGTON – Robocalls to Arizonans dropped by more than 3 million in July, to about 84.4 million for the month, as the first phase of a new federal mandate took effect that requires phone companies to implement anti-robocall measures.

But consumer advocates say phone carriers could be doing more.

A report last month by the U.S. Public Interest Research Group Education Fund found that just 16 of the 49 largest phone companies in the country had fully implemented the STIR/SHAKEN technology by a Sept. 28 deadline, and another 18 had partially implemented it.

In Arizona, of the 18 that reported to the Federal Communications Commission, seven said they had completely integrated the system and 11 had partially done so. Another provider in the state had not reported to the FCC by Sept. 28, USPIRG said.

The FCC regulation gave the five largest carriers a June 30 deadline to install the STIR (Secure Telephone Identity Revisited)/SHAKEN (Signature-based Handling of Asserted Information Using toKENs) system, which lets providers authenticate caller ID in an attempt to reduce spoofed robocalls. Smaller carriers were given until Sept. 28 to report their progress on the new program.

The FCC did not respond to calls on the progress of the providers. But Diane Brown, executive director of ArizonaPIRG Education Fund, said the companies are falling short.

“Our research documented that over half of the companies that reported their status to the Federal Communications Commission were not using the industry standards, but instead were using their own methods to manage robocalls,” Brown said.

“Companies should always use the highest standard to protect consumers,” which Brown said is STIR/SHAKEN.

That was echoed by YouMail CEO Alex Quilici.

“It’s definitely not enough for these guys to create their own plan,” said Quilici, whose company tracks spam and robocalls. DACA leaders confronted Kyrsten Sinema on flight, at ASU to ask for her support: They got silence 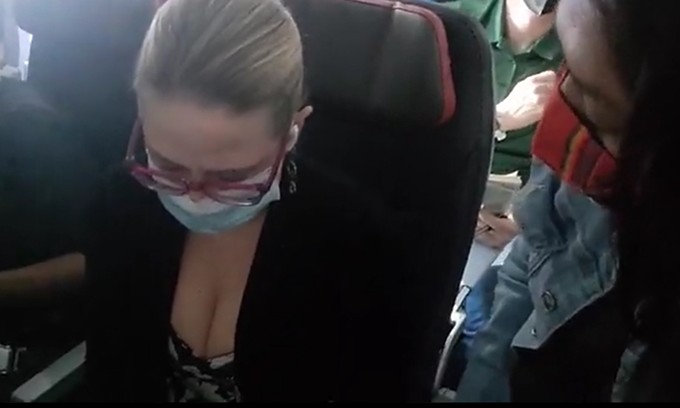 Sen. Kyrsten Sinema of Arizona ignored Karina Ruiz, a local leader who advocates for immigrant communities, when the activist approached her on a flight to Washington, D.C., Monday to urge the senator to commit to passing a pathway to citizenship for millions of undocumented immigrants.

In a video she posted on social media, Ruiz walked down the airplane aisle and stopped next to Sinema, who was sitting in an aisle seat with a laptop in front of her and wireless earbuds in her ears.

“I’m being vulnerable right now to you. My dad passed away last year, and he didn’t get to reunite with my family. I don’t want to disturb you, but at the same time, I want to see if I can get a commitment from you, Senator,” Ruiz said.

“This is my life and the life of millions,” Ruiz continued. “I’d just like to hear from you. Can we get a commitment from you to get a pathway to citizenship for millions like me?”

“All right, Senator, you don’t want to respond. Thank you for your time,” Ruiz said, and walked away.

You can do more than be sorry for my loss, you can deliver us citizenship. I don't recognize you @SenatorSinema you organized marches against SB1070, and now that we need you remain silent & ignored me, unacceptable. pic.twitter.com/wyYGVw0WG3

For years, Ruiz has pushed for different versions of federal legislation that would give thousands of immigrants like her, who arrived in the country at a young age, and her family a pathway to citizenship. Locally, as a leader of the Arizona Dream Act Coalition, Ruiz has worked to reform state laws that prevent undocumented students from accessing in-state tuition.