WASHINGTON – Robocalls to Arizonans dropped by more than 3 million in July, to about 84.4 million for the month, as the first phase of a new federal mandate took effect that requires phone companies to implement anti-robocall measures.

But consumer advocates say phone carriers could be doing more.

A report last month by the U.S. Public Interest Research Group Education Fund found that just 16 of the 49 largest phone companies in the country had fully implemented the STIR/SHAKEN technology by a Sept. 28 deadline, and another 18 had partially implemented it.

In Arizona, of the 18 that reported to the Federal Communications Commission, seven said they had completely integrated the system and 11 had partially done so. Another provider in the state had not reported to the FCC by Sept. 28, USPIRG said.

The FCC regulation gave the five largest carriers a June 30 deadline to install the STIR (Secure Telephone Identity Revisited)/SHAKEN (Signature-based Handling of Asserted Information Using toKENs) system, which lets providers authenticate caller ID in an attempt to reduce spoofed robocalls. Smaller carriers were given until Sept. 28 to report their progress on the new program.

The FCC did not respond to calls on the progress of the providers. But Diane Brown, executive director of ArizonaPIRG Education Fund, said the companies are falling short.

“Our research documented that over half of the companies that reported their status to the Federal Communications Commission were not using the industry standards, but instead were using their own methods to manage robocalls,” Brown said.

“Companies should always use the highest standard to protect consumers,” which Brown said is STIR/SHAKEN.

That was echoed by YouMail CEO Alex Quilici.

“It’s definitely not enough for these guys to create their own plan,” said Quilici, whose company tracks spam and robocalls.

PHOENIX – Some households have suffered serious threats to their health that went beyond COVID-19 over the past 18 months: domestic violence. Arizona has the fifth-highest rate of domestic violence in the country, according to the World Population Review, and throughout the pandemic, domestic violence calls and fatalities in metro Phoenix continued to rise.

According to the Arizona Coalition to End Sexual and Domestic Violence, 102 domestic violence fatalities were reported in 2020, and 48 in the first six months of this year. Shelters for victims, which saw unused beds last year, are filling up again around the Phoenix area.

What does this mean for domestic violence as Arizonans attempt to get back to normal? Experts agree the pandemic had scant impact on the high rates of violence, and they don’t expect those rates to fall anytime soon.

“I think it’s really important for the community to understand that COVID and the pandemic did not cause domestic violence,” said Myriah Mhoon, CEO of New Life Center. “It became a catalyst of aggravating power-control dynamics that were already existing or that started to exist.”

“It was the first time that we were sitting sometimes weeks if not close to a month of beds not being filled,” Mhoon said.

Claytoonz: How You Doin'?

Pima County health officials warned this week that COVID cases are rising among children 11 and under—a population that remains ineligible for vaccines.

The increase comes about a month after most schools reopened for the fall semester, leading to an increase in cases by 16.5% over the last week.

Kids between 12 and 19 had COVID case growth of 11.7%, said Pima County Chief Medical Officer Dr. Francisco Garcia. The FDA authorized the Pfizer COVID vaccine to be offered to children 12 and older on May 10, expanding possible vaccination coverage in Pima County.

Garcia reported that 73.1% of vaccine-eligible populations (12 and older) have at least one dose of vaccine.

“We see the greatest growth in this middle age group 20 to 44, there were 858 additional cases, representing 41% of the total cases from one week to the next,” Garcia said.

Garcia’s assessment was echoed by Banner Health Chief Clinical Officer Dr. Marjorie Bessel, who said that a majority of COVID patients at Banner Health are in the 20 to 65 age group—and 90% are unvaccinated.

Bessel asked the public to consider getting the vaccine even if they had COVID once before.

“Studies have shown that reinfection rates are 2.34 times more likely in those who remain unvaccinated, which is why vaccination is still recommended by the CDC and medical community even if you’ve had COVID,” Bessel said.

WASHINGTON – Arizona is on pace to record its 1 millionth COVID-19 infection within the next week, and health experts fear that kids in schools and the looming Labor Day holiday will only make matters worse.

The Arizona Department of Health Services reported 979,580 cases as of Friday and its data shows that the state had been averaging 2,941 new cases every day over the past week, as the highly contagious delta variant continued its spread.

Another 53 people died Friday from COVID-19 in Arizona, bringing the death toll in the state to 18,561.

Despite the surge in new cases, health experts said that Arizona continues to lack aggressive mitigation efforts that they said could stem the tide.

“For some time, you certainly haven’t been as aggressive with mask-wearing and vaccination,” Dr. Georges Benjamin, executive director of the American Public Health Association, said of the state.

State officials have refused to issue a mask mandate and Gov. Doug Ducey this week issued an order banning local governments from enforcing vaccination requirements. That came the same week that Ducey unveiled a “relief program” that would direct federal COVID-19 funds to schools that do not enforce mask mandates.

Given the lax mandates in the state, Benjamin said residents have an even greater “degree of personal responsibility” for fighting the virus, especially with the upcoming Labor Day holiday that he expects will worsen exposure.

The convicted child rapist emerged from the tree line without warning, walked quickly past the elders who feared him and entered the Navajo home, where his 15-year-old daughter was feeding her pet rabbits.

A short while later, the 6-foot-3-inch man known for being violent emerged with the girl, promising to return in half an hour. But that was a lie. Ozzy Watchman Sr. was kidnapping his daughter for the second time in six months. 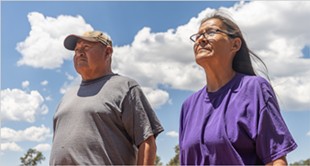 Family members pleaded with tribal authorities to issue an Amber Alert, but it never came. Nearly two weeks passed before Watchman and his daughter were found on June 30 — not by Navajo police or the FBI, which has the investigative lead in such cases, but by a maintenance worker who encountered the two as they scavenged for food.

Child sexual abuse is among the worst scourges on Indigenous communities in North America, yet little hard data exists on the extent of the problem. Some researchers estimate it could be as high as one in every two children.

Dr. Renée Ornelas, a veteran child abuse pediatric specialist working in the Navajo Nation — the largest and most populous tribe in the United States — said practically every family she sees has a history of child sexual abuse.