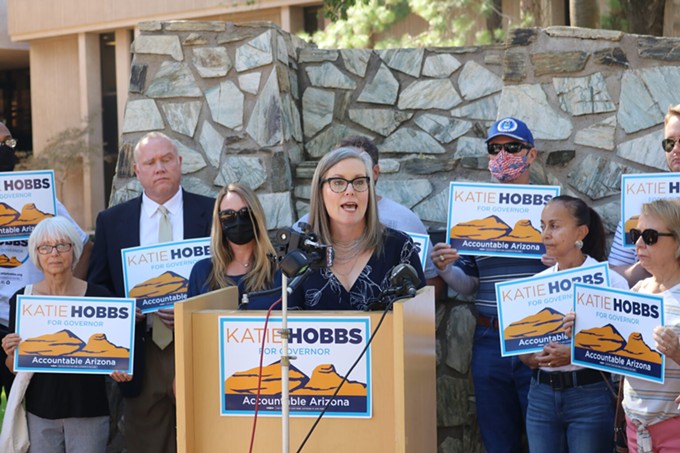 You can change your mind, that's just the way it goes ... Save the Bill & Ted Circle K ... And this newsletter is NOT dedicated to all of our haters.

You’re going to be hearing a lot about “Title 42” in the coming months as the election heats up, so let’s get up to speed now so you don’t have to change your opinion about it and suffer a flip-flop like Democratic gubernatorial frontrunner Katie Hobbs.

Ugh. Get your freaking act together, @SecretaryHobbs. You're blowing this for AZ Democrats.

A brief history is in order:

Democrats are split about what to do with the policy. The number of immigrants attempting to cross the U.S.-Mexico border has skyrocketed in recent months, and there’s an election on the horizon.

Moderate Democrats like U.S. Sens. Mark Kelly and Kyrsten Sinema have urged Biden to keep the policy in place, crediting it as among the few remaining Trump-era policies that are keeping the situation at the border from getting worse. The progressive wing, including U.S. Rep. Raul Grijalva, have urged him to repeal, decrying it as a “cruel relic and policy reminder of the Trump-immigration era.”

And then there’s Hobbs, who at first stuck with the progressives in arguing Title 42 “isn’t working” but backtracked over the weekend, telling CNN the decision to repeal it was "rash” and that lifting the order without a plan to “secure our border” would be “a disaster.”

This is political flack speak for my boss really screwed up her first response so we are going to nuke CNN, @ericbradner & @arogDC. @dennis_welch gave @katiehobbs all the time she needed to say Biden messed up on Title 42 on April 3 but she declined. https://t.co/mPJnhifKfi


Republicans pounced on her newfound support for the order, just like they pounced on her earlier opposition to the order, declaring Hobbs a “windsock,” a “really bad liar” and “uniquely incapable” of leading the state.

For her part, Hobbs claimed CNN didn’t use her whole statement. Of course, the full statement didn’t sway anyone, including Republic columnist Laurie Roberts who rightly pointed out it’s totally illogical.

“So Title 42 isn’t working … but Biden should leave it in place anyway?” Roberts wrote.

If politicians changes their minds on an issue, they should be frank about it. Willingness to learn and change is the hallmark of a good leader. But don’t blame reporters if your flip-flops or mealy-mouthed answers come back to bite you.

Looks like the plan is for the House to adjourn until Wednesday after today's floor session. #AZLeg pic.twitter.com/SfGTFfUlq8


Journalists > banks: Banks stood in the way of many homeowners who otherwise qualified for mortgage assistance from the state as part of COVID-19 relief programs. Government agencies can’t greenlight their applications without banks’ approvals. Once the Republic’s Jessica Boehm contacted Chase Bank on behalf of a homeowner who couldn’t get the bank to sign off on the program, the bank finally signed up. In Surprise, COVID-19 relief money from the county will help fund a community center that targets multiple generations with programs and services. But hey, at least YouTubers can still afford to buy multimillion-dollar vacant lots here.

To keep two more local journalists around Phoenix, we need your paid subscription dollars. It’s only $8 per month to finance this scrappy newsletter.

Thielionaires: Vanity Fair explores the world of the “New Right” where Unabomber Ted Kaczynski is “sometimes referred to with semi-ironic affection as Uncle Ted” for his influence on the movement’s thought leaders. Arizona Republican U.S. Senate candidate Blake Masters features prominently as he fights “against a consumerist techno-dystopia that many on the left have also come to fear.”

We won’t be attempting this: Trying to jump from one plane to another mid-flight is not as easy as you think. Two cousins who tried to swap planes in the air over Eloy did not succeed, though neither was injured, and the Federal Aviation Administration is investigating the incident.

Small but mighty (in a bad way): Quagga mussels are a real pain in the ass for water and other organisms, and attempts to stop the invasive species have so far failed. But the U.S. Bureau of Reclamation wants to find ways, including using nature itself, to fight off the tiny pests, the Republic’s Lindsey Botts reports.


Circle K news roundup: The iconic Circle K (words we never thought we’d write) at Southern Avenue and Hardy Drive in Tempe, which featured in “Bill & Ted’s Excellent Adventure,” might be closing, Phoenix New Times’ Benjamin Leatherman writes. At another Circle K in Tempe, people can buy their snacks by using their phones.

Do nothing get fired: U.S. Rep. Greg Stanton’s new district could be more vulnerable to a Republican challenger — Sabato’s Crystal Ball moved the district from “likely Democratic” to “leans Democratic” earlier this month. Voters in his district told NPR that Democrats in Congress didn’t do much to improve their lives since winning in 2020.

Tough read: A family whose daughter died after an asthma attack said the hospital staff at Banner Desert Medical Center mistreated them and disrespected their religious views while their daughter was in a coma, the East Valley Tribune’s Alex Gallagher reports. Arizona Sen. Kelly Townsend took up the family’s cause and joined a protest supporting the family at the hospital.

none of you are actually leaving twitter!! you're all stuck here with me because we share a disgusting compulsion to be on this platform. hope this helps

A first, but not a last: Olivia Benally will become the first female publisher of the Navajo Times, replacing Tom Arviso Jr., who is retiring from the paper’s top post.

Several bills we’ve written about were signed into law by Gov. Doug Ducey yesterday, so here are just a handful:

AZGOP chair Kelli Ward wrote a book about the audit (“Justified: The Story of America’s Audit”), and that book is free if you have Kindle Unlimited, which you maybe got for free when you recently got a new Kindle. Or at least that’s what happened to Rachel, who has only read the dedication so far and devolved into laughter. The book is predictably dedicated to Trump, who “should still be president today,” but, in an unorthodox move, the dedication includes who it is NOT dedicated to:

Building the “Big Lie”: Inside the Creation of Trump’s Stolen Election Myth