Photo courtesy C-SPAN
From left, Republican Reps. Marjorie Taylor Greene of Georgia and Andy Biggs and Paul Gosar, both of Arizona, in July, when they called defendants in the Jan. 6 attack on the Capitol “political prisoners.” Critics charge all three engaged in insurrection and should be barred from the ballot, but a judge has dismissed the case against Gosar, Biggs and state Rep. Mark Finchem.
<![endif]—>

WASHINGTON – A voters’ advocacy group said it will appeal a Maricopa County judge’s decision to dismiss its lawsuit that sought to ban three GOP lawmakers from the ballot for their support of the Jan. 6 insurrection.

Superior Court Judge Christopher Coury said his Friday ruling “neither validates nor disproves” the claim that U.S. Reps. Andy Biggs and Paul Gosar and Arizona Rep. Mark Finchem engaged in insurrection – only that the voters did not have standing to challenge their qualification for the ballot on those grounds.

Biggs, R-Gilbert, on Friday welcomed the dismissal of what he called a “frivolous” lawsuit aimed at “political harassment.” And in a statement Sunday, Gosar, R-Bullhead City, called the claims “abusive” and praised Coury as a “good judge who understands the law and the rules.”

But Free Speech for People, the voting rights organization that backed the lawsuit, called the ruling “contrary to the law” and said it will appeal to the Arizona Supreme Court.

“Arizona is not exempted from the mandate of Section 3 of the 14th Amendment to the U.S. Constitution,” the group said in a statement. “A candidate who has taken an oath of office and then engaged in insurrection has no place on a future Arizona ballot.”

Arizona’s primary election is not until Aug. 2, but counties must mail out the first ballots on June 18, leaving only about six weeks for the courts to determine if the three lawmakers should be on or off the ballot. An official with the Maricopa County Recorder’s Office said Monday that the office is waiting on direction from the county attorney’s office following last week’s ruling.

The Arizona case is one of three backed by Free Speech for People, which pressed similar claims against Republican Reps. Madison Cawthorn of North Carolina and Marjorie Taylor Greene of Georgia.

All three cases cite the 14th Amendment, which prohibits people who have taken an oath to defend the Constitution from holding office if they then “engaged in insurrection or rebellion” against the government.

A federal judge in North Carolina agreed to dismiss the case against Cawthorn, while another judge said the case against Greene should proceed. Greene testified Friday in an administrative hearing on her case in state court.

The Arizona case cited a state statute on elections that says “any elector may challenge a candidate for any reason relating to qualifications for office,” citing age, residency and other criteria prescribed by law.

The Arizona voters claimed that the Gosar, Biggs and Finchem were disqualified by their support for the Jan. 6 protests that led to the storming of the Capitol as Congress was about to certify the election of President Joe Biden over Donald Trump. That amounted to insurrection, they said.

But Coury said that a 19th-century law to enforce the disqualification clause of the 14th Amendment reserved that right to Congress, not private citizens. And he said the state law limits citizens to challenging qualifications “prescribed” in state law – age, residency and the like – but does not allow them to challenge “proscribed,” or prohibited, actions.

The judge rejected the voters’ request to let the case proceed to an “advisory evidentiary hearing” to determine whether the three lawmakers were guilty of insurrection, noting the tight time frame for a decision and the “complex constitutional, legal and factual issues” that would need to be decided.

Coury added in a footnote that his ruling does not mean that the lawmakers cannot be held accountable for their actions with respect to Jan. 6, simply that “there may be a different time and type of case in which the Candidates’ involvement in the events of that day appropriately can … be adjudicated in court.”

“And, irrespective of this decision, there ultimately will be a different trial for each Candidate: one decided by Arizona voters who will have the final voice about whether each Candidate should, or should not, serve in elective office,” he wrote.

Finchem, R-Tucson, did not respond to a request for comment Monday. But his attorney, Jack Wilenchik, called Coury’s decision a “common sense ruling,” as candidates can only be barred from office if they have been convicted of insurrection or rebellion.

That was echoed by Gosar’s attorney, Alexander Kolodin, who said the lawmakers now will focus on making “sure that the Arizona Supreme Court affirms that you can’t be kicked off the ballot because you said some things your political opponents don’t like.”

Kory Langhofer, Biggs’ lawyer, in an email called the opinion “the most thoughtful and well-researched opinion dealing with insurrection allegations in this election cycle. I expect it to be quoted and cited by other courts around the country that are with pending insurrection cases.” 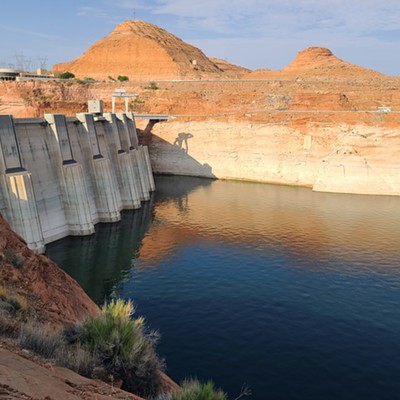