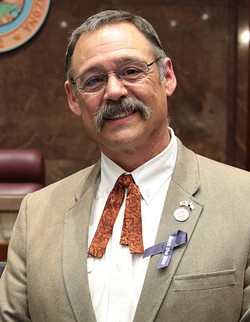 Photo By Gage Skidmore
Rep. Mark Finchem
A new investigation by the Washington Post into Donald Trump ally Roger Stone sheds light on his push for pardons for two Republican members of Arizona’s congressional delegation and work behind the scenes to overturn the 2020 election with people who would later support the Maricopa County “audit.”

The investigation by the Washington Post reviews previously unseen documentary footage by Danish filmmakers who had unprecedented access to the conservative political consultant, including on and after Jan. 6.

The Post obtained a copy of what was dubbed the “Stone Plan” to lobby for Trump to preemptively pardon a number of people, including himself, U.S. Reps. Andy Biggs and Paul Gosar of Arizona.

“Hell, Pardon not only Gaetz, Brooks, Biggs, Gosar, Jordan, Cruz and Hawley but every Republican remember (sic) of either House or Senate who voted for you,” Stone said in the memo obtained by the Post, referring to a variety of Trump political allies in Congress. “Pardon a movement. Give the Deep State the finger.”

Both Biggs and Gosar sought preemptive pardons for their roles in the Jan. 6 Capitol riots but neither received one. When reached by the Post, Gosar’s office said they were unaware of Stone’s effort and did not seek a pardon, stating he did nothing wrong.

Ali Alexander, one of the lead organizers of the “Stop the Steal” protest that culminated in the violent Jan. 6 riot at the U.S. Capitol said in a series of deleted videos that Biggs, Gosar, and Alabama Congressman Mo Brooks “schemed up” the plan to put “max pressure on Congress while they were voting” on whether to certify the results of the Electoral College.

In the footage reviewed by the Post, Stone met with Alexander at his home in Florida in late November and the two had deep connections, having been photographed at Republican events several times in prior years, the Post reported.

Alexander is connected to another Arizona politician as well, state Rep. Mark Finchem, a Republican from Oro Valley. After the events of Jan. 6, Alexander would say that the “Stop the Steal” movement had “taken over Arizona” due to Finchem.

Finchem was present at the Capitol on Jan. 6 and his story on where he was that day has not been consistent. Currently, he is fundraising to hire an attorney due to a subpoena from the congressional Jan. 6 Commission, saying he needs the attorney to fight off the “kangaroo court.”

In November, Finchem brought a number of Trump allies to Phoenix for an election integrity hearing that he would later say would help to convince Senate leadership to pursue the so-called “audit” of the election in Maricopa County.
The hearing, held at a downtown Phoenix hotel, included former New York City Mayor and Trump attorney Rudolph Giuliani. Christina Bobb, a correspondent with the propagandistic One America News Network, would later forward information from the hearing on behalf of Giuliani to Arizona Senate President Karen Fann, emails would reveal. Bobb, a lawyer by trade, had been working with Giuliani on multiple “election fraud” related efforts.

Stone also met with disgraced former Gen. Michael Flynn quickly after Trump’s electoral defeat. On Nov. 5, Stone drew up an action plan to document “fraud” in battleground states and that very same day Flynn began using the “Stop the Steal” hashtag, according to the Post.

Flynn and his allies have invested massive amounts of time and money in Arizona, specifically in the “audit” efforts. The two groups that contributed the most money to fund the audit effort are both directly associated with Flynn. Two pro-Trump nonprofit groups, the America Project and America’s Future, contributed approximately $4 million combined to the “audit.”

The America Project, a 501(c)(4) nonprofit run by former Overstock.com CEO Patrick Byrne, paid the most to fund the “audit,” shelling out $3.2 million. Its site and promotional material uses Flynn to garner donations and Byrne is a long-time ally of the Flynn family.

America’s Future was the second largest contributor to the “audit” efforts and is a project solely run by Flynn. The group paid the Florida-based Cyber Ninjas $976,000.

Doug Logan, the CEO of Cyber Ninjas, met with Flynn and attorney Sidney Powell in November 2020 along with Byrne at the house of QAnon conspiracy theorist Lin Wood to discuss the 2020 election, according to Byrne’s book.

Cyber Ninjas, the firm which conducted the Arizona “audit,” found no proof of fraud in the election and confirmed President Biden’s victory in the state.