The Daily Agenda: Today in Biting the Hand that Feeds You

Bandit Riveredge
You've been voting illegally for years and just didn't know it!

It’s a lawsuit in name only … The GOP Rogers detractors could maybe field a basketball team now … And welcome to the world, AZ Luminaria!

The Arizona Republican Party is suing to stop you from voting by mail, arguing mail-in voting wasn’t in the Arizona Constitution.

Having struck out at getting politicians to ban early and mail-in voting in favor of “1958-style” voting, the AZGOP filed a lawsuit asking the Arizona Supreme Court last week attempting to ban mail-in voting, or at least return to 1991-style voting, before the state adopted “no-excuse” early voting as we know it.

The lawsuit argues that the way we vote has never been allowed in the first place. (Decertify all elections since 1992, anyone?) Instead, the party says, voting is supposed to take place “at the polls,” according to the constitution, which was written in 1910, just after the invention of the Ford Model T. (Arizona’s Law has a copy of the full suit.)

Text I received from a friend in response to the @azgop lawsuit to ban early voting:

"All the women who have been Secretary of State in Arizona have been acting illegally because the constitution says "he."

The argument that people should need an excuse to vote early aligns with a bill from Arizona Sen. David Gowan, which would only allow early ballots for people who can’t physically make it to the polls, rural Arizonans who live far from polls or those over age 65 (that sounds like … mostly Republicans).

Bills this session to fully end early voting haven’t gained steam. And, as we noted before, at least one Republican senator won’t vote for anything that impedes his ability to vote an early ballot. That’s right: Plenty of Republican lawmakers use the early ballot system, too!

Getting rid of early mailed ballots would be a sea change for Arizona. While some states scrambled to start mail voting programs during the pandemic, Arizona was long ahead of the curve. It has been popular and widely used, by both parties, for 30 years. In the August 2020 primary, more than 90% of Maricopa County voters cast an early ballot, mostly by mail.

But the party doesn’t represent its voters. It embraces the most extremist ideas, even at the risk of alienating and disenfranchising fellow conservatives. It follows the whims of its director, Kelli Ward, who has perpetuated all manner of election conspiracy theories after her party lost the 2020 presidential election.

"OTHER" is now the largest "party" in Maricopa County.

It’s never a surprise to find a lawmaker or three who opposes voting by mail. It is, though, a shock to see a state party attack the way its own voters cast their ballots in a longstanding and demonstrably secure process enjoyed by the vast majority of Arizonans.

To their credit: More Republicans are denouncing Republican Sen. Wendy Rogers’ string of pro-Russia and anti-Semitic tweets calling Ukrainian President Volodymyr Zelensky, who is Jewish, a “globalist puppet for Soros and the Clintons;'' declaring sanctions on Russia from the West are “just as bad as invading Ukraine;” and asking, if Zelensky was so great, “why didn’t he amass troops and tanks to defend his country.” A majority of the Maricopa County Supervisors called her out personally, including Chair Bill Gates and Clint Hickman, who described her rhetoric as “hateful, dangerous, paranoid (and) un-American.” Republican Sen. T.J. Shope called her comments “bullshit.” Meanwhile, Senate Republican leadership put out a statement that didn’t mention her directly, but was quite a contrast from Rogers’ rants.


It's not every day that legislative leadership puts out a press release subtweeting one of their own members. https://t.co/eoxJzsctJR


We’ll believe it if we see it: And Senate Republican Leader Rick Gray confirmed Republican senators are talking about a possible censure of Rogers over her repeated comments, the Arizona Mirror’s Jeremy Duda reports. Senate President Karen Fann was squishy about the whole idea when Duda asked her. And Rogers’ response was heinous, per usual.


Any press is good press?: The Atlantic’s Elaine Godfrey wrote a not-so-flattering profile of “democracy defender” and “liberal icon” Katie Hobbs, who taught the reporter to smash a golf ball but still failed to impress.

“I’ve interviewed many politicians who speak like Hobbs, preferring generalities to specifics” Godfrey wrote. “Plenty of talented legislators aren’t especially good at selling themselves or their ideas. Talking with Hobbs reminded me of interviewing the Iowa Democrat Fred Hubbell ahead of his challenge to Republican Governor Kim Reynolds. Hubbell is a smart guy. But he was awkward and stiff, he didn’t have a particularly bold agenda, and he ended up losing to Reynolds in a year when Iowa Democrats otherwise made big gains.”

It’s a theme: We’ve mentioned a few times how Gov. Doug Ducey’s administration is big on announcing huge investments into pandemic-related programs, but not so big on actually spending that money. Well, the state was in danger of losing pandemic-related federal housing funds because it didn’t spend the money, so Ducey gave the money to cities instead, the Republic’s Catherine Reagor and Jessica Boehm found.


It’s a theme, part II: Phoenix area home prices are still out of control, Reagor wrote in another piece. The median home price has doubled in five years to almost $460,000. Prices aren’t much better in Tucson, the Arizona Daily Star’s Gabriella Rico reports. The median price in the Old Pueblo was about $422,000 in January, and was up 30% from last year in one area. But don’t worry: Your elected leaders are working on culture-war pablum instead of trying to figure out how we can all afford a place to live here.


WWJMD?: Late Republican U.S. Sen. John McCain really hated Russia and Vladimir Putin and was beloved in Ukraine (he has a street named after him in Kyiv). McCain said a lot about the conflict between the two countries over the years, the Republic’s Dan Nowicki reminds us, including this gem, when Russia imposed sanctions against him personally in 2014:

I guess this means my spring break in Siberia is off, Gazprom stock is lost & secret bank account in Moscow is frozen http://t.co/TgwZneD4HY

The electronic equivalent of Penis Man: You probably shouldn’t hack into those electronic message boards on road construction zones because it’s illegal and the consequences are pretty severe. It’s also dangerous, we’re sure. But that didn’t stop people from changing one sign to say “SUCK MY ASSHOLE” and another to say “FUCK PUTIN” in recent days, and the Phoenix New Times is all over it.

It’s for science: The Arizona Department of Health Services is seeking academics to do marijuana clinical trials to see if it helps with a host of different afflictions. KJZZ’s Matthew Casey noted that the department is offering up to $5 million per year in grants to scientists who can do FDA-approved studies. The request comes after lawmakers approved legislation to spend medical marijuana money on clinical trials.

We don’t need $5 million to study pot — just $80 per year so we can keep writing this newsletter. Please become a paying subscriber so we don’t have to enroll in “clinical trials” to pay the bills.

We’re not technically number 1: Arizona has the third-highest COVID-19 death rates in the country (behind New York City and Alabama), and Republic health reporter Stephanie Innes tried to figure out why. It’s complicated, but here’s the nut graf:

“Some of the common themes that experts theorize as contributing to Arizona's sobering death toll are misinformation, a relatively low vaccine uptake, the lack of a statewide mask mandate throughout the pandemic, questionable leadership decisions, a large portion of high-risk populations, and irresponsible human behavior,” Innes wrote.

Probably don’t name things after people either: The Department of the Interior’s Derogatory Geographic Names Task Force published a list of possible replacements for the 664 federal land units that use the same derogatory term as a certain former Arizona peak, the Arizona Mirror’s Shondiin Silversmith reports. Arizona has 67 geographic features that use the term, and the task force has a list of suggested replacements.

Only one person voted against it in the House: Juveniles in custody and their families wouldn’t be forced to pay fees and costs for services like court-ordered counseling or attorneys if a bill from Rep. Walt Blackman, approved by the Arizona House, passes the other chamber.

Are you a facility owner in @MaricopaCounty with a site that's at least 1,600 sq. ft., is ADA compliant and has A/C and restroom access? Email us at pollplace@risc.maricopa.gov if you’re interested in becoming a voting location for the August & November elections! #SiteSaturdays pic.twitter.com/IkSfLnUulB

Are you sure you won’t botch it again?: Attorney General Mark Brnovich’s office asked the Arizona Supreme Court to issue an execution warrant for Clarence Dixon, who’s been on death row for decades. The state hasn’t executed anyone since 2014, when it botched the lethal injection execution of Joseph Wood.

Arizona voters will get to weigh in on at least one ballot measure related to voting after the Arizona House and Senate approved concurrent resolution to ask voters to put new voter ID laws in place.

As we’ve noted before, it’s not the only voting-related ballot measure that voters could see on their 2022 ballot. Liberal groups want a measure with a bevy of voter access laws on it, and a conservative measure would limit early voting.

But those measures will need hundreds of thousands of signatures to make it onto the ballot. Not so for a strike-everything amendment to Senate Concurrent Resolution 1012, which the House approved on party lines yesterday. A striker on House Concurrent Resolution 2025 mirrored the Senate striker. Since both chambers approved the mirror bills, it now heads to voters this fall.

If voters approve, it would require early ballots to not only include a signature, but a voter ID like a driver’s license number or the last four digits of a Social Security number.

The proposal, backed by the Arizona Free Enterprise Club, was announced last year as a ballot measure, though the backers ultimately succeeded at convincing lawmakers to run a resolution instead of needing to gather signatures.

The idea is being pushed by a special interest lobbying group known for funding multiple lawsuits that favor business over regular folk: "Members of the Arizona Free Enterprise Club sat in the gallery all day and brought donuts for lawmakers" 3/https://t.co/Q4i7oivU5X

Instead of something to laugh at today (since we already had a bit of a laugh at the arguments in the AZGOP lawsuit), we’ll give you two nice things to start the day.

And, secondly, if you’re a longtime reader, you’ll recall our love for libraries and our consistent praise for the state librarians. They put together this retrospective about Arizona’s flag and how it came to be, which is basically a who’s who of early Arizona. 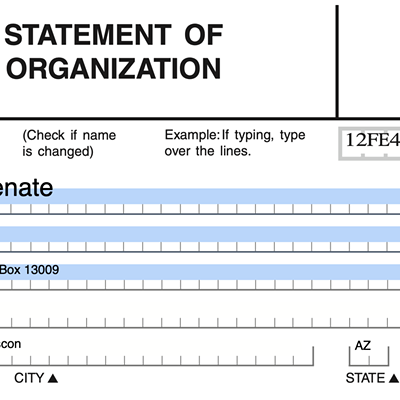 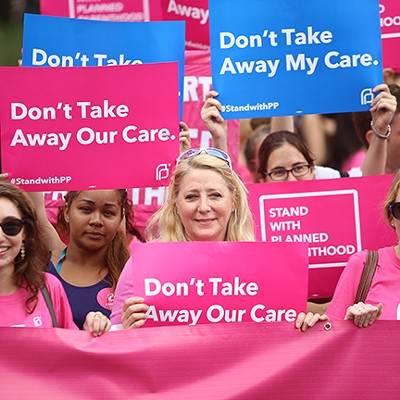