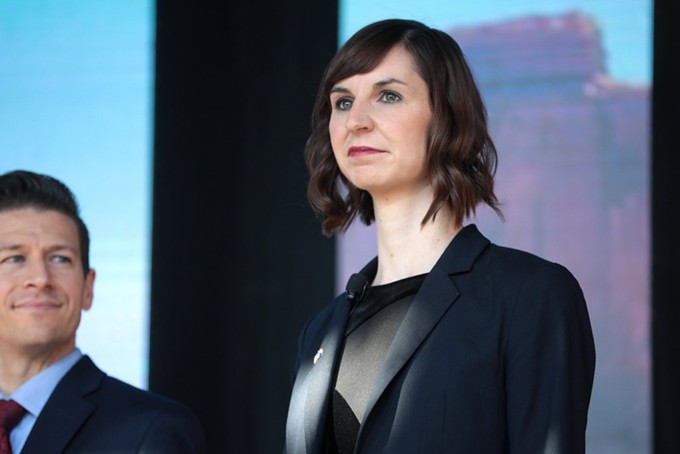 Superintendent of Public Instruction Kathy Hoffman used her annual State of Education address to urge lawmakers to raise a constitutional spending limit on K-12 schools before they face major budget cuts in a few weeks.


Speaking to the Senate Education Committee on Tuesday, Hoffman, a Democrat elected in 2018, said she’d originally planned to give a different speech. But because of legislative inaction, public schools will face a collective 16% budget cut, equal to more than $1.1 billion, if the legislature doesn’t suspend the spending limit by March 1.


“We all agree that we must do everything possible to keep our schools open. But the biggest threat of widespread school closures comes not from the virus, but a school finance relic from 1980 — the aggregate expenditure limit,” she said. “In 21 days, public district schools in every county will face enormous and devastating budget cuts if you fail to diffuse the ticking time bomb that will force them to close.”


K-12 funding in Arizona has never been higher. But without legislative action, schools won’t be able to spend the money that lawmakers provided last year.


In 1980, Arizona voters approved an aggregate statewide spending limit for K-12 schools. The legislature can approve a one-year exemption of that limit with a two-thirds vote in each chamber, but Republican leadership hasn’t made any moves in that direction since the legislative session began last month.


“If schools close because they are not authorized to spend money already sitting in their bank accounts, the blame will lie with you, not our public schools,” she said.

Rep. Jennifer Pawlik and Sen. Christine Marsh, both Democrats, have introduced resolutions to lift the spending cap, but neither has received a committee hearing. Next week is the last week for legislative committees to hear bills in their chamber of origin, though the House speaker and Senate president can authorize such hearings after the deadline.


“Let me be perfectly clear: Inaction is not an option, and it’s appalling that this wasn’t the first issue addressed when the session started a month ago,” Hoffman said.

Hoffman explained to the committee members what consequences their own school districts will face if the cap isn’t lifted.

If schools close because they are not authorized to spend money already sitting in their bank accounts, the blame will lie with you, not our public schools.
– Kathy Hoffman, state superintendent of public instruction

Boyer, a Glendale Republican, seemed receptive to raising the cap, and noted that the legislature still has three weeks to act. But he also sought acknowledgement that the reason Arizona is about to exceed the cap is because GOP lawmakers, whom Democrats routinely accuse of underfunding K-12 education, have increased funding for schools by so much.


He noted that the legislature recently increased district additional assistance by $700 million. The reauthorization of Proposition 301, a voter-approved sales tax from 2000, maintained about $600 million in annual funding that was set to expire. And the 20×2020 plan that Gov. Doug Ducey spearheaded to increase Arizona teacher salaries, which are among the lowest in the United States, cost another billion dollars, Boyer noted.


“What we hear a lot is, well, we’re cutting education. But the reality is the opposite. The reality is the reason why we’re at the limit that we are is because we, the legislature, have put so many dollars into K-12 — one could argue at the detriment to corrections, public safety, other areas of government that desperately need it,” said Boyer, who works as a teacher at a charter high school.


One contributing factor, though not the only one, is that voters exempted Prop. 301 funding from the expenditure limit in 2002. When lawmakers and Ducey reauthorized the Prop. 301 tax in 2018, they didn’t ask the voters to do the same.


Hoffman acknowledged that the legislature has increased K-12 funding and thanked them for those budget increases. Nonetheless, the budget cuts they’ll suffer if the spending cap isn’t increased would be devastating.


Sen. Rick Gray, R-Peoria, questioned why school districts didn’t plan ahead for the possibility, knowing full well that the spending limit was looming. Hoffman responded that districts had no reason to believe that lawmakers wouldn’t permit schools to spend the money that they themselves had allocated, which she said would amount to a “broken promise.”


Marsh, a Phoenix Democrat and former Arizona teacher of the year, echoed that sentiment.


“We gave the schools the money. Period. Full stop. We now are the only ones who can grant them the ability to spend the money that was already appropriated and allocated to them,” Marsh said.

Republican Lawmakers Aim To Do Away With Vote-By-Mail