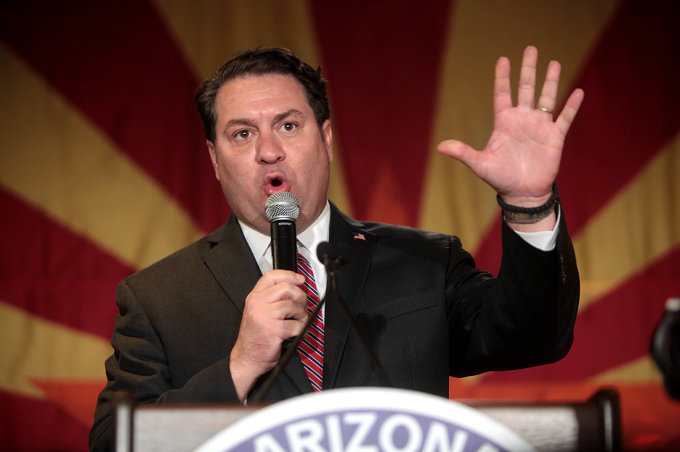 Courtesy of flickr.com
What is Arizona Attorney General Mark Brnovich hiding from us?

It's never boring to live in Arizona (and that's not a compliment) ... Brnovich should tell us his settlement with the Bar ... And the national press discovers Paradise Valley.

If you need more proof that Arizona was the hub of the attempted coup to overturn the 2020 election and install the former president for four more years and remains the center of attempts to subvert our fragile democracy, there’s a pair of stories in the New York Times you should check out.

A brief recap: After being forced to resign and pardoned for lying to the vice president and others about his dealings with Russia, Flynn, a one-time national security advisor to former president Donald Trump, allegedly pushed plans for a military coup following Trump’s loss, either by having the National Guard seize voting machines in contested states like Arizona or having Department of Homeland Security do it.


If you don’t know much about Flynn, he’s become something of a martyred hero to the Stop the Steal crowd. Here’s a paragraph from Draper’s piece that really sums him up:

“In an interview in late January with the right-wing conspiracy website Infowars, Flynn accused George Soros, Bill Gates and others of creating the coronavirus so they could ‘steal an election’ and ‘rule the world.’ In another interview, he floated the rumor that ‘they’ may be ‘putting the vaccine in salad dressing,’” Draper wrote.

Well, long before Arizonans had heard the name Doug Logan, formerly chief ninja at the now defunct Cyber Ninjas company, Flynn had heard of him. On the day before Thanksgiving 2020, Logan was among the guests at a meeting of the minds with some of the president’s closest advisors, Draper writes.

Draper’s piece offers a Flynn-centric telling of the attempted overthrow of the presidency, and Arizona features heavily in the background. (As more reporting trickles out detailing the dark days leading up to and following the Jan. 6 attacks on the U.S. Capitol, we’re often struck by details backing up Arizona woman Staci Burk’s story about falling down the rabbithole of election conspiracies. Draper’s piece, for example, includes reports of Flynn’s allies allegedly running operations to fish for dirt to blackmail congressmen elsewhere into supporting audits. It also includes many of the same central characters of Burk’s story, including Flynn, his brother Joe Flynn, former Michigan cop and overstaying houseguest Geoffrey Flohr and his paramilitary team, First Amendment Praetorian.)

Then-Attorney General William Barr rejected the idea of seizing voting machines (and even Rudy Giuliani shot it down, allegedly saying “we would all end up in prison”), and attempts to thwart state and congressional certification of the election failed, Flynn and friends helped cook up, fund and run the Arizona audit.

And Arizona Senate President and “Audit Queen” Karen Fann wants to know if reporters will be criminally charged for interfering with the election.

Well said! Wonder if the liberal media can be charged with election interference? https://t.co/ULqHSF2WUx

But if you think Bowers’ duodecuple assignment of Fillmore’s House Bill 2569 is the end of Arizona lawmakers’ attempts to overturn democracy, take note of Fillmore’s comments to the Times.

Meanwhile, efforts to Stop the Steal are ongoing at the Arizona Capitol, fueled by the audit’s vague and almost unanimously debunked claims of “potential issues” in the election.

Or, at least, they would be if not for House Speaker Rusty Bowers who was the non-participating subject of a glowing profile in the New York Times this weekend depicting his grizzly murder of a bill to give Arizona lawmakers the power to overturn elections they don’t like. (Arizona Rep. Mark Finchem also made the Times this weekend, where a photo of him accompanied a story about far-right conspiracies at a border butterfly center.)

“I’m an old-school person. I do not go calmly. I do not go quietly,” Fillmore warned. “I believe Republican voters are solidly in line with me."


If you’re sure you won, you should tell the public the terms: Attorney General Mark Brnovich agreed to settle two complaints filed with the State Bar of Arizona, but the terms of the agreements are confidential. The complaints were filed by Secretary of State Katie Hobbs and the Arizona Board of Regents over the AG’s conduct and failure to represent state entities. While it’s unclear what Brnovich will need to do to satisfy the terms of the diversion agreements, the AG could disclose the terms himself if he wanted.

Time is a construct: School districts around the state grow more alarmed about the pending spending limit deadline as it quickly approaches. Several told the Republic’s Mary Jo Pitzl that the deadline passing without action would force their schools to cut basic services, like ending the school year early or cutting teachers and staff. But Gov. Doug Ducey apparently doesn’t feel the urgency: He told KTAR last week that there’s plenty of time still to address the deadline, which is March 1 (and February is notably the shortest month).

Rest in peace: Maricopa County Superior Court Judge Rosa Mroz died this weekend. She was the latest in a string of pedestrians who died after being hit by cars in Phoenix, an ongoing problem in the state. Mroz’s colleagues praised her public service and generosity, and Ducey called for flags to be lowered on state buildings today in her honor.

Your obligatory roundup of bill stories:

hello, OSHA? I just had to listen to Jake Hoffman saying "dry humping saves lives" on the house floor.

The joys of living in a society: Phoenix residents are getting trashier, and the cost for all the trash we’re collectively producing is increasing our city bills about $7 per month on average, KJZZ’s Christina Estes reports.

The song that never ends: COVID-19 cases in the latest wave may be declining, but hospitals say they’re still struggling to keep up with demand, so they’re adding staff and postponing surgeries, the Republic’s Stephanie Innes reports. The federal government dispatched emergency health care workers to help, but not enough to meet the need. And another state report found that vaccination helps protect against getting the disease, being hospitalized from it and dying, though the omicron variant did drive an increase in breakthrough cases, KJZZ’s Katherine Davis-Young reports. Plus, now that the federal eviction moratorium is over, landlords in Maricopa County are again trying to kick out tenants who struggle to get aid from programs that are supposed to help them.

More cities to follow: The City of Phoenix joined Goodyear and Tempe last week in designating Juneteenth as a paid holiday for city employees. While the date is already an official federal holiday and the state recognizes it, there’s no movement at the state level to make Juneteenth an official holiday with a paid day off, the Republic’s Jen Fifield reports. And considering the very poor track record Arizona had with Martin Luther King Jr. Day, we won’t hold our breath.

Like the city of Phoenix, we are also “collecting more trash and more money” this year. Or at least we’re trying to, and there’s no shortage of trash to go around in Arizona politics. To help out with the “more money” part, it’s $8 per month for a paid subscription (and it comes with a free sticker, if you fill out this form).

Jail on hold: Jeffrey Preston Lee, a former emergency preparedness manager in Coconino County who misused public funds, will get a temporary break from jail because COVID-19 cases are spreading quickly at the detention center, the Arizona Daily Sun’s Bree Burkitt reports.

Put him in, coach: Arizona Sen. T.J. Shope, who is not a college football player or coach as far as we know, thinks Arizona State University should fire its football coach and athletic director. The ASU fan and graduate shared his thoughts about his on Twitter and it made the news.

This was literally an episode of “Black Mirror”: Homeland Security could start using “robot dogs” at the border, which is exactly as dystopian as it sounds.

Coming soon to rural areas near you: Some parts of unincorporated Maricopa County, like Rio Verde Foothills, aren’t able to get water now as wells run dry, and hauling or getting water from stations in cities might not be accessible as shortages set in, the Phoenix New Times’ Kristen Mosbrucker reports. The state couldn’t pass legislation to curb development that’s taxing the area, Arizona Sen. John Kavanagh told a community meeting, while the county and its supervisor for the area, the newly appointed Tom Galvan, aren’t responding quickly to the issue, residents said.

Hopefully less stinky: A project to finally address sewage problems at the U.S.-Mexico border broke ground last week and involves many layers of government and millions of dollars in repairs, the Nogales International’s Jonathan Clark reports. But the Nogales mayor said the repairs are just a bandaid on the International Outfall Interceptor.

Just asking questions: Yes, why are rich people from around the country moving to the wealthiest part of the Phoenix area to a “little-known” hamlet called Paradise Valley, where the governor of Arizona lives? The world may never know, but you can read about it in the Wall Street Journal.

Congrats: Shelly C. Lowe, a Navajo woman who grew up in Ganado, was confirmed by the U.S. Senate last week to serve as the chair of the National Endowment for the Humanities.

A pair of bills backed by the Arizona Chamber of Commerce and Industry that passed the Senate last week would protect companies from getting sued.

Senate Bill 1092 would shield sellers of a product from liability lawsuits if the seller didn’t alter the product, leaving the liability with the manufacturer. SB1157 would add additional requirements on asbestos exposure lawsuits and limits the ability to sue third parties that are only tangentially involved.

Republicans argued both are needed to stop frivolous lawsuits, and both received some bipartisan support: Democratic Sen. Sean Bowie voted for SB1092 and he and Democratic Sen. Christine Marsh supported SB1157.

The Center for Arizona Policy’s forum Saturday featuring Republicans running for U.S. Senate and the Governor’s Office was, as one business Republican put it, “nutty, nutty stuff.”

Besides the obvious questions about abortion from the state’s pro-life lobbying group, the candidates fielded a host of questions about their own pasts. Matt Salmon tried to account for his role in ASU’s Confucius Institute, Karrin Taylor-Robson was asked about her votes, or lack thereof, as a member of the Arizona Board of Regents and Kari Lake was called to task for being a member of the 27-year veteran of the #FakeNews.

Unfortunately, the video of the event has been made private, but we think the following tweets reconstruct the spirit of the event:

All candidates sidestep the question and do not disclose their vaxx status.

At @azpolicy forum this AM, @bgmasters, Gen. McGuire, Olson, and Lamon on stage:@cathiherrod: Attorney General Brnovich was invited but declined to attend, citing a conflict

Salmon & Robson appear to have formed a RINO ticket against @KariLake.@gaynorforgov is just happy to be there.

Thanks Kari, means a lot coming from a fake news, Obama-Biden donor like you!#AZgov https://t.co/F9EAiOTvG7 pic.twitter.com/FKdBSFXnrm 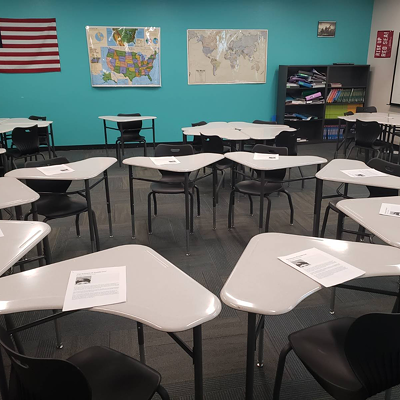 The Friday Edition: Vaxxed and Relaxed at the Front of the Class

The Daily Agenda: Vote Like Your Ability to Vote Depends on It