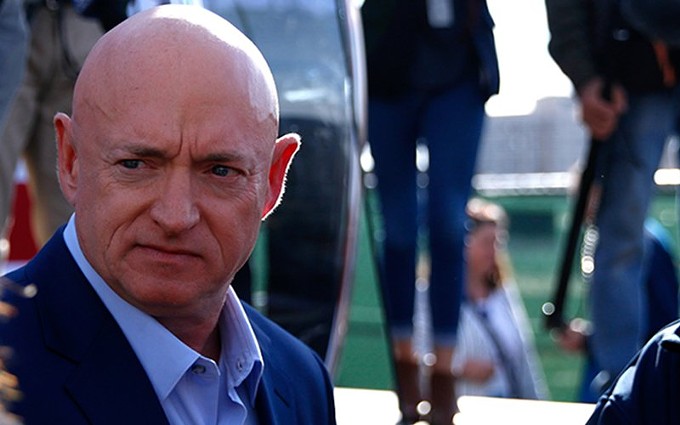 File photo by Meg Potter/Cronkite News
Sen. Mark Kelly, D-Ariz., pulled in more than $27.5 million in campaign contributions in 2021, the fourth-most among all Senate candidates in the nation. But analysts said the money is no guarantee of a win against a fairly well-funded group of GOP challengers in a tough year for Democrats.
WASHINGTON – Arizona Democratic Sen. Mark Kelly has raised more than $27.5 million for his reelection bid this fall, almost twice the total raised by a half-dozen Republican challengers, according to new campaign finance reports.

But political analysts said Kelly’s “giant war chest” – the fourth-most among Senate campaigns nationwide in 2021 – does not guarantee a win in a state like Arizona during a year that is expected to be rough for Democrats.

“He could have unlimited amounts of money … but if the political environment is really bad for Democrats, as it might be, there may be no amount of money he could spend that saves himself,” said Kyle Kondik, managing editor of Sabato’s Crystal Ball at the University of Virginia Center for Politics. He calls the Arizona Senate race a toss-up.

But for now, Kelly’s in a good position. Besides a sizable fundraising lead, he does not have a Democratic primary challenger, while his would-be Republican opponents face a bruising and costly primary before they can turn their sights on Kelly.

A poll released Tuesday by OH Predictive Insights showed Kelly would get 42% of the vote to 38% for any Republican candidate, with 19% of voters undecided. The online poll of 855 registered Arizona voters was taken Jan. 11-13 and has a margin of error of plus or minus 3.4%.

Attorney General Mark Brnovich led the Republican field in the poll, with 25% of GOP voters, with Mick McGuire, the former adjutant general of the Arizona National Guard, in second place with 11%. The two biggest fundraisers on the Republican side, relative unknowns Jim Lamon and Blake Masters, finished in the single digits in the poll.

Lamon’s campaign has been largely self-funded so far: The businessman loaned $8 million of his own money to his campaign. And Masters’ FEC report does not include the Saving Arizona PAC, a political action committee funded with $10 million from PayPal founder Peter Thiel. Masters is a Thiel protege, co-authoring books with him and serving as an officer of Thiel Capital and the Thiel Foundation.

“If you compare the candidates and take out the self-funding, everyone’s on competitive ground,” said McGuire campaign spokesperson Lisa James, who said the campaign is “very confident” about its current position.

The crowded field could work to the detriment of the GOP, with the primary not until August, just three months before the general election.

“Because of the long campaign, you’re going to see the candidates turn on each other to try and differentiate themselves from each other,” said Bill Scheel, a partner with the Arizona consulting firm Javelina.

Another challenge for Republicans is name recognition. Except for Brnovich, few are well-known to state voters.

“It’s pretty obvious that none of the Republican candidates have really caught on with the donors yet,” Scheel said. “And I think the fact that you have four candidates makes that more difficult because there hasn’t been a clear front runner.”

That could change if former President Donald Trump gets involved. He has so far refused to endorse a GOP candidate in the Senate race.

“One of the biggest questions in the Republican primary is what does former President Trump do?” said Nathan Gonzales, the editor and publisher of Inside Elections. “Having his endorsement, particularly in a crowded race, could help one candidate get over the top.”

But Gonzales added that Trump “can be a blessing and a curse for Republicans,” particularly in a state like Arizona which narrowly went for President Joe Biden over Trump in 2020.

Whoever emerges on the GOP side, analysts expect the race will tighten and the fundraising on both sides will continue to increase.

Few doubt the ability of Kelly, who raised more than $101 million for his 2020 election and who analysts variously referred to as a “fundraising juggernaut” and “fundraising behemoth.” His latest FEC report said he had $18.6 million cash on hand compared to $8.7 million for all the GOP candidates combined.

“I would expect him to keep getting bigger and bigger totals as we get closer to election day,” said Jessica Taylor, the Senate and governor editor of Cook Political Report with Amy Walter.

Kondik said Kelly has enough money to get his message out, but so do the Republicans. Kelly’s current funding lead will only go so far in a year that will be “pretty challenging for the Democrats, both in Arizona and across the country,” Kondik said.

The campaign is sure to draw national attention: Arizona is considered a swing state and, with the current Senate divided 50-50, control of the body goes to whichever party can pick up a seat.

“Every single Senate race is the tiebreaker, given that we are in a 50-50 Senate,” Taylor said.

Gonzales agreed with Kondik that Kelly is “on track to have the resources that he needs and the money that he needs to get his message out,” but that he may need it if the campaign proves to be as challenging for Democrats as many expect.

“This is a race to get the most votes and not a race to raise the most money,” Gonzales said.