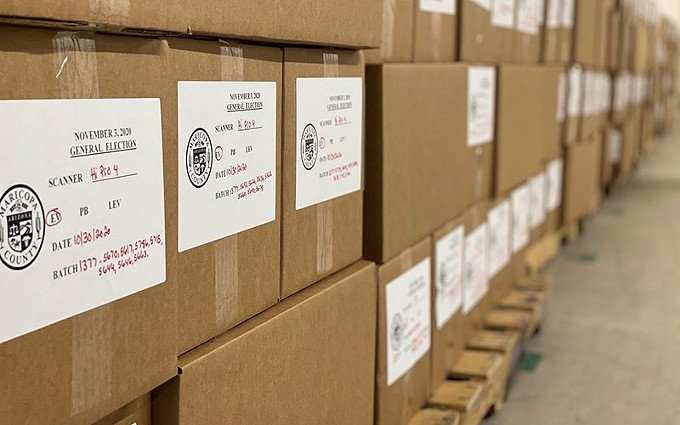 
WASHINGTON —The congressional committee investigating the Jan. 6 attack on the U.S. Capitol subpoenaed on Friday 14 people from seven states who participated as fake electors following the 2020 presidential election.

The groups had met in December 2020 to sign documents assigning their respective states’ Electoral College votes to former President Donald Trump — though their states actually voted to elect Joe Biden as president.

Various Republicans then urged the Trump administration to use the slates of bogus electors as a reason to block the certification of the election during a joint session of Congress on Jan. 6, 2021.

The Select Committee to Investigate the January 6th Attack on the United States Capitol has subpoenaed the chairperson and secretary of each of the groups from the seven states.

“The Select Committee is seeking information about attempts in multiple states to overturn the results of the 2020 election, including the planning and coordination of efforts to send false slates of electors to the National Archives,” Chairman Bennie G. Thompson, a Mississippi Democrat, said in a statement.

“We believe the individuals we have subpoenaed today have information about how these so-called alternate electors met and who was behind that scheme.”

Cottle and Pellegrino did not respond to requests for comment from the Arizona Mirror.

The subpoenas ask the individuals to provide before Feb. 11 various documents regarding their role in selecting the “alternate” electors and to appear for depositions before the committee at different dates in February.

The subpoenas are part of the Jan. 6 select committee’s ongoing investigation into the attack on the Capitol building that temporarily delayed the certification of the presidential election after rioters attacked and entered the building.

The panel has subpoenaed several high-ranking Trump administration officials, and the House of Representatives held former White House Chief of Staff Mark Meadows and aide Steve Bannon in contempt of Congress for refusing to cooperate with those subpoenas.

The committee has requested information from House Minority Leader Kevin McCarthy, a California Republican whose refusal to cooperate has led to discussions about whether the panel should subpoena him as well.

The select committee’s letters to the “alternate electors” said its members were not seeking information about political views or activities in the 2020 presidential campaign, but information about their “role and participation in the purported slate of electors casting votes for Donald Trump and, to the extent relevant, your role in the events of January 6, 2021.”

So far, the Justice Department has charged more than 725 people with crimes from their activities that day, with 165 of those people pleading guilty to a range of federal charges.

The Justice Department is also looking into the activities of the “alternate electors.”

“We are going to follow the facts and the law wherever they lead to address conduct of any kind and at any level that is part of an assault on our democracy,” Monaco said, according to The Guardian.

State officials throughout the country are also looking into potential charges against the individuals who signed the documents that approved false electors for Trump.

Arizona Attorney General Mark Brnovich indicated to KTAR’s The Mike Broomhead Show on Friday that his office isn’t looking into the matter.

Jennifer Shutt covers the nation’s capital as a senior reporter for States Newsroom.

Jacob Fischler and Jeremy Duda contributed to this report. This article originally appeared in the Arizona Mirror, a nonprofit online news agency.

The Daily Agenda: It's Brnovich vs. The World