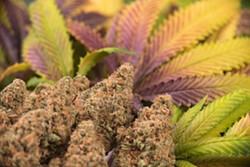 Arizona cannabis sales continued on an upward trajectory in 2021, with the Arizona Department of Revenue reporting more than $1.23 billion in combined cannabis sales through the first 11 months of the year.

In November, adult-use recreational cannabis sales hit a new peak and crossed $60 million for the first time. Medical sales have fluctuated throughout the year, topping out at about $73 million in March and April.

Medical sales eclipsed recreational from February through October — adult-use sales began on Jan. 22 — but in November, those numbers were almost identical, with the medical program bringing in an estimated $60,365,545, while recreational sales reached $60,299,191.

In October, estimated cannabis sales for both programs were within $7 million of each other, the first time recreational sales came within $10 million of medical sales. But the adult-use market is in its infancy and is expected to match the medical program’s economic heft within a few years.

The state collects 16% excise tax on recreational sales in addition to the standard sales tax; medical patients pay a 6% excise tax. Local jurisdictions charge an additional 2% or so for all marijuana sales.

Proposition 207, which voters approved in 2020 to legalize adult use of cannabis, included specific uses for taxes collected on the recreational side. One-third is dedicated to community college and provisional community college districts; 31% to public safety — police, fire departments, fire districts, first responders — 25% to the Arizona Highway User Revenue Fund, and 10% to the justice reinvestment fund, dedicated to providing public health services, counseling, job training and other social services for communities that have been adversely affected and disproportionately impacted by marijuana arrests and criminalization.

High Stakes: Legislative Session Begins With Three MJ Bills Out of the Gate