The Daily Agenda: Education Wars Make It to the Legislature

More Ducey money for COVID-19 school closures ... The election "audit" news is never-ending ... And an unexpected Bruce Willis aside.

As students return to classrooms following the winter break, and lawmakers return to the Capitol following their long summers, education is again at the forefront of the political agenda.

So far, lawmakers have mostly stuck to hot-button topics like requiring written parental permission to join LGBTQ student clubs, picking on trans kids in sports and otherwise, and teaching kids to denounce communism.

We’re still waiting to see a bill that addresses the much bigger issue of the constitutional cap on school spending that’s screwing schools out of $1.2 billion in funding that they already have because enrollment was artificially low last year during the pandemic. Lawmakers need to suspend that cap by March, or schools budgets will be thrown into chaos.

But Republican lawmakers are hesitant to raise or suspend that cap because doing so would undercut their legal arguments against Proposition 208, the 2020 Invest in Education initiative, which increases taxes on high earners to pay for education and is still working its way through the courts.

And while lawmakers are largely focused on sex, communism and sports, Gov. Doug Ducey announced a new “preemptive action” yesterday to pay parents to take their kids elsewhere if schools close.

Ducey set aside $10 million from the federal American Rescue Plan Act to give parents up to $7,000 to cover child care, school transportation, online tutoring and even private school tuition if they meet income requirements and their school or classroom closes “even for one day.”

We’re making sure in-person learning remains an option for all Arizona families and students. That’s why we’re taking preemptive action and launching the Open for Learning Recovery Benefit. 1/

Karamargin emphasized that Ducey has long been a proponent of the public education system. But he couldn’t say if Ducey plans to use his State of the State speech Monday to advocate for increasing the spending cap that has schools worried about future layoffs.It’s a lot like the plan he announced at the beginning of the school year to pay families to change schools if their school requires masks. That proposal also set aside $10 million, or $7,000 per student, and the Governor’s Office told us has doled out $600,000 so far. (For the math-challenged, that’s about 100 kids in a state with more than a million students.)

“Our expectation and our hope is that Arizona schools will remain open to the greatest extent possible. And many of them are sincerely working toward that goal,” Ducey spokesman C.J. Karamargin told us, adding that there’s a broad consensus among educators and politicians, including President Joe Biden, that schools should remain open.

The legislative session starts next week, and the Arizona Agenda be watching and reporting on all the wild and substantial stuff lawmakers do (or don’t do). To come along for the ride, click below to gt the newsletter in your inbox. If you want to keep local independent journalism around, you can pay $8 per month or $80 per year as a paid subscriber.

This will win them over: The Maricopa County Elections Department will release its rebuttal to the Arizona Senate and Cyber Ninjas audit findings today at 1:30 p.m. at a special meeting of the Board of Supervisors. Expect a detailed presentation based on three months of research into the audit’s claims that will change nobody’s mind. You can find meeting information, including how to watch online, here.

Like a brand new penny: The copper dome on the Old Capitol is all shiny and new and ready for a bunch of people to come look at it next week.

New year, new dome! The copper replacement project is complete and the outlook for 2022 is bright and shiny! pic.twitter.com/hd6GWgtYbw

It’s good to be bad: U.S. Rep. Paul Gosar says his censure and removal from committees over a violent anime video actually makes his life easier and is helping him instead of hurting him, KJZZ’s Ben Giles reports. His colleague, U.S. Rep. Debbie Lesko, said the censure probably will help Gosar with fundraising, too.

“If they think that they’re making me not part of the plans, that I’m gonna be obsolete, think again,” Gosar said. “It’s freed me up to do things I’m really good at. That’s talking, that’s communicating.”


Don’t forget what’s underground: While much focus is often spent on the visuals of shrinking surface water levels in Lake Mead and how they affect Arizona’s water supply, the state’s much-harder-to-see groundwater is also being taxed and is in need of protecting, KUNC in Northern Colorado reports.

Orange cones everywhere: It seems like everything is under construction lately. Several big highway projects are underway now, so don’t expect a stop to construction anytime soon. In an op-ed, Arizona Department of Transportation director John Halikowski details some of the biggest upcoming projects, including the widening of Interstate 17.

INBOX: Trump cancels Jan 6 press conference, says he'll discuss what he was going to say at AZ rally instead.

Would watch the movie: There is apparently an international cactus-stealing ring that targeted Arizona, which the feds are now going after. No word yet if it’s tied to the international succulent-poaching ring in California.No questions asked: BASIS schools in Tucson are allowing parents to request exemptions to the Pima County mask mandate, which was reinstated in late December as the omicron wave started hitting the area. The schools told parents they would allow anyone to request exemptions and require no proof to grant such exemptions.

Very cool: Habitat for Humanity built a 3D-printed home in Tempe, which will house a local family. The home is one of the organization’s first to be 3D printed with concrete, KJZZ’s Katherine Davis-Young reports.

Our bad: Several astute readers reached out to note that our redistricting cheat sheet incorrectly identified LD13 as Democratic leaning. It leans Republican.

Today’s bill of the day is a twofer on enforced patriotism from Sen. Wendy Rogers. We know, we know — we’ll get to other people’s bills someday.

Arizona public schools are already required to buy and display American flags (that are manufactured in the U.S.) in every single classroom and outside of each school. But Rogers must have found a classroom without a flag because her Senate Bill 1036 would impose a $1,000 fine on schools for each violation of the law.

And remember last year when the Dallas Mavericks stopped playing the Star Spangled Banner at games for a while and nobody noticed for more than a dozen games, then all hell broke loose and the NBA said all teams must play the tune before games?

No word yet on if sports teams will also be required to chant “Let’s go Brandon” if they play on June 14, which would become President Donald J. Trump Day (but not a legal holiday) under Rogers’ SB1042.

Before Ducey spokesman C.J. Karamargin fought alongside the governor in the War on Ducey, Karamargin feuded with Hollywood actor Bruce Willis in the 1990s in what we’re dubbing the “War on Willis.”

Rachel was trying to escape from Arizona politics a bit by listening to a podcast called Haileywood about how Willis impacted a tiny town in Idaho by moving in, when she heard Karamargin’s name, which isn’t exactly a common one.

It led her down a rabbithole of stories where Karamargin, then a cub reporter at the Wood River Journal in Hailey, Idaho, drew the ire of Willis by breaking stories about the stuff Willis was doing in the town. How dare a reporter write about things happening!

If you Google Karamargin’s name and “Bruce Willis,” you’ll find some choice clips from the time, like one where Karamargin notes that Willis coming to town is a big deal because the town “just got a McDonald’s last year.”

The podcast discusses Willis’ disfavor for the media and the frequent calls the local paper got from Willis’ attorneys about stories they ran. It got so bad, according to one old news clip we found, that Willis withdrew his advertising for his local businesses from the paper based on a story Karamargin wrote.

We’ve asked Karamargin to do an interview about this because it’s just too good, and we’ll make the same plea here: C.J., if you’re reading this, let’s talk about the War on Willis.

The Arizona Agenda is a political newsletter by independent journalists Rachel Leingang and Hank Stephenson. Find more of their reporting on SubStack. 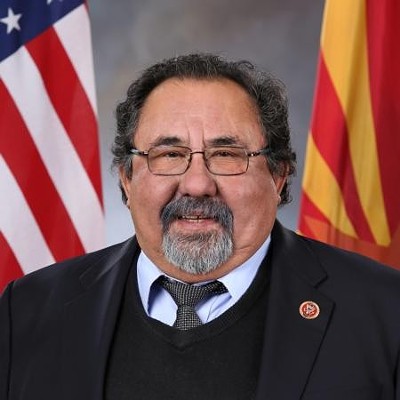 Congressman Raul Grijalva: Jan. 6 Attack on Capitol Was a Calculated Conspiracy to Otherthrow Our Democracy