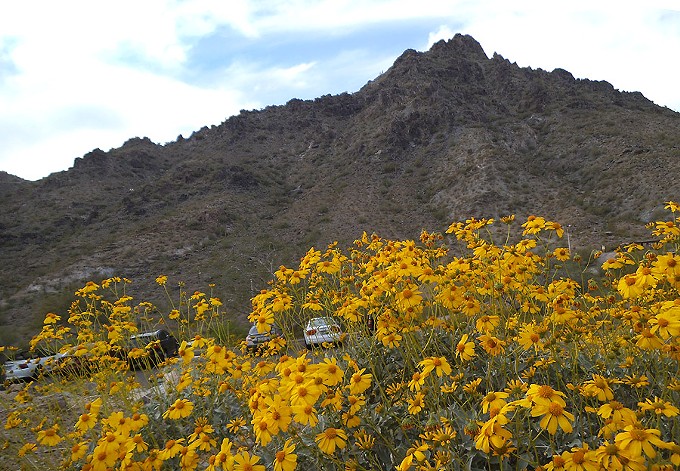 Aznaturalist | Wikimedia/CC BY-SA 3.0
Wildflowers bloom near the base of Piestewa Peak in Phoenix in 2013. The mountain was renamed in 2003 from Squaw Peak because the word “squaw” is a derogatory term. There are still 67 places on federal lands in Arizona that use that term, and all will be renamed because of an order by the U.S. Department of Interior.

Arizona officials and advocates praised U.S. Secretary of the Interior Deb Haaland for declaring “squaw” as a derogatory term and ordering that it be removed from any geographic feature on federal lands, which will rename 67 locations in Arizona.

“The removal of such language is bittersweet as it addresses an everyday indignity that Native Americans are continuously subjected to, but also highlights the deeply-rooted anti-Native sentiments that our country was founded on and for which our government is yet to atone,” Pima County Recorder Gabriella Cázares-Kelly said.

Cázares-Kelly is a citizen of the Tohono O’odham Nation and the first Native American to hold a countywide seat in Pima County.

The move comes at a time when many federal leaders are finally acknowledging the Missing and Murdered Indigenous Women epidemic, Cázares-Kelly said. According to the National Institute of Justice, 84% of Indigenous women experience violence in their lifetime, compared to 71% of white women.

“Racist terms have no place in our vernacular or on our federal lands. Our nation’s lands and waters should be places to celebrate the outdoors and our shared cultural heritage – not to perpetuate the legacies of oppression,” Haaland said in a press release.

As part of Haaland’s order, the Board of Geographic Names – the federal body tasked with naming geographic places – will need to implement procedures that will remove the term from federal usage.

According to the Department of the Interior, the Board of Geographic Names was designed to act on a case-by-case basis where it identifies the offensive name and suggest a replacement.

The process to secure review and approvals can be lengthy, often taking years to complete a name change, according to the Department of Interior, and there are currently hundreds of name changes pending before the board.

“Today’s actions will accelerate an important process to reconcile derogatory place names and mark a significant step in honoring the ancestors who have stewarded our lands since time immemorial,” Haaland said.

Haaland issued two secretarial orders, one that formally identifies the term “squaw” as derogatory and the other to create a federal task force to find replacement names for geographic features on federal lands bearing the term.

The orders will accelerate the process by which derogatory names are identified and replaced, according to the Department of Interior.

There are currently more than 660 federal land units that contain the term, according to a database maintained by the Board on Geographic Names. Sixty-seven are in the state of Arizona that are tied to various geographic features like summits, valleys, streams and reservoirs.

There are several states that have passed legislation prohibiting the use of the word “squaw” in place names, including Montana, Oregon, Maine and Minnesota.

“The word is highly offensive and not used by Indigenous peoples,” said Sen. Victoria Steele, a Tucson Democrat who’s a member of the Seneca Nation, said. “One of the earliest known uses of the word was by the European colonists, who wielded it as a derogatory term referring to Indigenous women.”

Steele was shocked to learn that 67 places in Arizona use that term, and in the upcoming session, she intends to introduce legislation that will strip that slur from names of all state-owned properties.

“It’s a slur that is not only racist but misogynist and it’s been used for hundreds of years to insult and degrade Indigenous women,” Steele added. “The continuing use of this derogatory term as a way of naming our public lands and spaces is an ongoing reminder of our country’s shameful racist history. It simply perpetuates the disgusting notion that Indigenous women are dirty, barbaric, sexual objects, and it needs to stop.”

As part of the order, a Derogatory Geographic Names Task Force will be established and it will include 13 representatives selected by Haaland from federal land management agencies, as well as diversity, equity and inclusion experts from the department.

The task force must be established no more than 30 days after the order was issued and they are required to engage in tribal consultation and consider public feedback on proposed name changes.

The order also calls for the development of a federal advisory committee, which will solicit, review and recommend changes to other derogatory geographic and federal land unit names.

The committee will be known as the Advisory Committee on Reconciliation in Place Names, and it will include representation from tribal nations, tribal and Native Hawaiian organizations, civil rights, anthropology and history experts, and members of the general public.

The committee will develop a process to assist with proposals to change derogatory names, according to the Department of Interior, as well as include engagement with tribes, state and local governments and the public.

In various Indigenous communities, practices can be found that often celebrate the transition Indigenous girls go through into adulthood, Nez-Manuel said, and many have ceremonies that help shape their minds and ideas as young Indigenous women.

This is why, when the term “squaw” is used to represent Indigenous women, Nez-Manuel said that “it really works against the mindset of what we’re trying to teach our young people.”

There’s a serious misperception among non-Indigenous people that these terms are a tribute to them, when in fact they’re far from it. They’re the opposite, according to Nez-Manuel.

“As a society of Native Americans, we’re working so hard to shape women, young women into strong young people and this image that they’ll carry to last a lifetime. And when these words continue to be used, they continue to be used in a way that only creates damage to one’s mindset.

With 67 locations in Arizona, Nez-Manuel said that it’s long overdue to change these names, and Haaland’s action presents that opportunity for change.

“It just gives us an opportunity to have very open, meaningful conversations and to create change,” she added.

When Matthew Yatsayte, 25, who is part of Morning Star Youth Leaders, learned that there were 67 locations in Arizona, he was shocked. He thought Piestewa Peak was the only geographic feature that once had that name, which was renamed in 2003.

“We’re finally addressing these issues and we get to rename these spaces,” he said.

He likes Haaland’s order because growing up in the Navajo Nation, he was taught by his mom and aunts that saying that term was never OK and if he ever did say it they would get mad at him.

This is why he’s happy to see that someone as high up as Haaland is addressing that issue.

“I like that we’re doing this, even though it’s just on federal lands it still creates that pressure for states and others to get on that name change,” he said.

He hopes that when it does come to renaming the geographic features, they’ll consider talking with local Indigenous communities about it.

Members of the Arizona State Board on Geographic and Historic Names were contacted for this story, but no responses were received. 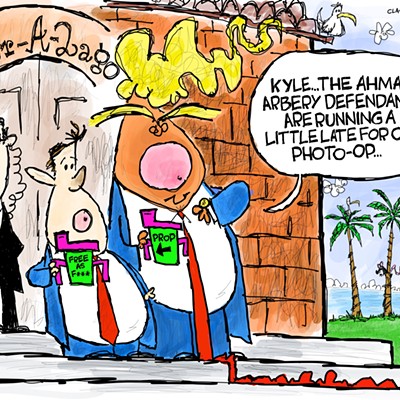 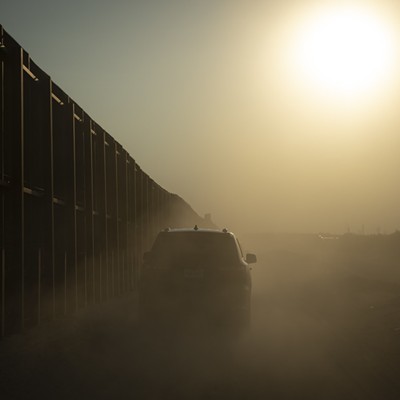