The stage is set for the final debate before the Arizona Independent Redistricting Commission approves its draft maps and submits them for public review after Democratic Commissioner Shereen Lerner suggested a handful of changes she’d like to see to a set of proposed legislative districts in southern Arizona.

Based on those changes and others proposed by Lerner’s colleagues, the AIRC will have three potential legislative maps to consider on Thursday. Independent Chairwoman Erika Neuberg said she wants the commission to approve both the congressional and legislative draft maps on Thursday, a milestone in the redistricting process that will open the maps for 30 days of public comment. After that, the commission will make additional adjustments and then approve the final districts that Arizona will use for the next decade.

At the end of their last meeting on Oct. 21, tensions flared among the commissioners over a map of seven legislative districts that the Southern Arizona Leadership Conference, a Tucson-based business advocacy group, advocated for.

The AIRC incorporated the districts supported by SALC, of which Republican Commissioner David Mehl is a founding member, into its legislative map. A majority of the commission was pleased enough with the result to suggest a final vote on the legislative draft map. However, that didn’t sit well with Lerner, who raised concerns with several of the districts. Neuberg decided to postpone the vote for a week so the commissioners, Lerner in particular, could propose changes.

On Tuesday, Lerner proposed a number of revisions that she said would improve the map while keeping Marana and Oro Valley together in the same district, which is a high priority for Mehl.

Lerner objected to the way District 17 on the SALC-supported map joined the area north of Tucson with the city’s east side, with the two regions completely separated by the Santa Catalina Mountains. She told the commission that it would take an hour with no traffic for someone to travel between the two parts of the district, and would require candidates to pass through another district to get from one end to the other.

Instead, Lerner proposed that District 17 take in the Catalina Foothills and Casas Adobes, while giving the Tanque Verde area in eastern Tucson to neighboring District 18. Meanwhile, District 17 would give Vail and Rincon Valley to Cochise County-based District 19.

“This change will connect all of the population in LD17. These communities are contiguous. They’re neighbors to each other,” Lerner said. “And it will be a very competitive district, as well.”

Lerner said she’d also like to separate the Flowing Wells region of western Tucson from District 16, a primarily Pinal County-based district, and move it into neighboring District 20, which covers much of western and southern Tucson. District 19 would lose Davis-Monthan Air Force Base and the area surrounding it to District 21, which runs from southern Tucson to Nogales.

In addition, Lerner suggested moving Coolidge from the southern end of District 7, a sprawling, rural district that runs from the south side of Flagstaff to eastern Pinal County, into District 17, though the AIRC’s mapping team said it moving it to District 16 instead would help even out the population of that district. 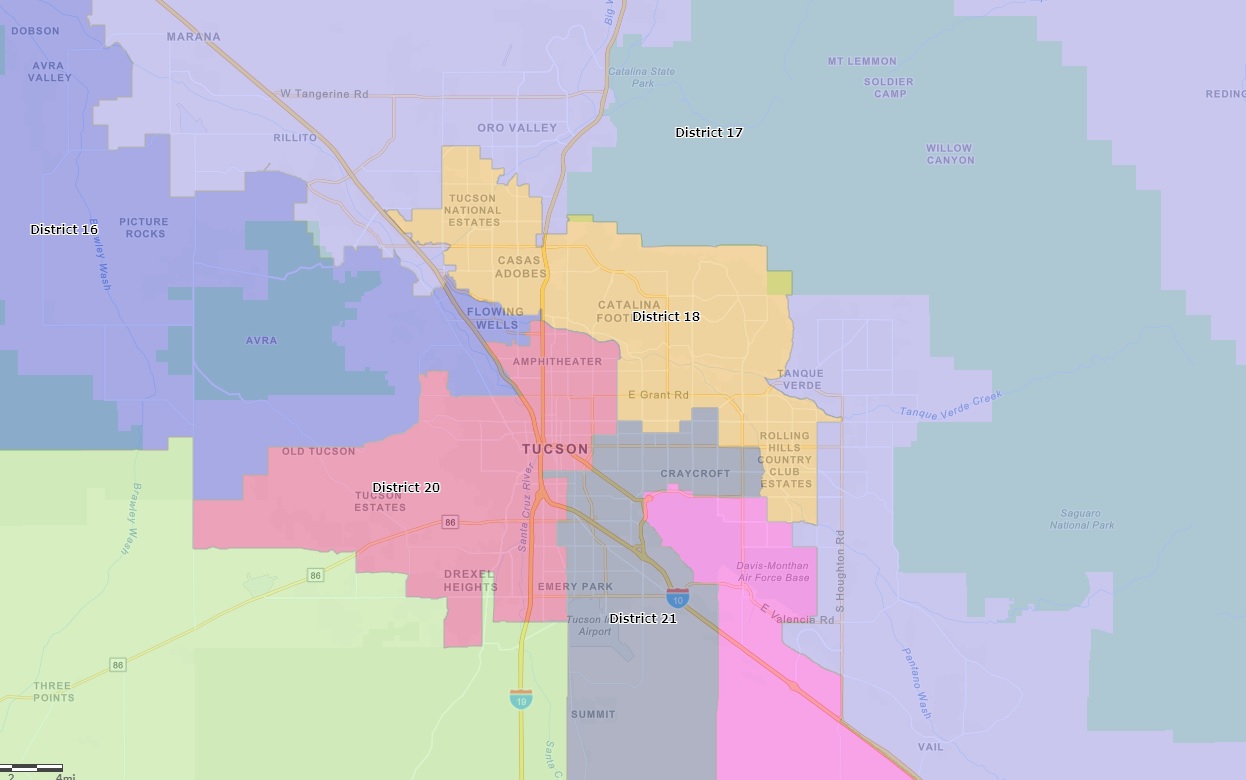 Mehl countered with several proposed revisions of his own that would keep the disputed District 17 largely intact.

He supported Lerner’s ideas of moving Flowing Wells into a neighboring district, swapping it for a region of the southwestern Tucson area. And he was amenable to her idea of moving the Pinal County communities of Mammoth, Oracle and San Manuel out of District 7 and back into District 17, joining it with part of the Tucson area.

In addition, Mehl proposed extending District 17 to Red Rock and surrounding areas of southern Pinal County, and having Cochise-based District 19 give up the Air Force base in exchange for taking in eastern Santa Cruz County, along with Amado, Tubac and the retirement community of Quail Creek.

Neuberg warned the other commissioners against proposing changes that would substantially alter the maps, particularly after Lerner said she’d like to see some changes to two districts in the Phoenix area, though she said she had some revisions she may want to consider in Maricopa County.

“The one concern I have is I hope we’re not going to arrive on Thursday morning with two dramatically different maps than anything we started from that are so different from one another,” she said. “Just be cognizant of that, colleagues.”

Shortly before the meeting began, the commission received a letter from Tucson Mayor Regina Romero, who also wanted to see changes to the congressional map.

She also proposed moving part of southern Tucson into the 7th District to join it with other predominantly Latino areas to ensure that the district complies with the Voting Rights Act.

Correction: A previous version of this story said a map of proposed legislative districts for the Tucson area was drawn and submitted by the Southern Arizona Leadership Council. SALC supported the proposal but did not draw or submit it to the Arizona Independent Redistricting Commission.