PHOENIX – The mistrust in Arizona’s Nov. 3 presidential election and the months-long audit it spawned is quickly spreading across the country, with politically driven efforts in Wisconsin, Pennsylvania, Florida, Michigan and Texas, the executive director of Secure Democracy said Wednesday.

Secure Democracy, a nonpartisan, nonprofit organization whose stated mission is to improve U.S. election integrity, held a virtual press conference the day after the Arizona Supreme Court ordered that all audit documents be made public. Maricopa County Recorder Stephen Richer provided further insight into the audit process and Cyber Ninjas, the Florida company the state Senate hired to run the “forensic audit” of more than 2 million ballots.

“Twenty-five state legislatures have introduced legislation allowing the legislature and other partisan actors to exert greater control over the conduct of elections,” said Sarah Walker of Secure Democracy. “The threat of financial or criminal sanctions will certainly and likely deter local officials from taking necessary actions to ensure voter freedom and ensure that voters have sufficient access in our democratic process.”

The Arizona audit has captured the attention of former President Donald Trump and his allies, who – despite any proof – continue to claim the Nov. 3 election was stolen from him.

This is the third audit of Maricopa County votes. Although the first two found no issue with the total vote count, the state Senate insisted on conducting another.

Walker said Secure Democracy will continue to work with state-level allies to stop election subversion efforts across the country, which she said are wildly unpopular with voters.

“Republicans, Democrats and Independents are unified in opposing attempts to overturn election results,” Walker said. “However, they do support measures that would address honest collection systems and ensure that the systems are accountable to voters and not to the politicians.”

Also at the news conference was former Kentucky Secretary of State Trey Grayson, who said that before the 2020 presidential election, voters didn’t pay much attention to election audits and the process of counting votes.

“We saw this happen after the 2000 election in Florida where a lot of people don’t really pay close attention to policymakers and others,” he said. “We needed to make changes and the country would pass legislation to try to prevent that from happening again, so that’s one thing I think local officials can do is to show them the process.”

This webinar follows Tuesday’s Supreme Court’s ruling that the Republican-controlled Senate and Cyber Ninjas, the company hired by Senate President Karen Fann to conduct the audit, must release all documentation concerning their work.

Richer, a Republican, said Cyber Ninjas had no previous experience auditing elections before last March, and that many election professionals had never heard of them until they came to Arizona.

Cyber Ninjas did not immediately respond to a request for comment.

Richer said the Cyber Ninjas recruited almost entirely Republicans, some of whom were on the November ballot; have not been transparent in their audit process while only allowing limited media access; and have been led by people who contend Joe Biden’s presidency is illegitimate.

The Ninja audit has so far only served to defame good people and further erode confidence in our elections,” Richer said. “I can’t tell you the number of people on my staff who have been targeted, who have been denigrated,who have been harassed. This has a real human cost.”

Cyber Ninjas was recruited in March by the Arizona Senate to audit Maricopa County’s 2020 presidential election ballots, but the company has refused to release documentation or provide insight on how it conducted the audit or who paid for it.

“The Ninjas have made a whole series of claims that have later been brought back with only an ‘oops’ but never an apology,” Richer said. “This is what happens when you no longer believe in professionals.”

Richer said for future elections, the plan is to continue being transparent while inviting the public to be a part of the process.”

“One good thing that has come out of all this brouhaha is there seems to be a lot of interest in elections,” Richer said. “Hopefully we can get more people involved in the process.” 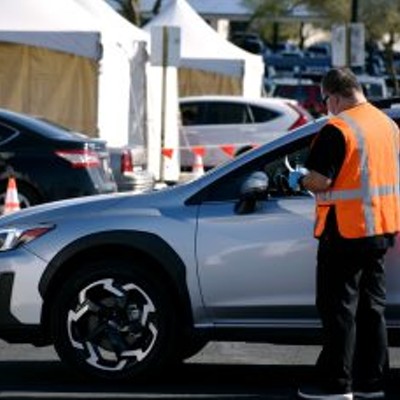