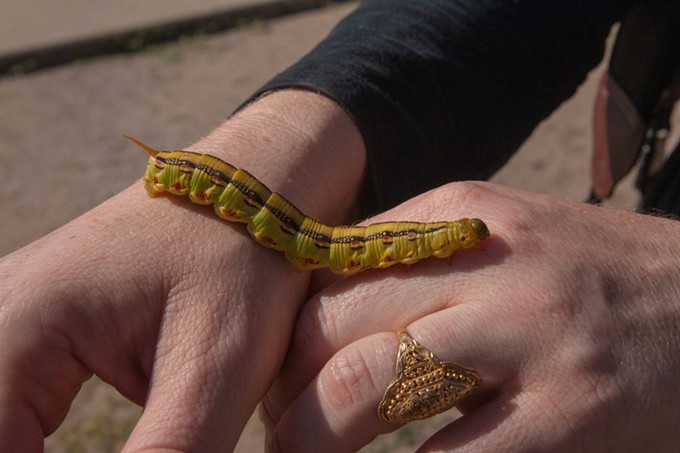 MESA — Kelsey Shaw and her two children pick up large yellow and green caterpillars just off the Bush Highway near Saguaro Lake. The children have no hesitation handling these nearly 2- to 3-inch-long caterpillars, letting them crawl all over their clothes.

Shaw and her children were preparing to spend the morning picking up litter along the Salt River when they spotted the dozens of caterpillars in one of the parking lots in recreational areas of the Tonto National Forest. Although some people cringe at the sight of crawly things, Shaw and her children do not.

“We love the caterpillars,” Shaw said, “it’s just been stressful when we’re driving because they (her kids) get really upset about running them over. We don’t want to hurt them.

“I know some people are absolutely freaking out.”

Drive along the Bush Highway and you can’t miss tens of thousands of these caterpillars frantically wriggling to cross as vehicles fly by. They don’t all make it to the other side – many become yellow splotches on the black asphalt.

The caterpillars are on a mission to eat as much as they can before becoming white-lined sphinx moths (Hyles lineata), which are found across most of North America. They are hawk moths, which are among the largest in the world, and they’re “fast flyers and often highly aerobatic,” according to the U.S. Fish and Wildlife Service.

Not only are the caterpillars abundant on roadways, they’re showing up in swimming pools and gardens, and on walls and hiking trails.

Shaw said the timing of her family’s recent outing to pick up litter was excellent.

“We actually homeschool,” she said, “and in our curriculum, we were learning about butterflies and moths this week. It was perfect.”

In Arizona, monsoon storms stimulate the growth of weeds and other plants, essential food in the caterpillar’s development. There are more caterpillars than in years past because of the increased rainfall this monsoon season.

The white-lined sphinx moth caterpillars are in their “wandering phase,” which takes place right before they burrow underground to pupate, according to Sarah Britton, a doctoral student in entomology at the University of Arizona. Britton studies the pattern of melanism, or color pigments, in the caterpillars.

She said these caterpillars sometimes can be found at the tops of plants, and even though they’re large, they keep eating.

“Then sometimes you see these ones that are in the road or just wandering across big expanses and people are running over them,” Britton said. “They’re wandering to find their pupation spot.”

Dry years also affect the population of the white-lined sphinx moth, according to entomologists.

Goggy Davidowitz, an entomology professor at UArizona, said the white-lined sphinx moth can handle the unpredictability of Arizona’s weather patterns – with one caveat.

“This species is the most abundant hawk moth (Sphingid family in the animal order that includes moths) in all of North America,” Davidowitz said. “But the highest abundance (is) in the Southwest, they have evolved into semi-arid environments.”

Davidowitz, who lives in Tucson, said the rains there can be unpredictable.

“So, when there is a good rain season, they (caterpillars) capitalize on that and they’re very prolific and they’ll put in multiple generations. If it’s a bad year, they won’t.”

Davidowitz, who spends some of his time researching the white-lined sphinx moth, said the number of moths and caterpillars in Arizona has fallen in the past 15 to 20 years.

“Last year, we found when we went out black-lighting, it was a drought year, we got almost no hawk moths at all,” he said.

Diminished rainfall and rising temperatures from climate change affects this species’ ability to thrive in Arizona. Since the 1970s, the average temperature has increased more than 3 degrees in Arizona, which is the third fastest-warming state in the country, according to Climate Central.

“They can deal with some unpredictability as a species but they still need some monsoons to thrive,” Britton said. “Last year, for example, we didn’t see this many. If it’s years and years and years of very little rain, that’s a big factor, in addition to the temperature.”

The white-lined sphinx moth plays a role in pollinating plants in Arizona. This species is considered a “generalist,” meaning it doesn’t have a certain type of plant it consumes or pollinates, Britton and Davidowitz said.

“Another cool thing about this species is all hawk moths are nocturnal, so they fly at night. They will pollinate with both night blooming flowers and day blooming flowers,” Davidowitz said.

White-lined sphinx moths often are mistaken for hummingbirds because they resemble the birds and can hover to feed from and pollinate flowers. Their long proboscises are similar to a hummingbird’s beak.

For now, watch out for these harmless caterpillars around Arizona as they get ready to head underground to reemerge as moths in about three weeks.

Claytoonz: How You Doin'? 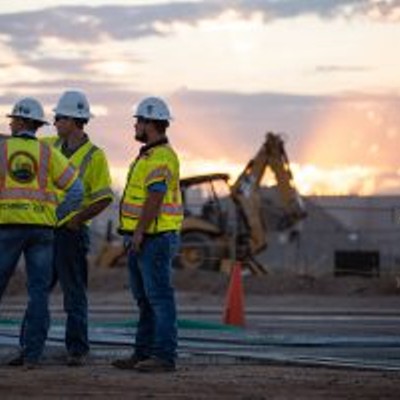