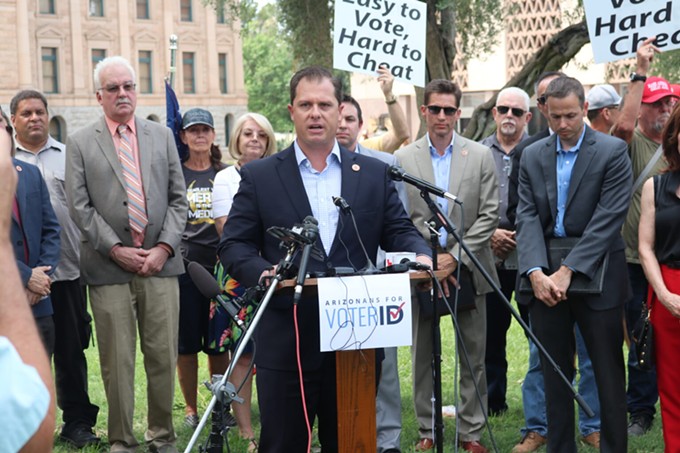 Jeremy Duda, Arizona Mirror
Rep. Jake Hoffman, R-Queen Creek, speaks in support of the Arizonans for Voter ID Act during a press conference outside the Arizona Senate on Aug. 17, 2021.

Prompted in part by concerns that voters lack trust in elections after nearly a year of baseless fraud claims promoted by former President Donald Trump and his allies, several Republican lawmakers and a conservative advocacy group want to give voters an opportunity to impose a new identification requirement for early ballots.

The Arizonans for Voter ID Act, as the measure is dubbed, would also augment a state law against third-party ballot collection, often described by critics as “ballot harvesting,” and strengthen laws requiring photo identification to vote in person.

Several Republican lawmakers joined the conservative Arizona Free Enterprise Club, which sponsored the measure, to announce the launch of their campaign on Tuesday afternoon outside the state Senate at a sometimes raucous press conference in which supporters of the measure shouted over reporters and a few others heckled the initiative’s supporters, as well as the press.

Sen. J.D. Mesnard, whose failed legislation to require voter ID on early ballots is now the core provision of the ballot measure, said many people have lost faith in Arizona’s elections system. And regardless of whether people agree with the reasons why, he said, that’s a problem that needs fixing.

“It is undeniable that hundreds of thousands of people have lost faith in the elections. Now, you may agree with them, you may disagree with them. You can blame whomever you want. But by virtue of that many people who are saying, ‘I’m not sure why I should go vote or bother voting because I’m not sure it’s going to be legitimate, I don’t believe the outcome,’ that is an existential threat to democracy. And if you ignore that, if you just dismiss that, that is a form of voter suppression,” said Mesnard, a Chandler Republican.

Sen. Warren Petersen, R-Gilbert, said the proposal mirrors laws in numerous other states, and would still leave Arizona as one of the most accessible states in the U.S. when it comes to early voting, while Rep. Jake Hoffman, R-Queen Creek, said polling shows widespread support among the public, even among a majority of Democrats, for requiring voter ID for all voters.

Unlike people who cast ballots on Election Day, Arizonans who vote early by mail don’t have to show photo identification. (Those who vote early at an in-person early voting location are required to show identification.) Instead, election officials verify the identities of early voters through signatures: Voters must sign their names to their ballot affidavits, and election workers match them against the signatures that are on file for those voters. If the signatures don’t match, election officials attempt to contact the voters to confirm that they were the ones who signed the affidavits.

That would change under the proposed measure. The main provision of the proposed ballot measure would require voters who cast early ballots to confirm their identities with one of several forms of identification. They would be required to include their date of birth along with their driver’s license number, state identification card number, voter identification number or the last four digits of their Social Security number on the affidavit they include with their early ballots.

Voters currently affix their signatures to the outside of the envelope they use to submit their early ballots. The proposed ballot measure would require that voters put the affidavits into a separate envelope to protect the confidentiality of their information.

Non-operating identification cards — state ID cards that don’t entitle someone to drive a vehicle — normally cost $12, but the measure would make them free for anyone who attests that they’re getting the ID card so they can vote.

If election workers cannot verify a voter’s voter identification or date of birth, they must allow voters to correct the problem for a “curing” period of up to five days after the election, similar to what pre-existing law requires for signatures that can’t be verified.

The new voter ID requirement would largely mirror Senate Bill 1713, a bill that Mesnard sponsored during the 2021 legislative session. That bill passed the Senate but fell short in the House, where two Republican lawmakers joined with Democrats in voting against it.

The proposal would make other changes to election laws, as well.

One provision would change the voter identification requirements for people who cast ballots in person. Voters must currently show either a photo ID or two documents that include their names and addresses, such as bank statements, utility bills, vehicle registration, property tax statement or tribal enrollment card. Under the proposed act, voters would be required to show a photo ID in all cases, and if that identification has an out-of-date address, they must show another document that includes the address in the voter registration records.

The proposed ballot initiative would also strengthen the state’s ban on third-party ballot collection, pejoratively referred to by critics as “ballot harvesting.” State law prohibits people from collecting and turning in other voters’ ballots, with the exception of family members, caregivers or other members of a voter’s household. The proposal would require anyone who submits another person’s ballot under those exemptions to show identification. Election officials must reject ballots submitted by someone who doesn’t show ID.

Scot Mussi, president of the Arizona Free Enterprise Club, said the provision was intended to strengthen enforcement of the current law. But it’s unclear how that requirement would be enforced.

Most early ballots that are delivered to polling places are from voters who are casting their own ballots, and election workers would have no way of knowing whether a person was dropping off their own ballot, as opposed to someone else’s, without questioning everyone who comes into a polling place with an early ballot. Mussi said it would be clear that someone had someone else’s ballot if they brought in multiple ballots, which he suggested would be election officials’ primary focus in enforcing the new ID requirement.

Hoffman and Mussi said it would be up to county election officials to determine how to enforce the law.

Despite the insistence of the proposal’s supporters to the contrary, Democratic critics said the act would clearly make it more difficult for people to vote.

Adrian Fontes, a former Maricopa County recorder who is now seeking the Democratic nomination in the race for secretary of state, said the proposed law would make it more difficult for elderly voters, as well many others who vote early.

“These guys are just promoting the Big Lie with this nonsense, and I trust that Arizona voters won’t fall for their garbage conspiracies,” Fontes said, referring to the term that many critics use for the false and baseless claims that the 2020 election was rigged against former President Donald Trump.

Fontes also questioned how the ID requirement for people who submit other voters’ early ballots would be enforced.

House Minority Leader Reginald Bolding, who is also running in the Democratic primary for secretary of state, was equally concerned that the voter ID requirement would make it more difficult for Arizonans to vote early, particularly elderly people, minorities and low-income voters. He said SB1713 was “too aggressive” for the Republican-led legislature, and predicted that voters will reject this proposal if it makes it to the November 2022 ballot.

“When you have those types of measures, it’s not about the ID anymore. It’s about, how do you create an additional barrier for people’s votes to actually count?” said Bolding, a Phoenix Democrat.

Citizen initiatives in Arizona are largely the domain of Democrats, who usually have no other way to enact liberal policies after decades in the minority at the state Capitol. But the GOP currently has only a one-vote majority in each legislative chamber, which made it difficult during the last session to pass some conservative proposals, including Mesnard’s voter ID bill.

The campaign must collect at least 237,645 valid signatures from Arizona voters by July 22, 2022, to refer the measure to the ballot for next year’s general election.

Mussi said the campaign will begin collecting signatures in the near future using grassroots volunteers. The campaign will hire paid petition circulators later on if needed — it’s extremely rare that a successful signature campaign succeeds without them — though he didn’t have a timeline for when that might happen. He also wouldn’t comment on what kind of financial commitment Arizona Free Enterprise Club might make to the campaign, or whether other organizations or donors will help fund it.

The campaign may not need to collect signatures at all if they can convince GOP lawmakers to refer the measure to the ballot instead, which can be done with a simple majority in each legislative chamber. Mussi said the campaign would like to see the legislature focus on election integrity, but that’s ultimately up to the lawmakers themselves, and that the campaign will focus on the ballot measure.

While SB1713 fell short in the legislature, the GOP lawmakers leading the campaign emphasized that there are differences between that bill and the new ballot measure. Hoffman suggested that the legislature could end up referring the proposed act to the ballot.

“This is a brand new initiative. So, this is something that the legislators are certainly going to be weighing the merits of. And I look forward to seeing the support that we do have,” Hoffman said.

Nonetheless, the core provision of the bill is very similar to SB1713, which Republican Reps. Joel John and Michelle Udall voted against. And Arizona Capitol Times reporter Julia Shumway wrote on Twitter that House Speaker Rusty Bowers, who voted for Mesnard’s bill during the legislative session, opposes the new ballot measure.

Claytoonz: Yee-Haw On The Grid