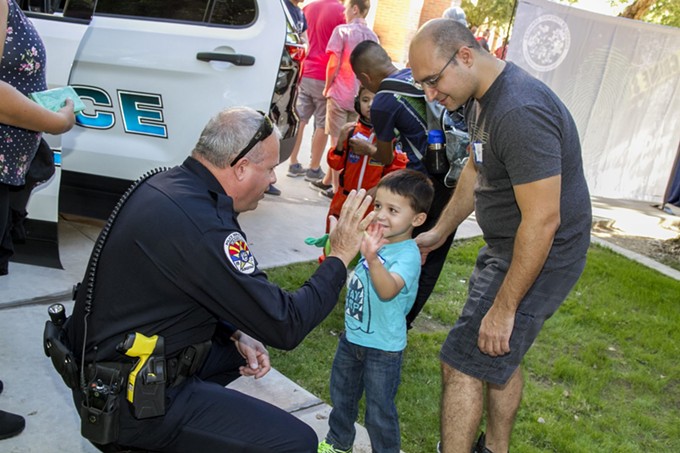 Chandler Police Department
Chandler police have increased training around interactions with people who have intellectual or developmental disabilities through such events as Pizza With a Cop in 2019.

PHOENIX – Cynthia Macluskie has memories of her 3-year-old son sneaking out of their Cave Creek home late at night, while she was asleep.

“At 6 o’clock in the morning, someone’s banging on my door. … I still get goosebumps from this,” she said, looking down at her arm during an interview.

A couple who’d woken up early for work found her son, Mark, and the Macluskies’ dog playing near a ravine, and the family’s address was on the dog’s collar.

That was more than 20 years ago. But Macluskie, vice president of the Autism Society of Greater Phoenix, said she knows other families might not be as lucky as she was that night when a loved one with a disability goes missing.

Mark was engaging in a behavior that’s common among youngsters on the autism spectrum: wandering or elopement – a tendency to run off from a safe area or caregiver. Research shows it’s common in about half of youth on the spectrum; 1 in 4 children are missing long enough to cause concern and are most in danger of drowning or traffic injuries.

“I think that happens more than we hear reported because people are embarrassed. They don’t want to admit that it happened,” said Macluskie, who shares her story as a cautionary tale. “That took a lot of ingenuity for him to get out of our house. He was pretty fast and pretty smart about it.”

In 2018, after lobbying from Macluskie and others in the autism community, Arizona took a step to help address the problem.

The Arizona Legislature expanded the criteria for the state’s Silver Alert public notification system to include those with intellectual or developmental disabilities. It was previously intended for missing seniors with Alzheimer’s disease or dementia.

Municipal police departments are able to request a Silver Alert from the Arizona Department of Public Safety after they’ve exhausted all available resources, such as distributing missing person flyers, contacting family and friends, and checking area hospitals and jails.

Similar to the way an Amber Alert notifies the public about child abductions, Silver Alerts allow DPS to reach more people via phone notifications, broadcast alerts on TV and radio, and highway signs.

Three years after the program was expanded, Macluskie and other advocates say they’re confident the change was worth it.

“It’s certainly not uncommon for people to wander from one community to the next,” Meyers said. “If there’s no coordinated law enforcement system, it can be very difficult to make sure that everybody’s talking to one another.”

Other states have started to create similar systems. Last summer, Alabama expanded and changed the name of its senior alert system to include adults 18 or older with mental or physical disabilities, and Illinois expanded its state alert system in a similar way in 2019.

At the national level, a 2018 law authorized the U.S. attorney general to establish a national alert network for missing adults 18 to 64 to address situations not covered by Amber or Silver alerts. The criteria includes those with special needs or intellectual disabilities.

A dearth of data

Overall, the number of people safely recovered after a Silver Alert in Arizona increased from 60 in 2015 to 131 in 2020, said Chrystal Moore, alert coordinator for the state Department of Public Safety.

But it’s impossible to know exactly how often Silver Alerts are used for those with disabilities. The state doesn’t track data specifying the age or reason for an alert, and collecting statistics is not a requirement of the statute that updated the alert system, Moore said. Only anecdotal information is available from missing person bulletins on the DPS website.

Meyers said his group was aware of about a dozen instances in the first years of the law where somebody with an intellectual or developmental disability was found and returned home safely.

“We consider that to be a sign of success,” he said.

Chandler police Sgt. Jason McClimans said his department is getting more cases warranting a Silver Alert, in part because of the expanded criteria.

In 2019, the department requested a Silver Alert for a 17-year-old with autism, and found him within 48 hours near Cooper Road and Loop 202. Another Silver Alert was issued last summer for a 13-year-old with a developmental disability. After information about the teen was shared on social media, he was spotted the next day riding the light rail between Phoenix and Tempe.

“I would say once every two weeks, we get a call referencing a Silver Alert,” either for older individuals or those with a disability, McClimans said. “Sometimes, prior to activating the Silver Alert, the individual will be found, but … probably 50% of the time … it may take 12 to 24 hours before that individual is located.”

Macluskie, of the Autism Society, said the system is vital for local police departments because it provides access to state and federal resources “and a lot of technology that’s not normally available for someone who’s missing.”

“For instance, if you have a Silver Alert, you can use Reverse 911 to the neighborhood where the child’s missing,” she said. “That’s been crucial.”

Reverse 911s allow police or fire departments to send voice messages about an emergency to phones in a particular geographic location.

Despite the successes with the system, Macluskie said she worries that some families and police departments still may not know that a Silver Alert can be issued for those with disabilities.

“There are rural areas where they may not know about this additional resource.”

Meyers said autism groups in Arizona are working to educate individuals, their families and law enforcement officials about encounters with police, including situations where officers find a missing person from a Silver Alert.

“Individuals with intellectual or developmental disabilities often have difficulty understanding social cues, interacting with strangers. … They are, in many, many cases, very uncomfortable with things that are not familiar to them,” he said.

“First responders have to be aware that when they come into contact with these individuals, they’re likely to get a response of fear, a response that may include them striking out or acting in ways that can be perceived as threatening.”

About 1 in 5 adolescents on the autism spectrum will be stopped and questioned by police before age 21, according to the A.J. Drexel Autism Institute at Drexel University in Philadelphia.

Data about police use of force on civilians with developmental disabilities, much like long-term data on Silver Alert recoveries, is limited, the Autistic Self Advocacy Network reports. Some databases on use of force, such as The Washington Post’s police shootings site, track whether victims had mental illnesses, but there’s little information about cognitive or developmental disabilities among victims.

Training programs like “Be Safe” aim to improve relationships between police departments and people with developmental disabilities by hosting interactive screenings. The California-founded program, which has been adopted by police departments throughout Arizona, teaches officers about some common characteristics of autism and facilitates events at which people on the spectrum meet one-on-one with police to learn safety skills.

Some towns also have registries, such as Chandler’s Return Me Safe service, where caretakers can share information about an individual’s disability with a police department before a potential emergency call.

McClimans, of the Chandler Police Department, said it’s a myth that friends and family need to wait 24 hours to report a person missing. There is no waiting period.

And in cases involving a person with special needs that lead to Silver Alerts, the ability to act fast and seek additional resources can be life-saving.