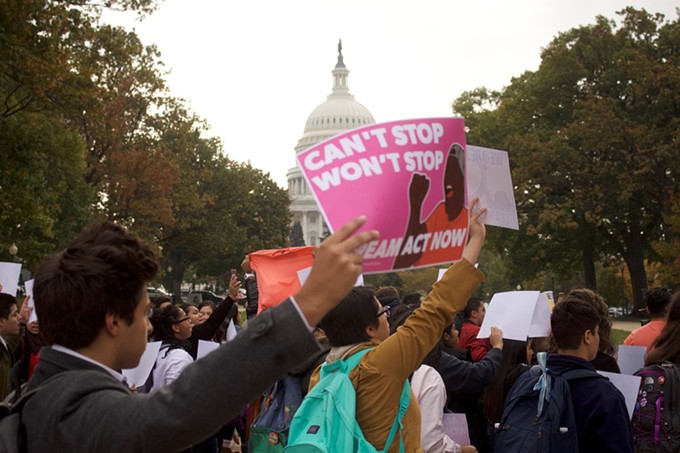 WASHINGTON – A federal judge’s ruling that the Deferred Action for Childhood Arrivals program is unlawful should have no practical impact on more than 600,000 covered immigrants for now – but it is sure to have an emotional impact, advocates say.

“I think it’s the mental toll,” said José Patiño, a DACA recipient and director of education and external affairs at Aliento. “It makes it really difficult to continue moving forward.”

The July 16 ruling by U.S. District Judge Andrew Hanen in Texas was just the latest in a string of reversals and renewals that have been with DACA since it started in 2012 and have reached as high as the U.S. Supreme Court.

Hanen agreed with Texas and eight other states that the Department of Homeland Security did not have the authority to create the DACA program, which defers deportation of immigrants who were brought to this country illegally as children.

Hanen said DHS could still receive applications for first-time DACA protection, but could not approve them. Acknowledging the “hundreds of thousands of DACA recipients and others who have relied on this program for almost a decade,” however, he said that current recipients could continue to apply for and receive renewals of their DACA protection.

U.S. Citizenship and Immigration Services said on its website that “DHS will continue to accept the filing of both initial and renewal DACA requests,” but that “DHS is prohibited from granting initial DACA requests.”

There were 616,030 DACA recipients nationwide, and 23,010 in Arizona, as of March 31, according to the most recent data from USCIS. Advocates say those recipients once again find themselves wondering about their futures.

Hanen’s ruling “should have no formal effect on current DACA recipients” for now, said Thomas A. Saenz, president and general counsel for the Mexican American Legal Defense and Education Fund. But “clearly, it still has a psychological effect,” Saenz said.

“The fact that this judge has indicated that DACA is unlawful and the continued uncertainty about how long DACA will continue undoubtedly has an effect on recipients,” Saenz said.

By leaving the door open to renewal applications, Patiño said, the ruling “creates a lot of anxiety and a lot of stress.”

“Those who are active DACA recipients, it kind of puts them in limbo that they could eventually go back to being undocumented because the judge said the whole program itself is unlawful,” Patiño said.

As of March 31, there were 55,550 initial requests for DACA protection pending and 44,171 applications for renewals, according to USCIS.

While current recipients might be OK – for the time being – first-time applicants are “going to stay undocumented and that’s difficult,” Patiño said.

“Some of them wanted to get a driver’s license, a work permit, Social Security, and feel like they’re a part of the country and not have to worry,” he said.

DACA was created by the Obama administration in 2012 after Congress repeatedly failed to pass legislation to protect the so-called “Dreamers,” immigrants who were brought to this country as children, raised here and may have known no other home.

Under the program, DHS would agree to defer deportation for two years for immigrants who met several criteria – they were under age 16 when brought here, had lived here for at least five years, were in school or the military, or had a high school diploma or GED. Applicants also had to have clean criminal records and pay a fee with the application.

DACA protection does not grant citizenship but it does protect the recipient from deportation for two years at a time, and is renewable. It also makes it possible for recipients to get work permits, a Social Security number, a driver’s license and some state benefits – to begin living life out of the shadows, advocates said.The Trump administration attempted to kill the program. But that move was ultimately rejected by the Supreme Court, which said the administration failed to follow proper administrative procedure when it said it was ending the program, allowing DACA to continue.

Until the latest court ruling.

“It’s quite clear that Congress needs to act,” Saenz said of the continued reversals of the program. “That’s the only way to resolve the uncertainty.”

That was echoed by President Joe Biden, who called the ruling “deeply disappointing.”

“While the court’s order does not now affect current DACA recipients, this decision nonetheless relegates hundreds of thousands of young immigrants to an uncertain future,” Biden said.

“Only Congress can ensure a permanent solution by granting a path to citizenship for Dreamers that will provide the certainty and stability that these young people need and deserve,” Biden’s statement said. “I have repeatedly called on Congress to pass the American Dream and Promise Act, and I now renew that call with the greatest urgency.”

He said the Justice Department would appeal Hanen’s ruling “in order to preserve and fortify DACA.”

But Patiño worries that the ruling will be upheld, and DACA recipients will again be facing an uncertain future.

“It doesn’t look too well for DACA recipients and it seems like it’s another long fight,” Patiño said.