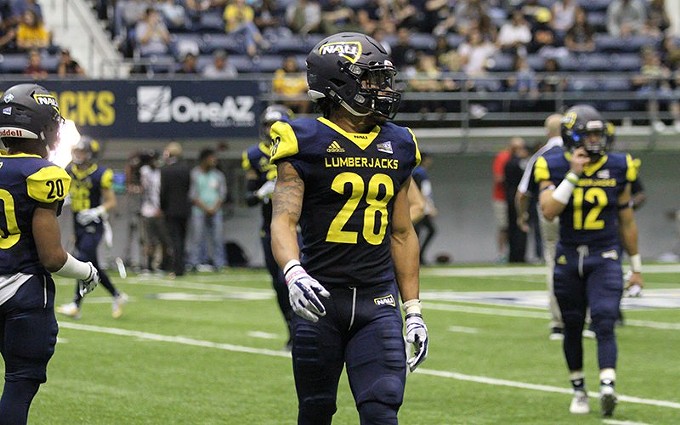 Photo courtesy of Northern Arizona University
Wesley Sutton attended two NFL minicamps after going undrafted. He joined the New York Guardians of the XFL after participating in a combine in Seattle in the summer of 2019.

PHOENIX – The New York Guardians of the XFL, a professional spring football league, began March 2020 with great optimism. The Guardians routed the Dallas Renegades 30-12 on March 7 behind their stifling second-half defense to move to 3-2 on the season. The next week would bring a showdown with the undefeated Houston Roughnecks – or so they thought.

By March 14, the season had already been canceled because of the COVID-19 pandemic.

“Our last meeting was pretty sad, hearts were pretty heavy, just because as guys who are looking for an opportunity,” said Wesley Sutton, who played safety for the Guardians. “(We had) finally found a great opportunity to showcase our talents, and more importantly just be able to play football again on a professional level.”

But the pandemic didn’t mean the end of the road for Sutton, a former standout at Chandler High School and Northern Arizona University. In the following year, he picked up work as a personal trainer, bided his time and soon found a new opportunity to the north. On March 22, 2021, he signed with the Montreal Alouettes of the Canadian Football League.

Sutton isn’t the only Arizonan to pursue professional football up north. His onetime NAU teammate Emmanuel Butler, who attended Mountain Pointe High School, is trying to make it as a wide receiver for the Hamilton Tiger-Cats. To the west, Tucson native and former University of Arizona standout Ka’Deem Carey is ensconced in the Calgary Stampeders’ backfield. In short, as remote as the CFL may seem for American football fans, it continues to provide a viable career path for many aspiring football players and coaches with Arizona ties.

Terrance Vaughn, a member of the Canadian Football Hall of Fame, played his college ball at Arizona. He joined the Calgary Stampeders in 1995 after a brief stint with the Arizona Cardinals and, over the course of a decorated 12-year career, became the first receiver to reach 1,000 catches in the CFL.

“They kind of look for guys that are good, but maybe they might be undersized to play in the NFL, or they might not be a major contributor on an NFL roster,” Vaughn said. “But they could be a starter on a CFL roster.”

Vaughn started in the CFL at the same position he had in college: outside wide receiver. He quickly found that the larger field made it difficult for some quarterbacks to get him the ball.

“You throw a 5-yard or 10-yard out, that’s a 30-yard throw, on a rope, for a quarterback,” he said. “Only big-armed quarterbacks would make that throw.”

Vaughn caught on quickly and won a starting job, which he said was at the one open position Calgary had on the roster. Vaughn noted that his propensity for yards after the catch – he called himself “a running back that played wide receiver” – helped him excel.

For other Americans hoping to make it in the CFL, the adaptation process might be more challenging. Beau Walker, who coached last season at Cesar Chavez High School in south Phoenix, put in significant time to learn the ropes when he joined the Ottawa Redblacks as an assistant coach in 2016. He had previously served as a student assistant at Oregon State University and graduate assistant at the University of Nebraska.

“For me, it was an offseason of really studying and watching a lot of film so that I didn’t get lost in some of the motion, and kind of the chaos that you see within the Canadian game,” he said.
“Organized chaos, I should say.”

Canadian football has a larger field, an extra man on each side of the ball, more motion before the snap and only three downs instead of four. Walker said this makes the game fascinating.

“There’s really a beauty to the game, just with the motion and the longer field and the big plays and the high scores … players are attracted to that, they kind of like that,” he said. “Just because it’s high-paced, it’s like watching basketball on grass.”

Jerome Souers, currently the defensive coordinator at Southern Oregon University, called the CFL a “great niche” for players who haven’t received as much scouting attention. He previously coached Butler and Sutton at NAU, which plays in the Football Championship Subdivision.

“They’re going to be successful at whatever they choose to do,” Souers said. “The fact that they still are playing the game is indicative of their ability, their talent, their work ethic and their dedication.”

As pro football becomes an increasingly global game, the options available to aspiring players grow beyond the conventional – and extremely challenging – route to the NFL. Walker noted that there are leagues in Europe and Australia, and said he even knows some players in Japan. For many, though, Canada is a nearby and appealing option, he said.

“There’s a lot of people that head up there, kind of like ‘Oh, I’ll do one year and then I’ll go back to the NFL, or do something different,’ and they just fall in love with it,” he said. “And you know, I was certainly one of those people.”

Sutton, who has an uncle from Canada and a French-speaking grandmother, said he’s excited to get up to Montreal. The CFL announced Monday that training camps are slated to start July 10.