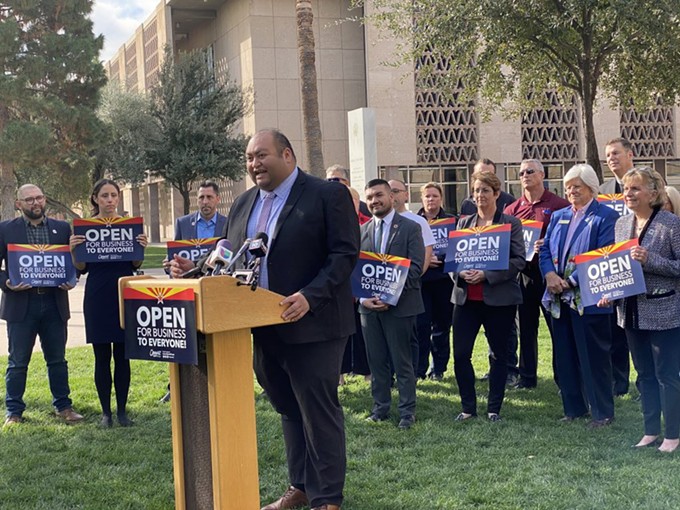 Courtesy Daniel Hernandez for Congress
Daniel Hernandez: "Gabby Giffords continues to inspire me and I strive to follow her example of service for our community."
<![endif]—>

State Rep. Daniel Hernandez (D-announced today that he was launching a campaign for the congressional seat now held by U.S. Rep. Ann Kirkpatrick, who announced earlier this year that she would retire after this term.

“As a lifelong Arizonan from a working class family, I know firsthand that people in Southern Arizona want results from their representatives, and as our community recovers from this pandemic, that’s never been more important,” said Hernandez in a prepared statement announcing his campaign. “In the Arizona State House I have fought for investments in our schools, our hospitals, and our roads and bridges. I have worked across the aisle to pass laws protecting survivors of sexual assault and repealing discriminatory laws against the LGBTQ Arizonans. I’m running for Congress to keep up that fight for our values and deliver real results to make our community stronger.”

Hernandez is best known for being the first person to administer first aid to Gabby Giffords after she was shot through the head by a crazed gunman at a Congress on Your Corner event in January 2011. Hernandez was then an intern for Giffords, but in 2016, he won a seat in the Arizona House of Representatives in Legislative District 2, which includes downtown Tucson, Green Valley, Sahuarita and Nogales.

Congressional District 2 now includes the Catalina Foothills, central and eastern Tucson and all of Cochise County and has been one of Arizona’s most competitive districts, being held by Democrat Ron Barber for one term, Republican Martha McSally for two terms and now Kirkpatrick for two terms. But with redistricting underway, the boundaries will change ahead of the 2022 election.

The spelling of state Sen. Kirsten Engel's name has been corrected in this article.