Posted By Zoha Tunio, Aydalí Campa, Sarah Suwalsky, Kenneth Quayle/Special for Cronkite News on Thu, May 13, 2021 at 6:51 AM 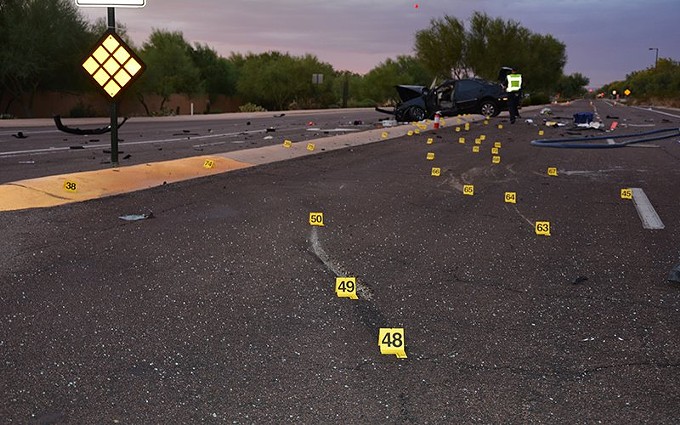 PHOENIX – Ramon Angel Carrasco and his girlfriend were driving home from a Scottsdale bakery in a white BMW in August 2019 when Robert J. Foster pulled up next to them in a light blue Lamborghini.

According to a witness account provided to police, Carrasco and Foster revved their engines at a red light on Hayden Road before heading north, and within seconds they were traveling more than 100 mph.

Meanwhile, Cynthia Ann Fisher was driving south on the same stretch of Hayden. The 68-year-old hairdresser had just left the grocery store and was planning to make breakfast the next morning for a new roommate, said Leah Stenzel, her friend and boss.

Fisher was turning left onto Williams Drive when Carrasco’s BMW struck the passenger side of her black Camry, propelling her car 160 feet from the impact, according to police records. Fisher, who was a minute from her home, was declared dead at the scene.

Carrasco and his girlfriend, Jaymi Lynn Chagolla, suffered minor injuries. Carrasco told police he had nothing to do with the Lamborghini and refused to speak further without an attorney present, but Chagolla confirmed what multiple witnesses who called police had reported.

“Yes, we did a pull against a Lamborghini,” she said when police asked whether the cars were racing.

For days, Stenzel didn’t know her friend had been killed. After Fisher missed three consecutive shifts at the salon and medspa, Stenzel went to her house and learned the news from Fisher’s neighbors. She left behind two sons and a granddaughter.

Carrasco, now 24, and Foster, now 61, face murder and other felony charges in the crash, but despite witness statements and Chagolla’s confirmation to police, neither driver faces charges for street racing. Chagolla was not charged with any crime.

Fisher is among at least five people in the Phoenix area killed in street racing accidents since 2019, according to analysis of law enforcement documents from Valley agencies.

In February 2020, Felix Cardoza, 18, died when he struck a concrete retaining wall on State Route 51. In November, Nicholas Meath, 21, raced against Cameron Groom, now 28, before his car collided with a pillar at a resort in Scottsdale. Meath died at the scene. And in January 2021, Alejandro Bautista, 20, was racing another vehicle in Phoenix before he hit a pedestrian, Cesar Santos, 31, who died from the impact. Earlier this month, Andrew David Friedlander, 34, was charged with manslaughter after a suspected street racing incident that ended when his vehicle crashed into a Jeep driven by Charissa Coleman, 28, who was killed.

Despite the danger, some drivers say illegal street racing is a part of their lives they’re not willing to give up.

Eric Rodriguez’s eyes light up when he talks about his car and how street racing is a release like no other.

“For some people, it really is an adrenaline rush,” the Phoenix resident said. “And that’s what gets people addicted. That’s what got me addicted.”

City and state officials have responded by forming special task forces and increasing penalties for street racing, including higher fines and lengthier vehicle impounds. However, a review of incident reports and court records shows law enforcement agencies in Maricopa and Pima counties handle this deadly crime differently, which may undercut their efforts to combat it.

Law enforcement officials say street racing is not a new phenomenon. But in 2019, something changed. Phoenix police determined the problem had “size and organization,” said Sgt. Joseph Mills, who leads the department’s street racing task force.

The investigation led police to discover gatherings where hundreds of cars would take over private parking lots, warehouses and intersections, Mills said.

Phoenix police set up its task force in November 2019 and sought additional funding from the state.

That’s when the Arizona Governor’s Office of Highway Safety realized the problem was statewide. Over the past year, Director Alberto Gutier said, his office has given enforcement agencies hundreds of thousands of dollars to disrupt street racing activity and enforce state laws.

Highway safety office documents show Phoenix police received grants for more than $200,000 to combat street racing from January 2020 to January 2021. This year, Scottsdale police got $110,000, and Tucson police received $30,000, according to officials and statements from each agency. The departments used most of that money to pay for officer overtime associated with the efforts.

In Phoenix alone, police last year received more than 1,000 911 calls related to street racing and made more than 160 arrests, according to police data.

Although Mills said street racing in Phoenix has been rising for several years, police in Scottsdale and Tucson said the COVID-19 pandemic might have helped racing incidents proliferate, attributing the rise to boredom and less traffic. In Tucson, police received significantly more public complaints in 2020 about street racing than in any previous year, Lt. Robert Garza said.

Combating the problem is complicated by inconsistent enforcement across the Valley, and penalties may not necessarily deter racers.

State law defines street racing as “a race, speed competition or contest, drag race or acceleration contest, test of physical endurance or exhibition of speed or acceleration or for the purpose of making a speed record on a street or highway.” It’s a misdemeanor, with fines beginning at $250 and sentences of up to six months in jail for the first offense and rising to $500 – and more jail time – for subsequent offenses. If a second offense comes within two years of the first, the charge is a class 6 felony. The more common charge, criminal speed, is a lesser misdemeanor and can lead to a sentence of up to 30 days in jail.

Scottsdale police Lt. Chris DiPiazza said officers use their discretion and often ticket racers for speeding because the racing statute can be hard to prove.

“Excessive speed is pretty simple,” he said. “If you have them on radar visual that they’re doing 100 miles an hour, it’s a lot easier to prove that case. It takes less resources.”

In the crash that killed Foster, Carrasco and Foster were charged with multiple felonies, including second-degree murder and aggravated assault with a dangerous instrument. Foster also is charged with leaving the scene of a fatal accident. But neither was cited for violating the street racing statute. Melvin McDonald, Foster’s attorney, said misdemeanors such as street racing usually aren’t a factor when felony charges are involved.

The Pima County Sheriff’s Department takes a different approach, leaning on language in the state statute that allows law enforcement to cite not just drivers, but passengers, too.

In January, Pima County sheriff’s deputies spotted a large gathering on Swan and Los Reales roads, a known location for street racing in Tucson. Officers in a plane monitored activity until deputies could arrive. Swan Road was blocked, cars were stopped and 34 arrests for street racing were made. Both drivers and passengers were cited.

In March, Phoenix approved an ordinance that imposes a $600 fine and allows police to impound or immobilize for 30 days any vehicle found in violation of the street racing or reckless driving statutes.

“This ordinance shows street safety is a top concern of this council and we will continue to take steps to keeping our residents safe,” said Betty Guardado, who represents District 5 on the City Council.

Police also are encouraging drivers to race legally, at such tracks as Tucson Dragway, which closed to the general public because of the pandemic but has reopened in the past few months as restrictions have begun to ease.

“We’re trying to partner with (the dragway), not necessarily to promote the business by any means, but just to let people know that there are legal ways and legal avenues that you can go so that doesn’t put the community at risk,” Garza said.

Karlie Tuttle, 16, grew up in the racing scene in the Phoenix area and competes as part of her family’s racing organization, 6Sixty Race Family. In March, she beat her friend Christian Paulauskis in her second race at the legal raceway Tucson Dragway.

“Some (racers) just don’t come to the track because they feel like it’s fake,” she said. “It’s still the same type of racing, but it’s in a better environment.”

Sgt. Donald Hess of the Maricopa County Sheriff’s Office is among those who believe tougher penalties, such as extended vehicle impounds, would help bring the numbers down.

“You take their pride and possession, their vehicle, that they’re doing this with and impound it,” Hess said. “That’s a start, you know. You put them out of business while you got their car impounded.”

At the state level, state Sen. Paul Boyer, R-Glendale, proposed a bill this year to increase penalties for street racing. Senate Bill 1533, which would impose higher fines and a statewide seven-day impoundment for vehicles, is awaiting passage in the House.

“If it’s your vehicle and you’re committing this dangerous criminal act, then I do think there has to be consequences,” Boyer said.
Gutier, with the highway safety office, said he hopes Boyer’s bill becomes law.

“We need to do something that’s more drastic,” he said, “so people understand the dangers of street racing.”

After failing to reach a plea deal, Carrasco is awaiting trial. Police located Foster 12 days after the accident, near his home. He told police he was in the area of the accident that night but said he had turned off Hayden Road before the collision. Each driver has pleaded not guilty, according to court records.

Stenzel, Fisher’s friend and employer, said she encountered two cars racing earlier this year, weaving in and out of traffic at speeds significantly higher than the limit, while her 18-year-old daughter sat in the passenger seat of her car.

“It gave me the greatest anxiety, and I was so pissed because, you know, you remember how Cindi died and it’s just so senseless,” Stenzel said, referring to Fisher by her nickname. “I just don’t understand it.”

This article was produced by the Howard Center for Investigative Journalism at Arizona State University’s Walter Cronkite School of Journalism and Mass Communication, an initiative of the Scripps Howard Foundation in honor of the late news industry executive and pioneer Roy W. Howard.

Southern AZ COVID-19 AM Roundup for Thursday, May 13: Mobile vax units at Wheeler Taft Library and Greyhound Park today; Here are other spots to find your shot