WASHINGTON – Open it, and they will come.

A special open enrollment period for Affordable Care Act coverage drew 528,005 new enrollees nationwide in its first six weeks, with 9,569 of those consumers in Arizona, according to a report from the Centers for Medicare and Medicaid Services.

Enrollment from Feb. 15 to March 31 was two to three times higher than the same period in previous years, although spring enrollment then was available only to those with qualifying life events like a birth or job change. But advocates were encouraged by the numbers from this spring, which they said show the underlying demand for coverage.

“I think that largely shows that people need coverage, and having a special enrollment period extended during a pandemic is exactly the kind of policies that we need,” said Sarah Coombs, director for health system transformation at the National Partnership for Women and Families.

President Joe Biden ordered a special open enrollment period just days after his inauguration in January, to counter what the White House called “four years of attempts to strip health care from millions of Americans” during the Trump administration. Biden originally called for the open enrollment to run from Feb. 15 to March 15, but that was later extended to Aug. 15 by Health and Human Services Secretary Xavier Becerra.

Since the special enrollment period started, Congress approved the administration’s $1.9 trillion American Rescue Plan, which includes funding that will lower health insurance premiums through tax credits for people who buy their insurance through the ACA’s federal marketplace. That includes consumers who enrolled in 2020, but can use the open enrollment period to see if they can get a lower premium.

Effective April 1, the American Rescue Plan provides “major improvements in access to and affordability of health coverage through the Marketplace by increasing eligibility for financial assistance to help pay for Marketplace coverage,” according to CMS. It estimates that four in five people who enroll through healthcare.gov will end up paying less than $10 a month in premiums after their tax credits are applied.

Coombs said the subsidies “will make a huge difference to people’s pockets, and in people’s decision-making in getting coverage.”

The Kaiser Family Foundation estimated that 11.4 million Americans have insurance through a state or federally run marketplace under the ACA, also known as Obamacare. In Arizona, 153,020 people were insured through the marketplace last year.

The number of uninsured hit historic lows in 2016, but have been rising steadily since then, according to Census Bureau data. It said the percentage of people without insurance in the U.S. rose from 8.6% in 2016 to 9.2% in 2019, while the rate in Arizona grew from 10% to 11.3% in the same period.

Coombs thinks that because of the American Rescue Plan, enrollment will continue to increase, since more people are now eligible for these subsidies.

HHS also announced last week that it plans to make $80 million available for ACA “navigators,” or specialists who can help guide consumers through the insurance marketplace as they look for plans. That funding had been steadily reduced under the Trump administration, from $63 million in 2016 to $10 million last year, the department said.

The navigator grants will not go into effect until the next open enrollment period, but will make a huge difference once they do, according to Laura Packard, the executive director of Get America Covered.

Coombs said the reinvigorated navigators program will promote outreach and education for people who may not even realize they are eligible for low- or no-cost premiums under Obamacare.

“Right now, so many folks can qualify for zero-dollar premium plans or $50 premium plans and many folks are not aware of that, so there’s a mass marketing campaign accompanying actual assisters in enrolling folks,” she said.

Coombs has first-hand experience with coverage under the act.

“Before the ACA, I had to pay for birth control and I remember the first time I went to CVS, and I was thinking I would pay my regular copay. And when that law was enacted, they were like, ‘Oh no, it’s free,’ and that means a lot,” she said.

“That makes a huge difference for someone who those $10, $15, $20 co-pays means their next meal, means their access to transportation to go to work,” Coombs said. “Little things like that have made all the difference.”

While they welcome the progress in the current open enrollment period and under the American Rescue Plan, Coombs and Packard are already looking forward to more relief from the Biden administration. The American Families Plan that Biden introduced in a speech to Congress last week includes a provision that would make premium reductions in the American Rescue Plan permanent.

“What we’re going to advocate for, especially in the next recovery package, is that we actually make those provisions, if not permanent, last at least for the next 10 years,” Coombs said. “We’ve seen what making coverage more affordable does. It increases enrollment, it increases more access, and coverage is the first critical step to accessing care.”

“These need to become permanent. These are deficits in the original Affordable Care Act that were never able to be fixed because we never had the votes,” she said of the changes in the American Rescue Plan. “There was never a majority in the House and the Senate and a president willing to sign it, from 2010 when it was signed into law until now.”

Southern AZ COVID-19 AM Roundup for Thursday, May 6: No vax appointment necessary at CVS, same-day appointments at Walgreens; New mobile clinics hit the road this weekend; Other ways to get vaccinations 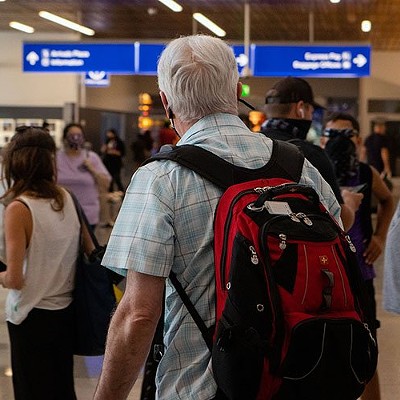