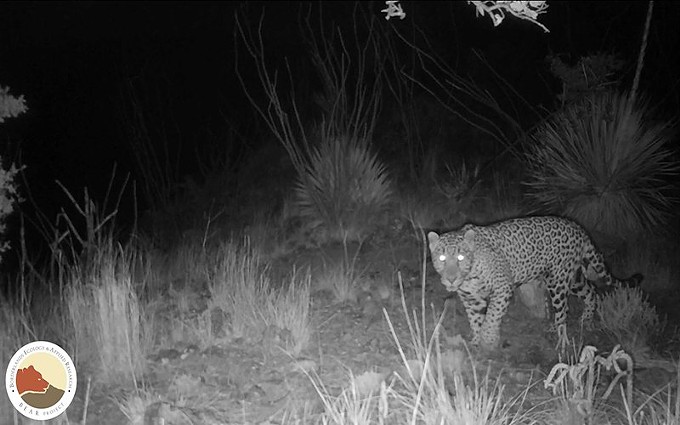 Ganesh Marin/University of Arizona
This young male jaguar, El Bonito, was spotted near the border between Mexico and Arizona, suggesting that the felines could eventually migrate north.

TUCSON – Although jaguars are widely assumed to live exclusively in Mexico, Central and South America, they once prowled Arizona, New Mexico and Texas before colonizers and poachers in the 19th century drove most of these beautifully spotted big cats out of the U.S.

So when Ganesh Marin was studying ecosystems along the border U.S.-Mexico this year, the University of Arizona Ph.D. student wasn’t expecting to see a young jaguar sauntering in his video feed in mid-March.

The far-ranging jaguar has been on the endangered species list for nearly 20 years because of deforestation, ranching, farming and poaching, and experts estimate only 15,000 are left in the wild globally. But there now is a glimmer of hope that Panthera onca – the largest cat in the Americas and a creature venerated in many Indigenous cultures – might one day return to its range in the U.S. Southwest.

“The goal of my research was not originally to find any jaguars,” Marin told Cronkite News. “I was working with my graduate adviser to observe the ecosystems that lived along the border and see how the diversity of those systems changed.”

Marin’s observations were meant to identify the ecosystem’s key players, and the young jaguar, despite being an unexpected variable, showed a potentially much bigger picture.

Jaguars – all of them male – occasionally have been seen in southern Arizona over the past decade, to the delight of researchers and schoolkids in Tucson, who gave the cats such names as Macho B and El Jefe. But the last known jaguar populations that included females were nearly 100 miles south of the border in Sonora, Mexico, Marin said.

“Jaguars used to live as far north as the southern part of the Grand Canyon,” he said. “But because of this jaguar, since he’s a juvenile, we believe that the female population may be expanding north as well.”

Although the expansion of a population of predator cats may seem alarming to the average outsider, Marin and his adviser, John Koprowski, who’s now the dean of the Haub School of Environment and Natural Resources at the University of Wyoming, see hope that the animals are able to maintain a connection with their North American range.

“The fact that this jaguar Ganesh found is so close to the border means there are enough resources there for it to survive,” Koprowski said. “The fact that we have a young male who was clearly born somewhere else and able to find his way to the border shows positive signs of connectivity between the ecosystem on one side of the border and the other.”

This connectivity is something the United States has been trying to foster over the past few years especially. The U.S. Fish and Wildlife Services established a recovery plan in early 2019 designed to host six jaguars in a strip of territory along the border. The hope is to spur discussions about national conservation efforts with officials of Southwestern states.

“The state of Arizona, in particular, has had a hand in the conservation of jaguar habitats as well,” Koprowski said. “On our end, we do the best to provide the science that enables larger groups of people to take action in the protection of these habitats.”

But the effort to protect these jaguars while establishing connectivity exists on both sides of the border. Marin said there have been consistent efforts to make the people of Mexico aware that the borderlands are a rich area for increased biodiversity, especially now that jaguars are making their way toward it.

“We’re working with cattle ranchers to make them aware of the migration and keep the jaguars out of harm’s way,” Marin said. “If the jaguars choose to move this way, it also opens up potential doors for pumas and bobcats and other species.”

But of course, these cats won’t be making their way up Interstate 19 on their journeys. Although connectivity exists, it isn’t yet apparent how jaguars and other species would make their way into new habitats or back to old ones.

“We’re letting them lead the way,” Koprowski said. “These animals are most likely to find the path of least resistance. There’s no set route for them, so we’re going to let them show us where they’re going once they decide to venture over, and draw patterns from there.”

Thrift shops and sustainable fashion outlets thrive during the pandemic