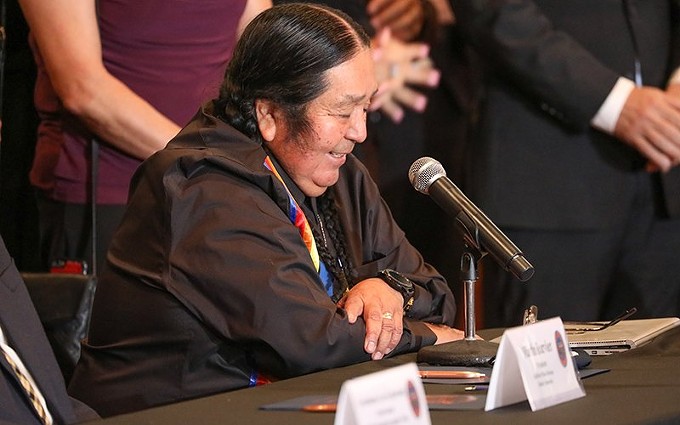 PHOENIX – After years of resistance from tribes around the state, Gov. Doug Ducey signed House Bill 2772 on Thursday, legalizing daily sports fantasy and sports betting in Arizona. The development comes on the heels of ratification of a revised Tribal-State Gaming Compact.

“Today’s signing is the culmination of years of discussion and engagement among many diverse stakeholders, tribal communities, both rural and urban, gaming industry partners and more,” Ducey said at a news conference to finalize the legislation.

“We did it by bringing everyone to the table, pushing individual agendas aside and putting Arizona first. The legislation associated with this compact amendment is a historic bipartisan achievement.”

Senate Bill 1797, a mirror bill to HB 2772, was ratified by a bipartisan majority earlier this week by the state Senate. These amendments to the existing compact grant specific organizations and groups sports betting permits to create sportsbooks in their particular venue. Ten licenses will be granted to sports organizations to open these books in or near their sporting facilities. An additional 10 licenses will be given to tribal nations to open sportsbooks at their respective casinos.

“The fund helps us provide basic government services, build and maintain infrastructure, provide economic development to build our economy and protect our Hualapai elders and children,” said Damon R. Clarke, chairman of the Hualapai Tribe. “We made a promise to Arizona, that we would use gaming revenue to secure a better future built on self-reliance. And we’ve kept that promise. Looking ahead, tribal gaming will continue to evolve.”

The new compact will allow as many as four new casinos in the Phoenix area.

Sixteen of the recognized 22 tribal nations of Arizona were present at Thursday’s ceremony. Stephen Roe Lewis, governor of the Gila River Indian Community, said he had doubts that the tribes would agree to new terms of the gaming compact. He reiterated how arduous the entire process had been, with countless meetings and years of continued work coming to fruition.

“As I look at the audience today,” Lewis said, “I’m struck by the wide array of people and viewpoints represented. We have 16 tribes represented today. From rural to urban, gaming and non gaming. We have Democrats and Republicans. All very different, yet here we all are. Unified.”

Added Ducey: “This would not have gotten done without your leadership and your participation with this significant bipartisan achievement. All these individuals have earned their place in the history books among those great Arizona leaders of the past who put Arizona ahead of partisanship.”

Sports organizations wasted no time in setting up a timetable for their sportsbooks.

The PGA and DraftKings announced a partnership with TPC Scottsdale to implement mobile sports gambling and a premium sportsbook for the Waste Management Phoenix Open golf tournament.

“We are certainly going to be trying to put everything together as soon as possible,” he said. “We have begun to explore what that looks like in terms of physical space, as well as an online platform. We have been talking with a number of potential partners. Our goal would be to try to do as soon as possible, more than likely it will happen in the offseason getting ready for the next season.

The potential increase in revenue with both the legalization of sports gambling and a new gaming compact have people on both sides of the aisle feeling optimistic.

“I think we can call this a win-win-win, for the tribes, for the state and for the taxpayers,” Ducey said.