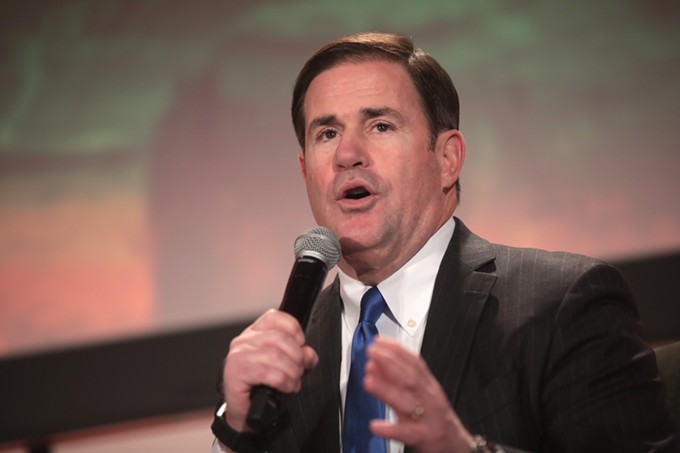 Few people will argue that Gov. Doug Ducey has done an outstanding job in battling the coronavirus in Arizona. Twice, the state has been a global hotspot for the outbreak; he refused to shut down nightclubs (including those owned by the family of his own healthcare advisor) until the disease got so out of control that most public schools had to launch the fall semester remotely; he thinks so little of testing to determine the extent of infections and path of the virus that he wants to stiff Pima County on testing expenses despite getting hundreds of millions of dollars from the federal government to do just that; he totally botched the rollout of the state’s online vaccination registration system; and when he got tired of taking heat from the press in weekly COVID press conferences, he just quit having them.

But Ducey’s latest move may be his most appalling: Telling the federal government that Pima County didn’t need additional vaccination clinics.

But first, FEMA had to run the plan by the state. And that’s when Ducey said no.

Asked about Ducey’s shot-blocking of Pima County last week, Arizona Health Director Cara Christ said too many state resources would be used for the setup—which is laughable on its face, given how Ducey is squirreling away COVID relief dollars so he can once again cut taxes for Arizona’s wealthiest residents.

But let’s say Arizona is just too broke to speed along the vaccination process for Pima County residents. Ducey could have reached out to Pima County officials to find out if they’re willing to foot the bill, but he didn’t bother. (That’s not surprising, given that in his imperious way, Ducey rarely talks to his fellow elected officials when making his COVID decisions.)

“Pima County is prepared to provide any and all assistance in setting up this POD such that it does not require resources from the state,” they wrote. “In addition, the vaccine supplied by federal policy will not deduct from the state vaccine allocation.”

The local elected leaders said that the POD “potentially provides another 300,000 or more vaccines that would be targeted for our low-income and minority communities. We understand the state has declined to accept the federal offer for a variety of reasons. We would appreciate you reconsidering this position in asking the Federal Emergency Management Agency (FEMA) to establish a federal POD in Pima County.”

We can only speculate on why Ducey turned down the FEMA offer. (The resources spin is obviously a dodge, given the state’s strong financial position.) Does he not want the Biden administration to get credit for vaccinating people in Arizona? Does he not care how long this stretches out? Does it somehow distract from his recent efforts to appear to be the big hero of the crisis? Does he just hate Pima County?

Whatever is going on in his head, Ducey should quit acting like an absentee stepdad who needs to be in control of everything on the rare occasions he decides to help out. He needs to approve Pima County’s federal site immediately. The sooner people are vaccinated, the sooner we’ll be past this pandemic. And hey, if he blames it on some underling, Ducey can pretend to be a hero again!

The Skinny: The real fraud is about the GOP’s latest audit, not the 2020 election