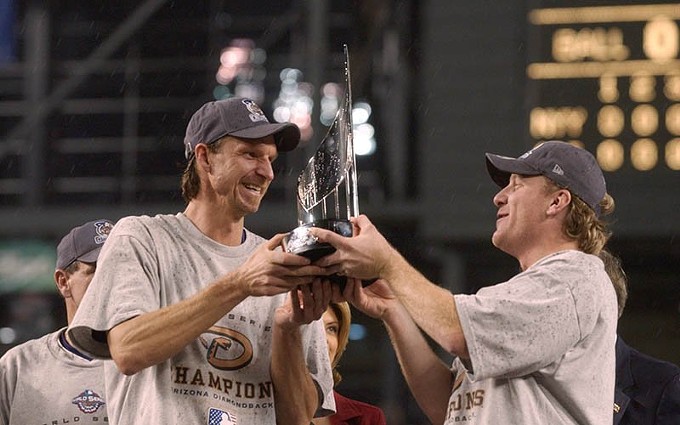 Harry How/ALLSPORT
Co-MVPs Randy Johnson (left) and Curt Schilling of the Arizona Diamondbacks celebrate after game seven of the Major League Baseball World Series at Bank One Ballpark in Phoenix in 2001.

PHOENIX – Arizona is in a drought. That’s not exactly breaking news, but all the water in the world won’t quench the thirst of pro sports fans around the Valley.

With no disrespect toward the Mercury or Rattlers, who have been like water bottles found in a sea of sand that is the Arizona sports market, the so-called four major professional sports franchises have come up dry every year except one.

There is hope that the Cardinals, with an electrifying franchise quarterback in Kyler Murray, and the Suns, led by burgeoning star Devin Booker, might soon provide relief, but the Diamondbacks, Cardinals, Coyotes and Suns have still combined to win exactly one championship.

The Diamondbacks delivered in 2001, defeating the New York Yankees in a memorable World Series. But they are the only major pro team to win a championship and that was nearly two decades ago.

The Arizona sports landscape has been particularly barren since 2010, a stretch during which all four teams have spent many seasons on their league’s bone pile.

“The last 10 years has been an absolute drought in the Valley,” said Scott Bordow, who has covered sports in Arizona for almost 40 years with the East Valley Tribune, the Arizona Republic and The Athletic.

The four franchises have lost their way for varying reasons.

One problem for the Diamondbacks, Brodow said, is “competing in the same division with the Dodgers, and it’s very difficult to compete with the Dodgers when their payroll is more than twice as much as you are.”

Chase Field was once used to October games, with the Diamondbacks capturing three division titles in four years between 1999-2002. The team has won the National League West only once since 2008.

Not coincidentally, the Dodgers have won the league title eight years in a row, beginning shortly after the club was purchased by the Guggenheim Baseball Management, an investment group led by Mark Walter that includes former Los Angeles Lakers star Magic Johnson and which opened the payroll vault after paying more than $2 billion to purchase the club.

Dave Burns, of 98.7 FM’s Burns and Gambo show, pointed to the many years the NFL Cardinals were not “doing everything within their power to be the best NFL team they could be.”

Much of that changed when what is now known as State Farm Stadium opened in 2006, creating lucrative new revenue streams for the team. Still, despite a Super Bowl XLIII appearance in February of 2009, the Cardinals have not delivered a Lombardi Trophy.

Burns pointed out that stability has been lacking in the Coyotes organization, as the team has “gone through more owners and more bankruptcy hearings.” In fact, the most consistent aspect of the NHL franchise was the presence of Shane Doan, who retired in 2017 after arriving in the Valley with the team when it relocated from Winnipeg and changed its name before the 1996-97 season.

Meanwhile, the Suns – once a regular in the NBA playoffs who twice played in the NBA Finals – went into a tailspin and, Burns observed, “for a pocket of 10 years or so were in this rebuilding phase.”

Since their Western Conference finals appearance in 2010, the Suns have managed only one winning season and have not returned to the playoffs.

Of the 13 sports markets to have at least one team in each of the big four sports leagues (NBA, NHL, NFL, MLB), a strong case can be made that Arizona’s franchises have collectively performed the worst for the last 10 years.

The only other market that can compare is Minnesota, where there are 10,000 lakes brimming with the tears of sports fans.

The NBA Minnesota Timberwolves have only had one winning season, the NHL Minnesota Wild had a nice stretch but never made it far into the playoffs, the NFL Vikings have been like a yo-yo and baseball’s Twins have managed to get to the playoffs but have lost 18 straight postseason games.

Meanwhile, Arizona’s pro teams have stumbled across the occasional oasis in the desert, including that unexpected 2010 Western Conference finals appearance by the Suns or the 2015 NFC Championship appearance by the Cardinals. More often, however, each season has led only to the mirage of championships.

“They’ve had their moments, but it’s sustained winning that really is the key for the fanbase to build,” said Jude LaCava, a former decades-long Fox 10 sports reporter and one-time Valley radio talk show host.

One reason commonly brought up for the lack of success is the amount of fans. In theory, the more fans a franchise has, the easier it will be to attract star players and draw big crowds, which provide more of a homecourt, homefield or home ice advantage.

However, the grassroots don’t run deep in the desert.

“We’re a market full of transplants … and because of that very basic fact, we have partial interest” LaCava said.

Those who come to Arizona from other parts of the country often bring hometown allegiances with them. They’ll wait an hour in a drive-thru for White Castle burgers, but not for tickets to see the local teams – unless the local teams happen to be playing their hometown team.

The Grand Canyon State’s wonders can also be a distraction for local fans and their relocated brethren.

“Living here in the desert is beautiful, the weather is great so it’s easy to go outside and golf or hike or fish or boat or ski … it’s not like watching the game is the only thing to do in Arizona,” Burns said.

Even those who do become fans behave a little differently than die-hards in other markets.

“Fans don’t get angry here, they get apathetic. And that’s the worst thing for pro sports franchises,” Bordow said.

But these sports observers and experts believe there is some reason for optimism, especially for the Cardinals and the Suns. LaCava said the Cardinals franchise “certainly has a chance to make some noise in the postseason over the next few years.”

Fans will have to wait until the Cardinals and Murray open training camp during the summer to get too excited about the NFL season, but the NBA season is in full swing and the Suns are one of the surprise teams in the league.

They are shining bright this season, winning more than twice as often as they have lost through the first 37 games.

Arizona has proven to be one of the toughest markets for professional teams to win in, but Bordow believes it can be done.

“You just have to do it right,” he said.

The drought has to break at some point, and as Burns put it, “sometime in the next 10 years, we’re looking at a championship from somebody.”

And, who knows? Maybe when it finally rains, it will pour like an Arizona monsoon.