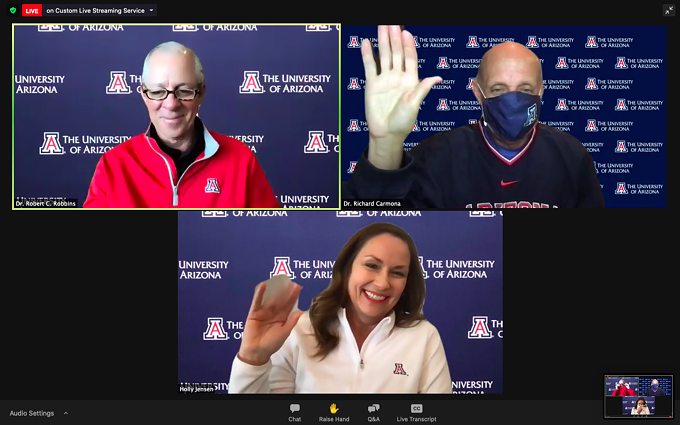 The University of Arizona will move to Stage 3 during the week of March 29, allowing in-person classes and flex in-person classes of up to 100 students, UA President Dr. Robert C Robbins announced in a briefing this morning.

On Feb 22, the university moved to Stage 2, offering in-person learning to courses with 50 or fewer students. They will continue in Stage 2 for the next two weeks.

On campus, the rate of positivity remains low, with fewer than 0.2 percent of the more than 13,000 tests in the past 10 days.

In Pima County on the week of Feb. 21, the rate of positivity dropped to 5.3 percent, nearing the goal of 5 percent for classification of minimal transmission. For the same week, the county had 78 cases of COVID per 100,000 residents, while 3 percent of reported hospital visits were for COVID-like illnesses.

While these metrics continue to decline, a total of 39 cases of the UK variant have appeared in Arizona. On March 12, the Arizona Department of Health Services (ADHS), the Yuma County Public Health Services District and Translational Genomics Research Institute (TGen) reported three cases of the Brazilian variant (P.1.).

Robbins said with the help of their expert team, they feel confident that it’s safe to move forward.

“Despite the variance, the incidence and prevalence of COVID-19 continues to be low, particularly on the campus,” said Robbins. “There's not been any major outbreaks on the campus throughout, over a year of this.”

The University of Arizona state POD administered 15,354 vaccines the past week of March 8 to March 14, with a total of 63,745 vaccines since January.

Reentry Task Force Director Dr. Richard Carmona emphasizes that the decisions are made after looking at all the information bundled together. If they are stable for at least a couple of weeks, then they’ll move forward.

“We've had a couple of weeks of stable data, there's plenty of resources in the community should things turn, but we're also counting on all of the students, faculty and staff continuing to do those good public health practices, because if we revert back to the old normal we’ll accelerate the disease,” Carmona said.

The University of Arizona began registration for vaccine appointments for those 55+ on March 13 for appointments as soon as Monday.

Vice President of Communications Holly Jensen addressed some of the confusion over the vaccine eligibility. She said the state is now moving through age bands, instead of moving to the next classification from 1B to 1C.