There are two high-profile animated movies in theaters right now, and both of them also have streaming options.

One of those movies is a total piece of garbage, the other is a heartwarming, rousing adventure that is very much worth the money you will plunk down to either see it in a theater or rent at home.

See which one is which in the reviews below:

The latest Disney animated movie checks off all of the boxes when it comes to what Disney fans are looking for in an animated adventure, and then it checks off a few more, unexpected ones.

Title character Raya is the latest addition to the “Disney Princess” sub-franchise, a terrific character creation voiced by Kelly Marie Tran of the last two Star Wars movies (the second of which her character was brushed aside…oh, don’t get me started). She lives in the ancient land of Kumandra, a world once inhabited by happy dragons but currently cursed by a plague that has turned most of the animal life (including the dragons) to stone.

Raya’s mission to restore her land leads to the awakening of Sisu the Dragon, voiced by Awkwafina in the sort of vocal triumph that reminds of Robin Williams in Aladdin and Eddie Murphy in Shrek. Sisu can also morph into human form, and both her dragon and human forms  look quite like the actress voicing them (the wide smile, the big eyes, those awesome eyebrows). And, of course, both have her distinctive vocals, tailor made for this kind of movie.

The four directors who put this movie together, along with a quite the roster of writers, have inhabited this film world with enchantment, great action, and solid laughs. One of the film’s best running gags would be the “Con Baby,” an infant plague survivor who manages to display superhero qualities while occasionally throwing her diapers at those who dare to chase her.

The story winds up being a terrific take on redemption, and the finale (which owes a little bit to Avengers: Endgame) will leave the family in the kind of tears. Brightly animated, cleverly written, and masterfully constructed, it’s a movie that will put a smile on your face and get your young daughters interested in martial arts and dragons.

I hated Tom & Jerry when I was a kid. And, as things turn out, I hate them equally as a grown up adult-typed person thing. It’s just a cat being mercifully tortured by a mouse, a one-joke slog-a-thon.

Granted, Itchy and Scratchy, the spoof of Tom & Jerry that has long appeared on The Simpsons is classic, and wouldn’t exist if it weren’t for Tom & Jerry, so I guess I have to be a little grateful to the duo.

On second thought, nope…Tom & Jerry can go to Hell.

Director Tim Story tries to bring some life to a long (thankfully) dead franchise by pulling a Roger Rabbit and mixing traditional animation with live action. Tom the cat and Jerry the mouse, along with all other animals other than humans in this film, are animated, with little effort to really integrate them into the real world. As a result, this movie has a very dull visual palette to go with its crap script.

The original cartoon shorts never had significant plots, and their cinematic vehicle has a thin one that works as nothing but an excuse to see Tom falling out of buildings and crashing into shit.

A young events planner wannabe (Chloe Grace Moretz) goes to a fancy Manhattan hotel looking for a job, fakes a resume (making her instantly unlikeable), and gets a gig planning the big wedding of the year. Jerry the mouse moves into the hotel, with Tom following him there because he’s pissed and all that, so there’s your plot. The planner needs to catch the mouse and uses the cat in her trapping scheme. Now that the thin story is established, let’s break things over Tom’s head.

The humans look miserable, as are we. This is a film that manages to make Michael Pena unfunny. It’s also a movie looking for comedic acting chops from SNL writer Colin Jost, who just has to know he screwed up royally signing on for this one. He plays the guy getting married, and just looks like he is hating life the entire time. Most assuredly, Michael Che should skewer him on Weekend Update for this one.

Rest assured that the wedding in this movie will have elephants so that we can get that classic joke of elephants being afraid of mice. You can also go to bed tonight safe in the knowledge that at some point in this movie Jerry is going to leave a wise-assed note to somebody in a mouse trap. You know, something like “Haha…I’m a mouse and I figured out this is a trap, and I took your fucking cheese anyway. Fuck you!”

Minus the swear words of course. This is a PG movie for kids where you can see Ken Jeong clearly having the word “asshole” dubbed over in his dialogue. Noticing that was the funniest part of the movie for me. Everything else was about as funny as a wise-assed note left by a rodent in place of cheese chunk in a mouse trap. 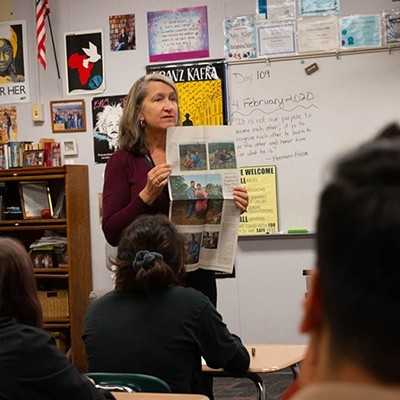 As survivors pass on, more Holocaust education could be headed to Arizona classrooms